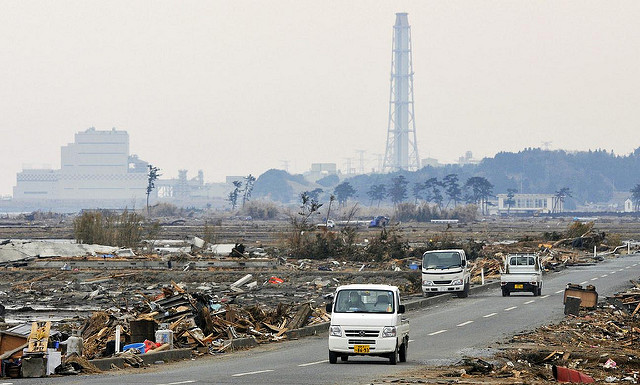 How Japanese Officials Can Atone for Fukushima

The meltdowns and release of radiation from the Fukushima Daaichi nuclear power plant has been an ongoing crisis for five years. Nuclear engineer Koide Hiroaki has been one of the most trenchant critics of how the Japanese government and power company TEPCO (mis)handled the disaster. In a wide-ranging interview at Counterpunch, he offered a way for officials, who have gone unpunished, to atone.

Right now the people of Fukushima have been abandoned in the areas of the highest levels of radiation. And abandoned people have to find a way to live. Farmers produce agricultural goods, dairy farmers produce dairy products, and ranchers produce meat; these people must do so in order to live. They are not the ones to be blamed at all.

As the Japanese state is absolutely unreliable in this matter, these people have no choice but to go on producing food in that place, all the while suffering further exposure. So I don’t think we can throw out the food they produce there under those conditions. Inevitably someone has to consume that food.

Certainly not the residents of the Fukushima area. Hiroaki has a better idea.

We should serve all of the most heavily contaminated food at say the employee cafeteria at TEPCO or in the cafeteria for Diet members [Japanese parliament] in the Diet building. But that isn’t nearly enough. We must carefully inspect the food, and once we’ve determined what foods have what levels of contamination, once that is fully measured and delineated, then those who have the corresponding levels of responsibility should eat it, should be given it.

I am aware that this is a controversial proposal, but each one of us, especially those who built post-war Japan, bears responsibility for allowing our society to heavily dependent on nuclear energy without carefully reflecting on the risks and consequences of it. And more importantly, we have the responsibility for protecting children.

Even after Chernobyl and Fukushima, nuclear energy thrives. Especially in Russia and China, where they are planning to build floating nuclear energy plants. Huh? From CNN on April 28:

China is planning to build nuclear reactors that will take to the sea to provide power in remote locations. … These small power plants will be built in Chinese shipyards, mounted on large sea-going barges, towed to a remote place where power is needed and connected to the local power grid, or perhaps oil rig.

China has 20 planned; Russia seven. Never mind how much the costs would cascade if another disaster occurs. In January 2014, at Warscapes magazine, I wrote that it was difficult to understand how the advocates of nuclear power can continue to block out the risk of major accidents, especially when they are fresh in our memory.:

Fukushima has just occurred before the world has gotten over the last one, Chernobyl. What if another accident occurs while we’re still knee-deep in cleaning up and bearing the costs of Fukushima, and maybe even still Chernobyl? Casualties and damage to the environment aside for the moment, how can nations afford this? Come to think of it, how do nuclear-power companies afford it, yet continue to forge ahead?

To answer the last question: state subsidies to build nuclear energy plants. Also, of course, much of the cost of cleaning up after an accident is, as you would expect, offloaded to the state and its citizens. Bailing out the nuclear energy is of a piece with bailing out the banks.