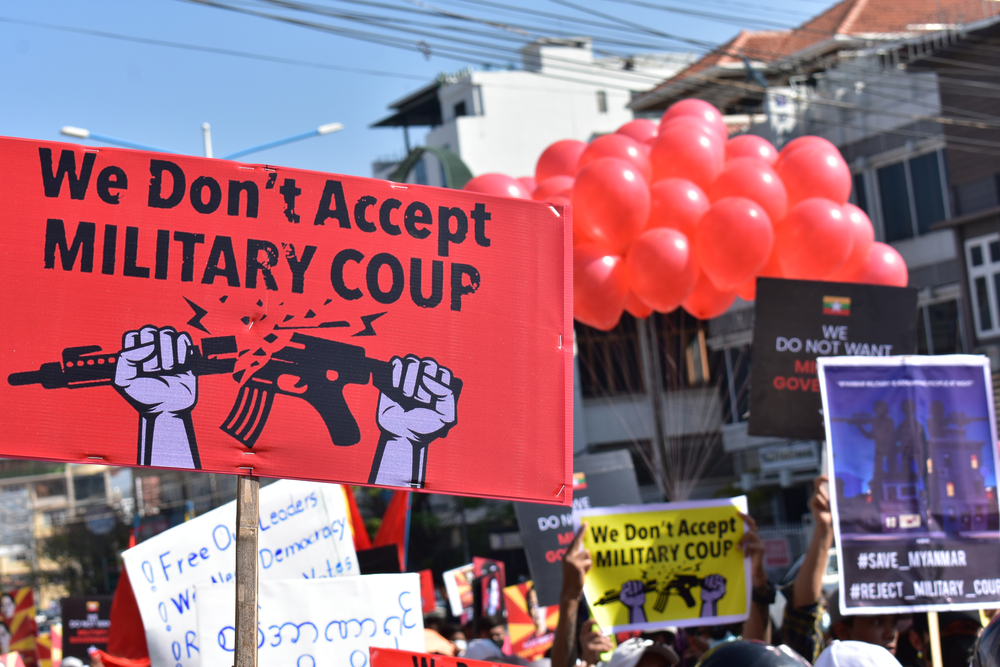 Japan’s Approach to Myanmar: Diplomatic Leadership or Business as Usual?

Are sanctions or quiet engagement the best method of restoring democracy in the Southeast Asian country?
By Aleksandra Babovic, Arbenita Sopaj | April 5, 2021

Japanese academics and diplomats see the crisis in Myanmar as a golden opportunity for Japan to take initiative through proactive leadership within the UN framework. Contrary to the punitive U.S. approach, engagement in preventive diplomacy looks promising in restoring Myanmar’s fragile democracy. Japan is well-positioned to lead that effort, given the country’s ties to both the West and the Association of Southeast Asian Nations (ASEAN) as well as its historically close rapport with both the military and the democratic opposition in Myanmar.

Moralistic considerations and interventionism have not been a driver in Japan’s foreign policy. For instance, Japan supported Aung San Suu Kyi and the National League for Democracy (NLD) government in 2019 when it stood accused of genocide against the Muslim Rohingya. It remained politically neutral when the UN General Assembly condemned Myanmar for abusing the human rights of its ethnic minorities. Similarly, the Japanese government has been rather quiet when, in 2021, the Tatmadaw overthrew the legitimate NDL government, even as civil unrest has spread and police violence has mounted.

Although interventionism in the name of human rights promotion and enforcement has not been a forte of its foreign policy, Japan has been more successful with its low-key soft diplomatic involvement that gains the hearts and minds of populations abroad. The government has relied on organizations like the Greater Mekong Center (GCM) and the Nippon Foundation to broker ceasefires between clashing ethnic groups and the military. At the same time, however, Japan’s civil society is financially mobilized and practically constrained by the state and thus reflects the state’s ideology. Any attempt to challenge that or advocate otherwise could lead to their political marginalization.

Japan’s soft power, especially its contribution to international development and peacebuilding, has earned it a measure of diplomatic prestige in the international arena. According to UN data from 2019, Japan is the tenth-largest contributor of humanitarian assistance in the world.

Will Japan use this soft power to help Myanmar return to democracy?

Despite the postwar narrative of a U.S.-dependent Japan, the country skillfully managed to rebuild itself economically, eventually creating its powerful Official Development Assistance (ODA) in 1954. One year later, a Japanese delegation attended the Bandung Conference, one of the convening parties being Burma. At Bandung, Afro-Asian countries—Communist, pro-Western, and neutral—declared their allegiance to values of political sovereignty and economic development. Japan attended the conference to facilitate its access to raw materials and re-establish itself as a major Asian power, which caused some anxiety to the United States.

Japan has strategically offered development assistance to countries of geopolitical importance for mutual benefit. The ODA program also opened up neighboring markets of raw materials to Japan’s public and private finances, which has, in turn, created a reliance on Japanese products and services. In this way, the Japanese government has pragmatically reconciled its own national interest with the need of countries in the region for development funds. During this period, Japan divided the world between developed and non-developed, rather than being primarily concerned with ideological camps.

A key example of this ideological neutrality can be seen during the 1973 oil crisis when Japan, its energy security endangered, deviated from U.S. policy by supporting the oil-producing Arab nations to avoid the imposition of an oil embargo.

Japan has maintained a long-term engagement with Myanmar and its economy through war reparations and then the ODA program. When Tokyo reformed ODA in the 1990s to include principles of human rights and democratic governance, Japan used development assistance to encourage Myanmar’s political and economic reform. This strategy continued even when Myanmar was under sanctions. The country has been the third-largest beneficiary of Japanese development assistance: $3.7 billion in 2016.

Myanmar’s current turmoil is detrimental to this kind of Japanese engagement, not only the mutual economic benefit but the larger geopolitical goal of nudging the country away from China. As a result of the current round of harsh sanctions, Myanmar has only moved closer to Beijing, which potentially compromises the prospects of restoring democracy. During the Cold War, Japan patiently kept open channels with Myanmar, hoping to play a more prominent role in this geopolitically significant country. That’s why Japanese diplomacy has diverged from the traditional sanctions-based approach of the West to Myanmar.

Most recently, the United States has urged the UN Security Council to impose economic sanctions against the oil and gas companies that finance the military junta. China and Russia have taken the opposite position of supporting the military government. However, the levels of trust between China and the Tatmadaw might be exaggerated. China has funded and militarily equipped rebel groups to increase its leverage in Myanmar’s domestic affairs and ensure that the government keeps its commitments to the Belt and Road Initiative. Nor should India be forgotten as another relevant actor upon which the Myanmar government relies. The level of cooperation with Myanmar—in terms of donations, infrastructural investment, and military coordination—suggests that India is no less important than Japan or China.

The diplomatic space between punitive actions and direct engagement provides an opportunity for Japan to play a more prominent role, especially given its hope one day to gain a permanent seat on the Security Council. At this stage, Japanese politicians may be skeptical of exercising broader leadership, even under UN auspices, for its potentially damaging effect. However, given the already considerable level of involvement of Japanese public finances and business, the stakes are extremely high.

Delicately using its abundant connections at the politico-elite level in Myanmar, the Japanese government can keep the lines of communication open until it can devise an adequate diplomatic solution. The two-tier Quad approach could represent one such venue in which Japan and India—far more sensitive to the realities of Myanmar’s domestic political affairs—use their leverage and the trust they enjoy with the Tatmadaw to open up diplomatic channels to broker the return of democracy prior to the United States and Australia stepping in at a later stage with greater inducements.

The well-known duality of honne (real intention) and tatemae (pretense) in Japanese politics has not always served its interests. The Burmese have grown disillusioned with Japan as a result of several diplomatic gaffes, most recently when the Japanese embassy in Myanmar, reporting on a meeting between the Japanese ambassador and a member of the military junta, referred to the latter as foreign minister in a Facebook post. In an effort to make up for this mistake, Japan immediately promised humanitarian aid to Rohingya refugees, overlooking the potential for the military government to confiscate this money for other purposes. For Burmese who have high expectations that Japan can help restore democracy in the country, these blunders discredit Tokyo’s long-term efforts.

But Japan can still translate its political and economic investments in Myanmar into positive change in the country, with mutual benefit. “Although the Burmans called it reparations, for us it was an investment,” Prime Minister Shigeru Yoshida said in 1954. “Through our investment, Burma would develop and it would become our market from which our investment would return.” Although this recipe is old, it still might represent a feasible approach for the Japanese government in diplomatically complex situations.