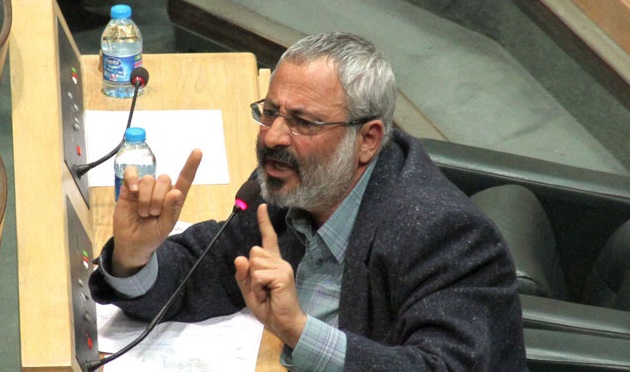 Jordanian Lawmaker Who Sought Reform Accused of Spying for U.S.

Mustafa Hamarneh is engaged in a peaceful “open war” for the future of Jordan.
By Ali Younes | February 17, 2014

When Jordanian lawmaker Mustafa Hamarneh said last week that “Jordanian tribes should not be politically mobilized to advance political agendas” or to be “used in the public space other than being part of the social fabric and a social institution,” it caused a firestorm of protests and attacks that accused him of being “an American agent and a spy” and “wanting to destroy the Jordanian tribes and eventually destroy the Jordanian state itself.” His statements concerning the Jordanian tribes were made in the context of what has become known in Jordan as the “Mubadarah” or the initiative to create a system of  checks and balances between lawmakers and the government.

Speaking to him over the phone in Amman, Hamarneh told me that he is leading a group of 25 lawmakers in the Parliament to work on issues of education, small business, higher education, civil society development and political agendas. He said that he is trying to create a political environment whereby lawmakers can monitor the government agendas and work to make it better and more effective. His initiative is thus bypassing the political blocks within the Jordanian parliament that were created to do the same thing, but have become “dysfunctional” and are “not working” he told me.

Hamarneh who is a Georgetown-educated political scientist and scholar and for 15 years led its center for strategic studies is not shy about his goals and objectives when it comes to Jordan or his work in Parliament.

“This is an open war for the future of my country” he told me in flawless English and seamless American accent. Raising the tone of his voice and sounding slightly confrontational, he said, “I stuck to my guns and I am not backing down.” ”This is what I said and I will say it again, and I have nothing to lose.”

He also said that those who attacked his political initiatives are the “old guards” and some former prime ministers who felt “threatened” by his work to make the Jordanian political system more accountable and more transparent.

Abdel Karim al Dughmi, a lawmaker and former Speaker of the Parliament, led the charge against Hamarneh inside the Parliament building and in the media, accusing him of being “an American agent” and wanting to “destroy the Jordanian tribes in order to solve the Palestinian-Israeli conflict at the expense of Jordan.”

There is strong suspicion in Jordan which is evident in the mainstream media and in the social media that US Secretary of State John Kerry is trying to bring an end the Arab Israeli conflict by making Palestinian residents in Jordan, who are not citizens, citizens of Jordan thus making Jordanians a minority in their own country, according to this view.

Al Dughmi, however, is known as a vulgar politician  and is even better known for making threats against his fellow lawmakers. He once called a television station two years ago during a live a talk show threatening a fellow lawmaker and warned him not to come to the Parliament building the next day.

With aid totaling over $660 million a year Jordan is the third largest recipient of US foreign aid, after Israel and Egypt. In addition, President Obama announced last Friday during King Abdullah’s visit to the US that he will seek to renew the five-year non-binding foreign aid agreement with Jordan after the current one expires this September. In addition the US government has provided Jordan with $1 billion of loan guarantees to help its economy stay afloat.

For Hamarneh, his work to bring reform to the Jordanian political system is nothing new. He said that he was part of the “Royal commission for the National agendas” in 2005 that that was tasked to streamline the Jordanian political system and make it more accountable. Another Jordanian lawmaker Mohamad Al Hejouj told me that he supports Hamarneh’s efforts and work despite not being a member of his “Initiative” yet. Hejouj said that “Hamarneh is an extremely intelligent and a brave man and deserves our full support.”