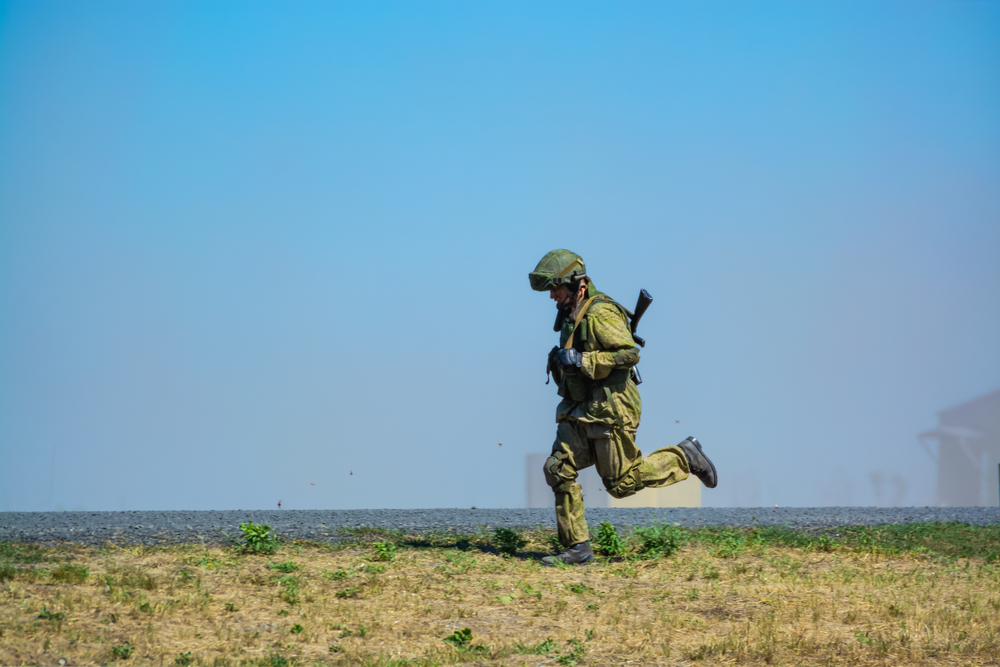 Putin faces an anti-war movement within the ranks of his own military.
By Alec Dubro | September 6, 2022

In early March, Vladimir Putin told French President Emmanuel Macron that his invasion of Ukraine was “going according to plan,” and that its goals would be “fulfilled.” He has never backtracked on that claim. In fact, he has only doubled down and has been forced to continue in a war—that he refuses to call a war—that has drained manpower and materiel in pursuit of an uncertain goal.

But if Putin stoutly maintains both the strategy and the outcome, increasing numbers of both soldiers and civilians beg to differ. The critics within the military are using a variety of tactics—from online campaigns to desertion—to make their voices heard.

And although Russia has tried very hard to hush up refuseniks in the army, news has leaked out.

Desertion and AWOLs are part of any war, and the Russia-Ukraine War is no different. It’s not surprising that Ukrainian troops are fleeing the incessant shelling and the often-chaotic organization on the front lines. It’s a bit harder to grasp when troops in the supposedly larger, better-equipped Russian army are fleeing in large numbers as well.

But that they are, although comprehensive numbers are difficult to come by. In fact, it’s difficult to determine just how many troops Russia has poured into Ukraine, and how that has changed since the April invasion. Just one example: In June, the New Voice of Ukraine posted a story that 200 Russian deserters were wandering the woods in a town near the city of Kharkiv. “They (the Russians) came back here—injured, covered with dirt, hungry, full of anger, with their equipment damaged,” an official with the Borova council wrote. Russia, however, has not acknowledged these desertions, though the Russian Duma has proposed harsher penalties for soldiers going AWOL.

There have been many instances like the deserters that showed up in Borova, with unknown numbers either refusing orders or quietly slipping away. In July, Radio Free Europe said, “Russian rights activists say hundreds, possibly thousands of troops are balking at orders to deploy, to keep fighting, or to remain on the battlefield without rotating out or home.”

It’s certainly understandable. Conscripts were usually not told where they were going, and though the terms of conscription said they wouldn’t be sent to the front lines, they often were. According to a U.S. Embassy report, “A Russian parliamentarian said one group of 100 conscripts was forced to sign contracts for military service and then sent to Ukraine into combat, according to the AP. Only four of them survived. The conscripts said commanders told them they were being sent for military training exercises only to discover they were going to combat zones inside Ukraine.”

Soldiers sent to Ukraine were promised a cakewalk. Instead, they were greeted by a determined and increasingly well-equipped Ukraine military. Rather than an easy victory, the Russians have experienced a high rate of injury and death: death estimates range from 1,500 (Russian figures) to 40,000 (Ukrainian figures), although no one is certain. The most likely number is 15-20,000.

Despite Moscow’s clampdown on the truth about the war—including any mention of war at all in the media—this isn’t 1955, and news slips out. One group who is infuriated by the news is the parents of soldiers, especially those who’ve lost touch with their sons. Many soldiers who’ve resisted orders are imprisoned, and parents have showed up to protest.

In April, “several parents of soldiers from Russia have made their way to Donbas to push for their sons’ release,” Deutsche Welle reports. “They traveled to the city of Brianka, where according to media reports, more than 200 such refuseniks are being kept in a camp. Parents have been holding a vigil outside, from morning to night. A Russian soldier who was jailed here told DW the camp is a former penal colony.”

But it gets worse: A recent memoir by a Russian paratrooper who fled the country revealed that troops were ransacking homes for something to eat and that many of them deliberately shot themselves in the leg to be sent home and collect $50,000 compensation. According to a review of the memoir in The Guardian: “Filatyev, who served in the 56th Guards air assault regiment based in Crimea, described how his exhausted and poorly quipped unit stormed into mainland Ukraine behind a hail of rocket fire in late February, with little in terms of concrete logistics or objectives, and no idea why the war was taking place at all. ‘It took me weeks to understand there was no war on Russian territory at all, and that we had just attacked Ukraine,’ he said.”

The Voices of Veterans

People often have little idea of how devastating mass desertions can be to an army. By 1968, groups of anti-war GIs—both conscripts and enlistees—were becoming more and more vocal in the U.S. military in Vietnam and stateside. Encouraged by an archipelago of GI coffee houses, they held Stop-the-War rallies, lobbied politicians, and published newspaper articles. Within several years, anti-war badges were common on the front lines and refusal to fight was an open secret. By the end of active U.S. combat in 1973, there had been 50,000 desertions. A touring exhibition spearheaded by U.S. activist Ron Carver called Waging Peace in Vietnam is introducing Americans—and Vietnamese—to this important movement.

Veterans groups from that era, meanwhile, have offered support to their Russian counterparts. Organized groups of U.S. veterans have been encouraging Russian troops to just say nyet. In April, David Cortright wrote in Waging Nonviolence:

Putin’s greatest vulnerability may be his dependence on the willingness of Russian soldiers to do his dirty work… Recently I joined with other former U.S. soldiers who opposed the Vietnam and Iraq Wars to issue an open letter urging Russian soldiers to “listen to your conscience.” The invasion of Ukraine is a violation of international law, our letter says, citing the International Court of Justice ruling against Russia.

But just like civilians during the Vietnam War, Russian civilians now are an important part of the resistance. Again, hard numbers are hard to come by, but despite a near news blackout and an attempt to shut down any opposition, thousands of Russian civilians are engaged in differing levels of resistance.

By early May, according to the Italian Institute for International Political Studies, “Public protests against the war, which occurred on a larger scale in the early days of the invasion, have resulted in over 15,000 people being detained across the country since February 24th, according to an OVD-info human rights watch group. Many of those detained have been beaten, psychologically and physically abused… “

However, in general, Russia favors exiling instead of imprisoning activists, and many thousands of Russians have just up and left. “The exiles include many people not directly involved in politics—technology specialists, entrepreneurs, designers, actors and financiers—countless professionals either directly engaged with the global economy or who just wanted to feel connected to the wider world,” writes Neil MacFarquhar in The New York Times.

The Future of Russian Resistance

These groups, military and civilian, are usually called refuseniks. But the truth is there’s a much larger segment of the population ready to revolt if Putin institutes a general draft. Like the United States in the Middle East, Russia is relying heavily on professional soldiers and supplementing that with volunteers and mercenaries, as well as pro-Russian Ukrainian militia.

But how long Russia can maintain its limited military campaign and how long the public will put up with a deadly, slogging war is anyone’s guess. According to Russian human rights lawyer Alexei Tabalov, though, “There have been leaks recently in the public media that Putin is allegedly preparing for a new major offensive in Ukraine in autumn and winter. However, he must have the resources to do so, especially human resources.”

There are three indications are that a serious offensive is in the works.

“Firstly, the authorities are preparing for mobilization,” Tabalov continues. “We can judge this from whispers and mutterings leaking from officials at various levels. Secondly, mass conscription of reservists for a military training camp for 1.5-2 months indicates this. This means that by November-December some thousands of more-or-less prepared fighters can be mobilized to the front. And thirdly, the regions and medical organizations have received orders for additional doctors and medical personnel to be sent to Ukraine on a voluntary and compulsory basis.”

Whether Putin’s determination is enough to carry the day is by no means clear. After all, Russia’s war in Afghanistan in the 1980s showed that just because they were losing and the public was fed up didn’t mean that the government or the military was ready to quit. But this is a new war and a new era, and perhaps the fed-up Russian soldier and the angry Russian citizen will have more influence over government policy.