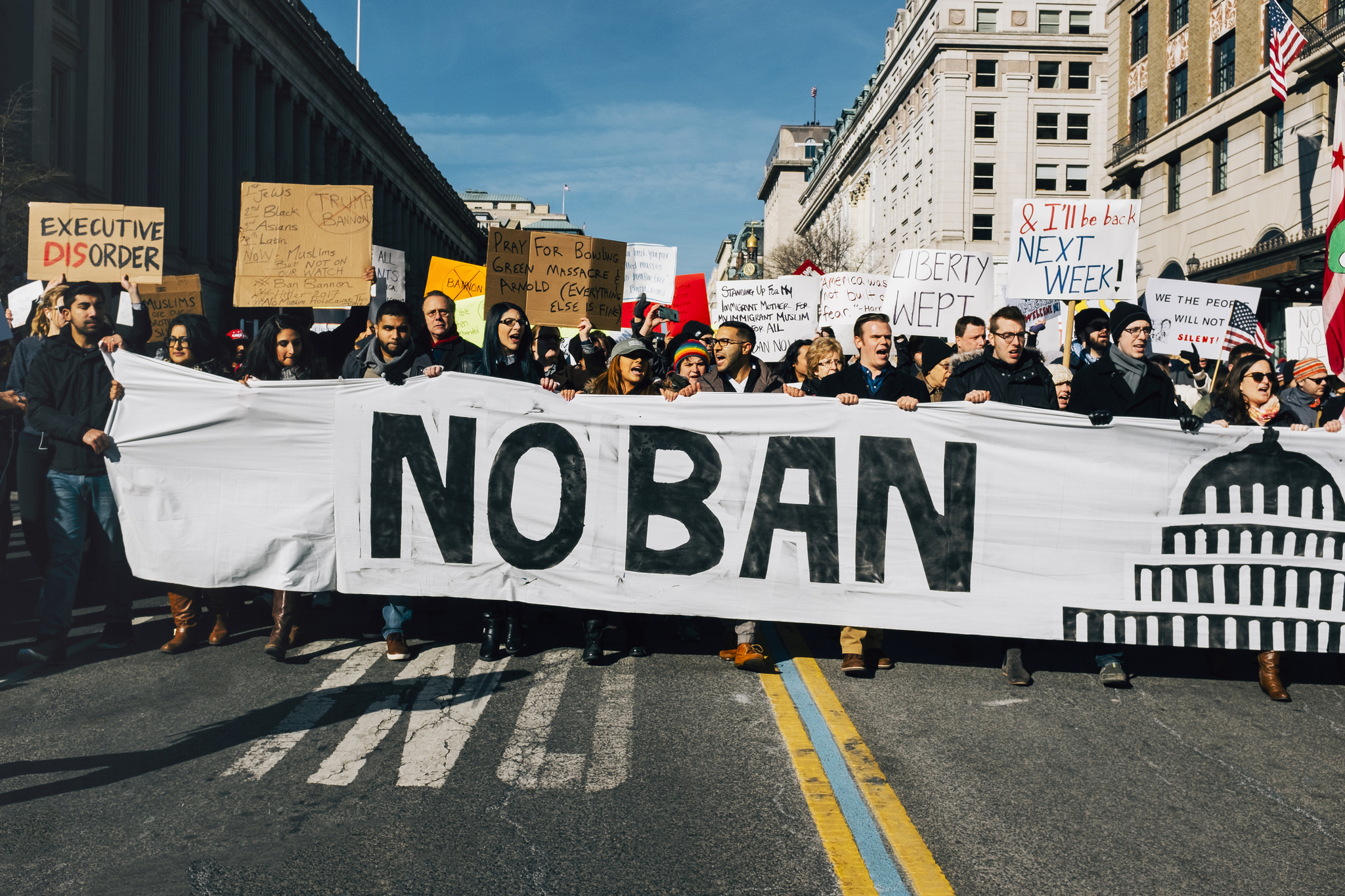 Keeping Up the Fight Against the Muslim Ban

A year after the Supreme Court ruling upholding it, advocates have lined up legislation and presidential candidates behind undoing one of Trump's signature abuses.
By Mina Shahinfar | July 26, 2019

This summer marked the one-year anniversary of the 5-4 Supreme Court ruling that upheld the Trump administration’s Muslim travel ban. The court narrowly ruled the administration’s arbitrary travel restrictions against citizens of Syria, Iran, Yemen, Libya, and Somalia, as well as against Venezuela and North Korea, constitutional.

A year later, President Trump attacked four progressive congresswomen, telling them to “go back and help fix the totally broken and crime infested places from which they came.” Three of the four were born in the U.S., and they’re all U.S. citizens. The one immigrant in the group — Rep. Ilhan Omar — is a refugee from Somalia, a country whose residents are now effectively banned from the United States.

Throughout his campaign and presidency, President Trump has tapped into racism, xenophobia, and Islamophobia, easily preying on people’s emotions and exploiting their fears to serve his own political interests. It’s a foundational part of his political appeal.

I’m an American, born and bred in Ohio, but I’m also the daughter of Iranian immigrants.

I was a senior in high school when Trump was elected. When I first heard about the ban, I was heartbroken for the people in the birthplace of my parents, and my own beloved second home. To me the Muslim ban was the culmination of Islamophobia in America as I’ve lived and experienced it — the taking of illogical measures of demonization and discrimination to ostensibly serve my security.

Over 135 million people are impacted by the Muslim ban, a plurality of them Iranian. As the most populous of the seven nations banned, Iran had the largest total number of legal entrants to the United States (310,182) between 2006 and 2015. Two thirds of those entrants arrived on temporary visas. Many families, like my own, have strong connections to the States, as America remains the top destination among Iranians for work, study, and long-term living.

To those affected, the ban represents a blatant disregard of their humanity and aspirations solely based on their religion and national origin. And travel restrictions go far beyond limiting tourism or business travel. Families are indefinitely separated, students are forced to change their educational and professional pursuits, patients are barred from receiving medical treatment for life-threatening illnesses, and whole countries’ economies continue to suffer.

The first version of the Muslim Ban happened right as my grandfather was in the process of obtaining citizenship. His citizenship application was delayed for no obvious reason for years. It took legal action through the Council on American Islamic Relations to get his case resolved last year. I even helped by grandfather write numerous letters to our Senator, Sherrod Brown (D-Ohio), asking for an explanation and demanding action.

Most tragically, a dear family friend who was receiving cancer treatment at the MD Anderson Cancer Center in Houston — and who had traveled overseas in the middle of treatment — was denied a visa to return and continue her treatment. She passed away in Qatar three months ago. Although medical waivers are supposed to be given in these situations, in practice the process is made extremely difficult for people to qualify. Some just give up, while others just run out of time. The State Department recently admitted that only 5 percent of travel waivers requested have been granted.

Proponents of the Muslim ban claim that it somehow enhances our security by keeping terrorists out. Yet people from those predominantly Muslim countries have killed precisely zero people in the United States in recent decades. The terrorists that took part in the 9/11 attacks came from several countries, none of which are included in the ban. Fifteen of the 19 came from Iran’s regional rival Saudi Arabia, yet the Trump administration has embraced the brutal Saudi monarchy more closely than ever.

Virtually nobody disputes the wisdom of background checks and basic scrutiny of visa applicants, but that’s already done anyway. It’s hard to comprehend how a grandfather coming here to live with his children, or a cancer patient in need of medical care, is a threat to anyone — unless the whole thing is about political posturing, not security. There should be no impediment to a chance at an improved life, a reunion with kin, or a visit with an American doctor.

Especially in our current global political moment, citizen to citizen exchanges are crucial to diplomacy and world peace. When governments don’t engage, or they ratchet up tensions as the Trump administration is currently doing with Iran, ordinary people can build relations and understanding with one another. Fair immigration and travel policies pave the road to understanding, humanizing all faiths and all individuals — an avenue cut off by our own government at a crucial time.

When the Muslim Ban was ruled constitutional, I was absolutely disappointed. I kept reminding myself: The court may have affirmed the administration’s right to impose the ban, but they didn’t say it was right. One year later, I’m even more motivated to work with my community to reverse this flawed policy.

Congress still has the power to repeal the ban by voting yes on S. 1917 and H.R. 4271, two bills that would declare the ban illegal and unconstitutional, and prevent taxpayer dollars from being used to implement it. Additionally, many Democratic presidential candidates have condemned Trump’s dehumanizing anti-immigrant policies.

At a recent forum in Pasadena, Kamala Harris, Bernie Sanders, Julian Castro, and Jay Inslee told advocates they would push immediate legislative and executive action to undo Trump’s anti-immigrant abuses, including the Muslim ban, if elected. Senator Elizabeth Warren and Cory Booker have also spoken on the chamber floor against Trump’s travel ban, sharing stories and fighting to repeal the executive order.

Our country has the capacity to right the wrong it has committed and has done so many times in history. We just have to do the legwork.

Mina Shahinfar is a Next Leader at the Institute for Policy Studies.