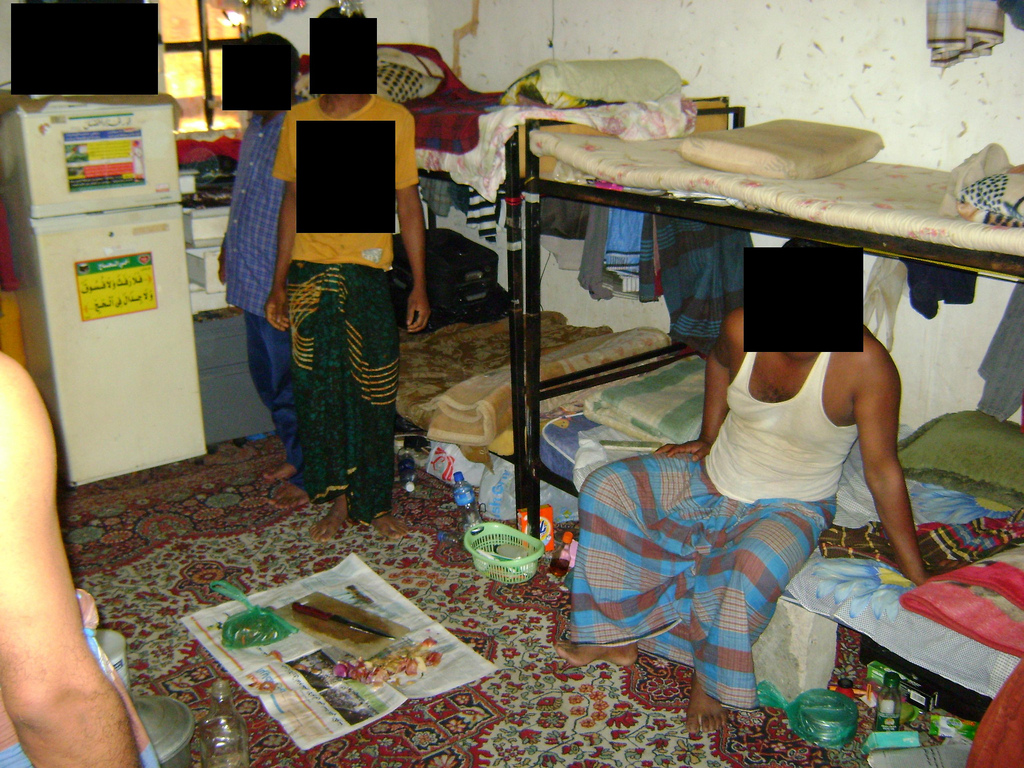 The plight of foreign laborers in the Gulf—who make up large majorities of the population in the smaller emirates—underscores a dark underside to the modern, glossy exterior the GCC states like to showcase to the world. (Photo: Rebel Against Injustice / Flickr)

In the smallest Gulf kingdoms, upwards of 90 percent of residents are immigrant laborers. Many face unspeakable abuse.
By Sam Badger, Giorgio Cafiero | September 12, 2014

Since FIFA picked Qatar to host the 2022 World Cup, the tiny and uber-rich Gulf emirate has increasingly come under scrutiny for its failure to protect the human rights of its burgeoning foreign workforce.

Qatar’s 1.8 million foreign workers—who vastly outnumber the country’s 300,000 native citizens—are frequently deprived of wages, trapped into permanent debt, exposed to hazardous working conditions, and denied the right to unionize. Approximately 1,000 foreign workers have died in Qatar since 2012, according to Qatar’s government. Independent human rights organizations claim that the figure is even higher.

Amid growing international calls to pull the Cup from Qatar, Emir Sheikh Tamim bin Hamad Al Thani has promised new reforms aimed at safeguarding workers’ rights. It remains to be seen whether he is serious.

The large-scale use of foreign labor is widespread throughout the monarchies of the Persian Gulf, where traditional royal elites, businesses, and private individuals have accrued high levels of wealth despite the region’s small domestic workforce. Bolstered by its natural gas exports, Qatar, for example, has the highest gross domestic product per capita of any country in the world. Through energy exports and financial services, the five other members of the Gulf Cooperation Council (GCC)—Bahrain, Kuwait, Oman, Saudi Arabia, and the United Arab Emirates—have also cultivated substantial financial reserves.

This wealth has enabled Gulf countries to invest heavily in massive new infrastructure works, but the region lacks a sufficient indigenous workforce to staff these projects. Additionally, many Gulf states provide robust social benefits for their native citizens, which decreases the incentive for natives to work in hazardous fields like construction.

Consequently, demand for migrant workers is substantial. The Gulf’s construction boom has been fueled by a massive influx of workers, primarily from Asia, who also take jobs in domestic work and other low-wage fields. These foreign laborers are driven to the Gulf by poor economic prospects in their home countries and the perception that a steady income can be earned easily in the Gulf. But many arrive to find a waking nightmare.

A key plank in the Gulf’s foreign labor apparatus is called the kafala, or “sponsorship,” system.

The system entails middlemen who travel to Southeast Asia and sell the right to work in the Gulf to prospective migrants. Once in debt to the middlemen, who “sponsor” the workers’ right to travel to the Gulf, the laborers are expected to pay off their debt to the sponsor by working long hours—often in the construction industry, where workers labor away in temperatures that can rise above 50 degrees Celsius, or 122 degrees Fahrenheit.

The physical toll on these workers is brutal. Between 2010 and 2012 alone, an estimated 700 Indian workers died in Qatar, and Nepali authorities say that hundreds of their own nationals have perished there as well. According to estimates by the International Trade Union Confederation (ITUC), without reforms to the region’s labor laws and proper enforcement, some 4,000 workers could die on construction projects related to the 2022 World Cup alone. The ITUC reports that workers are often denied access to water and shade, and that the shelter reserved for them is unsanitary and dehumanizing.

Yet because permission from their sponsor is required to seek a new employer, foreign laborers are often trapped in their jobs. This ensures that their paltry wages are used to pay off the debt incurred by their travel. Without citizenship or any political rights, and unable to exit the country—their passports are frequently seized by authorities upon arrival—these foreign workers are trapped in what can be only be described as virtual slavery or indentured servitude.

Foreign women employed as domestic workers for the GCC’s wealthy residents are particularly vulnerable to exploitation. Secluded in private homes and typically denied the right to leave, they’re often trapped with employers who withhold pay and subject them to appalling episodes of physical assault and sexual violence.

And there is not much they can do about it, as this April 2014 report from Amnesty International makes clear:

Women [in Qatar] who have been physically or sexually abused face major obstacles to getting justice. None of the women researchers spoke to had seen their attackers prosecuted or convicted. In one horrific case, a domestic worker broke both her legs and fractured her spine when she fell from a window as she tried to escape a rape attack by her employer. Her attacker then proceeded to sexually assault her as she lay on the ground, injured and unable to move. Only afterwards did he call an ambulance.

When researchers interviewed her six months after the attack, she was still using a wheelchair. Despite her appalling injuries, the Public Prosecutor dismissed the case due to “lack of evidence” and she returned to the Philippines last year. Her employer has never been held accountable.

While there have been some reforms for domestic workers put on the table by GCC leaders, the language has largely been vague and thus far inconsequential.

Recognizable patterns recur throughout the GCC.

A particularly egregious case was the beheading of Rizana Nafeek, a 24-year old Sri Lankan woman working as a maid in Dawadmi, in January 2013. She was charged with strangling the four-month old baby of her employer to death. Evidence against Nafeek was limited to a “confession” that she signed following her arrest, which Nafeek said was coerced and undertaken without the assistance of a translator. Complicating matters, Nafeek’s family said she had lied about her age on her passport application, meaning that in 2005—the year of the alleged offense—she was only 17, and thus a minor under standards set by international law. She was tried without legal representation and subsequently executed over the fervent protests of the Sri Lankan government.

The UAE, where guest workers outnumber citizens nearly 8 to 1, has been taken to task for deporting workers who strike, housing workers in poor conditions, and stealing the passports of employees. Like FIFA’s embarrassment over the World Cup in Qatar, Western artistic, academic, and cultural institutions who have established operations in the UAE have been repeatedly embarrassed by the small emirate’s treatment of its workers.

New York University (NYU), for example, has faced a public relations nightmare over the construction of a satellite campus in Abu Dhabi. Although the university’s officials issued a “statement of labor values” after deciding to build the campus in 2009, the New York Times reported last May that workers on the NYU campus, who were employed by the BK Gulf Corporation, were paid as little as $272 per month, which doesn’t go far in a country famous for its opulence. The paper reported that up to 15 workers were forced to share rooms scarcely bigger than 200 square feet. Eventually, the workers launched a strike which, on its second day, was met by a violent police crackdown. Hundreds were subsequently deported.

Similar problems have been reported in oil-rich Kuwait, where 2 million expatriate workers live next to 1.8 million natives, as well as Bahrain, where guest workers face the additional challenge of navigating political tensions since the failed uprising of 2011, when Shi’ite-led protests against Bahrain’s ruling monarchy were quashed by troops from Saudi Arabia and other GCC countries.

In response to widespread criticism over its World Cup preparations, Qatar’s government has promised several reforms for guest workers, including changes in the kafala system that would enable foreign workers to exit the country or change jobs with less difficulty.

However, the ITUC and others are highly skeptical about what, if anything, the reforms will achieve. An ITUC spokesperson stated that foreign workers in Qatar still have “no freedom of association, no minimum wage, and no effective labor compliance system. None of the laws seem to apply to domestic workers.” Moreover, migrant workers will still require exit visas to leave the country, giving the state the authority to decide if and when the workers can return to their countries of origin. That means that nearly 1.8 of Qatar’s 2.1 million residents are trapped there, with virtually no legal protection, at the state’s discretion.

Unfortunately, while such staggering figures highlight an imperative for reform, many human rights observers are pessimistic. The Qatari economy has become massively dependent on foreign workers, especially for construction. Without these workers, the Qatari “miracle” of breakneck urbanization, sky-high average incomes, and rapid modernization would have been impossible. As the number of migrant workers grows, the cost of providing them with even basic labor protections will only rise, further increasing the economic costs of real reform.

But if Gulf leaders prove indifferent to pressure from global civil society, economic factors might move them to act. As the GCC makes an economic pivot toward Asia, demands from source countries could force them to improve conditions for migrant laborers.

For example, earlier this year, Saudi Arabia and Indonesia inked an agreement to grant Indonesian workers in the kingdom greater rights, including the right to keep their passports, communicate with family members, get paid on a monthly basis, and have time off. This agreement followed Indonesia’s August 2011 ban on sending migrant workers to Saudi Arabia, where reports of horrific abuse of Indonesian workers had circulated for years. While Human Rights Watch assessed that these new regulations amounted only to “slow moves in the right direction,” the pressure from Jakarta underscored the leverage that Asian governments can wield over the GCC states that rely on their migrant laborers.

But change won’t come easily. Only a few months ago, GCC states unanimously refused to endorse a protocol by the International Labor Organization (ILO) for the improvement of labor standards.

The plight of foreign laborers in the Gulf underscores a dark underside to the modern, glossy exterior the GCC states like to showcase to the world. In the absence of a powerful labor movement in the Gulf, the GCC’s millions of suffering foreign laborers will have to hope that their home countries can protect them abroad, even if they couldn’t provide jobs at home.