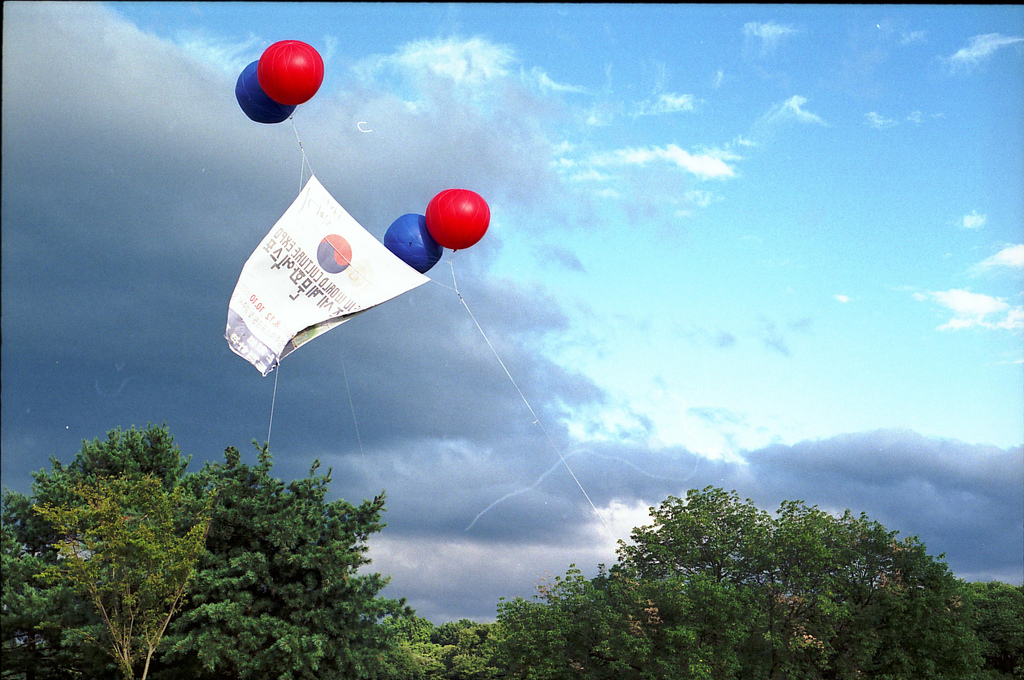 South Korean activists are using balloons to send political and religious propaganda across the DMZ. They're also endangering Koreans on both sides of the border.
By John Feffer | November 3, 2014

Korean human rights activists send all sorts of things by balloon across the border into North Korea.

The winds propel thumb drives containing movies, anti-government leaflets, dollar bills, even ChocoPies. One evangelical Christian group boasts that it has sent across 50,000 New Testaments and 500,000 Christian flyers. Freedom Fighters of North Korea (FFNK) claims to have delivered 52 million leaflets, more than enough for every North Korean citizen to have one of their own.

The balloon deliveries are not cheap—FFNK spends at least $500 per balloon. And despite the sheer volume of these airmail deliveries, it’s not clear whether very much of the contraband makes it into the hands of the intended recipients.

The South Korean government is ambivalent about these efforts to send information covertly into the North. In 2013, police broke up one attempt at Imjingak to send over gas-filled balloons outfitted with 200,000 leaflets. But the government hasn’t invoked all the laws that it could to prevent the launches. The Park Geun-hye administration wants to keep open lines of engagement with North Korea, but it also doesn’t want to appear unresponsive to human rights issues or overly aggressive toward its anti-DPRK constituency.

Nevertheless, the leaders of both the ruling party and the opposition party have shown rare bipartisan agreement in arguing that the balloon launches represent an unnecessary provocation. The ruling Saenuri Party, however, has also cautioned that it’s not the government’s role to intervene and stop the activists.

Korean politicians are right: the balloon barrage against North Korea is an unnecessary provocation. Even if they don’t spark an all-out war, as North Korea has threatened, the incidents pose a threat in at least four separate ways.

The first threat is to North Koreans. The balloons might land on the roof of a farmer’s dwelling, leading the North Korean authorities to drag in the unwitting fellow on the suspicion that he stowed it there on purpose. Or perhaps a young child picks up the balloon and innocently brings it home only to get the entire family in trouble.

The balloon activists are well aware of these dangers. Distribution of banned material “via land couriers is highly dangerous and the liability for those caught doing so often results in death or forced labor,” the organization Seoul USA says on its website, “and it’s even worse for those carrying Christian literature like tracts or Bibles. So we launch large hydrogen balloons into North Korea carrying the Christian message.” Needless to say, North Koreans face similar punishments for carrying around such literature. By deliberately putting North Koreans in danger, these Christian activists demonstrate that they are more interested in saving souls than saving lives, or perhaps they believe that martyrdom would spread their message even more effectively.

The second threat is to South Koreans living near the border. They’re the ones who will suffer if North Korea fires from its artillery positions. It’s no surprise then that the residents of Paju tried to prevent the most recent launch on October 25 by using 19 tractors to block the way of the balloon activists.

The third threat is to inter-Korean dialogue. Even if the balloons don’t result in actual conflict, they threaten to extinguish the faint embers of cooperation between North and South Korea. Consider, for instance, the Kaesong Industrial Zone, the only surviving project from the “sunshine” days, which provides concrete economic benefits to the 50,000 North Koreans who work there. The pay and working conditions are better than what they would find in virtually any other North Korean factory.

Is Kaesong a perfect arrangement? Of course not. But it serves as the foundation for greater cooperation that could raise the living standards for many more people in the North. And the interactions at Kaesong provide an important glimpse into South Korean life that doesn’t come with the risk of severe penalties. It’s not inconceivable that the Park Geun-hye administration could, with its trustpolitik, create a range of similar cooperative projects with the North. But the balloon activists are just as eager to destroy such collaboration as they are impatient to see the end of North Korea.

The fourth threat is to South Korean democracy. It is embarrassing, to say the least, for the South Korean government to crack down on what seems, on the face of it, to be free expression. South Korea unshackled itself from authoritarianism in the 1980s, and it did so with the help of outside supporters. So why on earth should it turn around and deny the same thing to North Koreans? The balloon activists make South Korea look like a hypocritical country, which is of course what they want to do.

The difference, of course, is that there is no one inside North Korea asking for help in bringing down the regime in Pyongyang. Based on what we know from defectors, many if not most North Koreans have little love for their current leaders. And they certainly enjoy South Korean TV shows and ChocoPies, which they get from a variety of different methods without having to wait for a balloon to drop near them. But there is neither a mass movement nor even an elite group of dissidents—that we know of, anyway—preparing for some kind of Pyongyang Spring.

The balloon activists are making maximalist claims for their smuggled information and refusing to compromise in order to achieve their goals. I understand their visceral dislike of North Korea, particularly the activists who have left that country. But they would do well to heed the experience of Polish activists from the 1980s who pursued a “self-limiting revolution.” Those Poles knew that if they pushed their own government too hard, the consequences—in the form of a Soviet invasion—would be catastrophic. So they tread very carefully in 1988-89.

The balloon activists should similarly consider the unintended consequences of their actions and impose a limit on their activities. Their balloons potentially endanger the lives of people on both sides of the border, put the delicate negotiations between Pyongyang and Seoul at risk, and challenge the very democratic legitimacy of the South Korean government. For these reasons, the activists should take the air out of their own balloons and not force South Korean citizens or the South Korean government to do it for them.