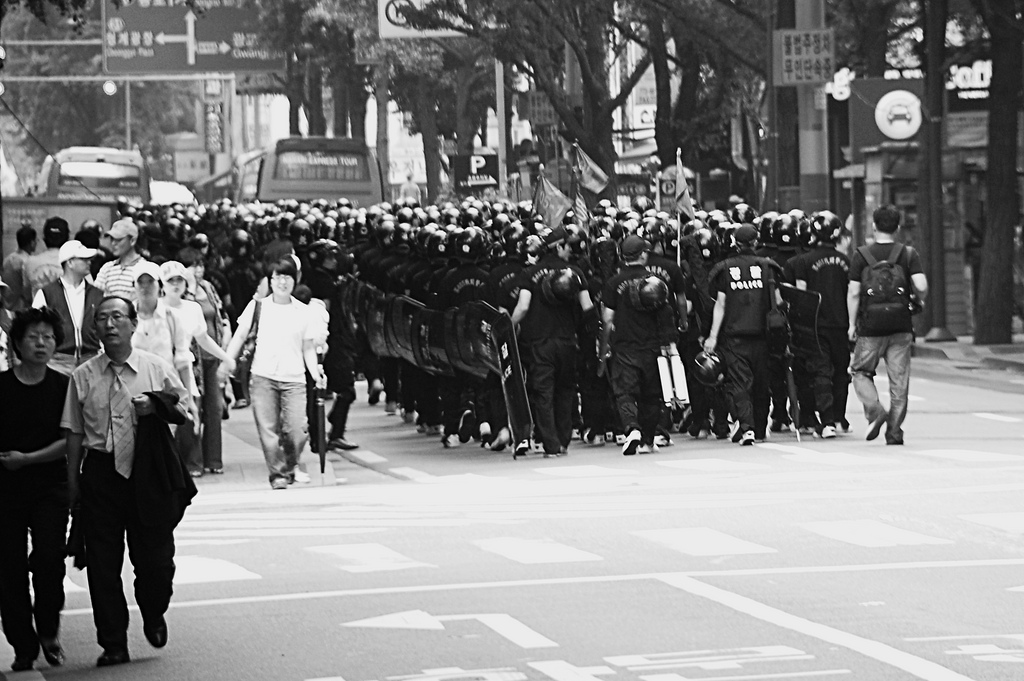 They’re the last three hunger strikers standing. Actually, they’re sitting—just outside the National Assembly in Seoul, South Korea. The weather is turning cold, and they’re bundled up against the wind.

The three men are legislators. Two of their number have already collapsed and ended up in hospital. In November, the government attempted to ban their political party—the United Progressive Party, the third largest in the country—for essentially being a proxy for North Korea. The party leader, meanwhile, is on trial for treason under South Korea’s National Security Law.

This is not the only political spectacle in town. At the same time, the government’s National Intelligence Service (NIS) stands accused of intervening in last year’s presidential election on the side of the ruling party’s candidate, Park Geun Hye, the daughter of one-time South Korean dictator Park Chung Hee. She won the election with a little over 51 percent of the vote, giving the conservatives another five years of presidential power. Initially, President Park dismissed reports of the NIS sending out a couple dozen insinuating tweets about her rival candidate by suggesting that such a minor infraction could not possibly have influenced the election one way of another. But late last month it was revealed that this initial tweet estimate was a major underestimate.  The NIS apparently sent out 1.2 million tweets, and the Cyber Command responsible for dealing with North Korea added another 23 million.

South Korea is a democracy, a thriving one if measured by the sheer size and energy of its civil society and the stability of its political institutions. It’s not on a return trip to its dictatorial past or on a path of convergence with its dictatorial neighbor up north. The hunger strikers in front of the parliament are, alas, not themselves exemplars of democracy. Their party is not united, and the UPP is frankly an embarrassment to many if not most progressives in the country. It’s also quite small. Being the third-largest political party in a country dominated by the ruling Saenuri Party and the opposition Democratic Party translates, after a post-election fission, into a mere six representatives.

But what is happening in South Korea today is deeply disturbing nonetheless. Last year, Amnesty International published a report on how the government is using the longstanding but dangerously obscure National Security Law to restrict freedom of speech, prosecute critics of the government, and limit the right to organize associations. “The number of new NSL cases increased by 95.6 per cent—from 46 in 2008 to 90 in 2011—between 2008 and 2011,” the report notes. “The number of those charged under the vaguely worded clauses of the NSL rose by 96.8 per cent—from 32 in 2008 to 63 in 2011—in the same four year period.” These cases range from disturbing to downright ludicrous. In the latter category is the case of Park Jeong-geun, who sent around tweets and photos satirizing North Korea. He should have known that intelligence agencies are notoriously deaf to irony. He was sentenced to 10 months in prison for “praising” the object of his derision. The South Korean government has gone after the Capitalism Research Society (an academic organization that looks at alternative economic models), People’s Solidarity for Participatory Democracy (a huge civil society organization that publicly questioned the government’s official report on the 2010 sinking of the Cheonan vessel), and the Socialist Workers League (an organization that, ironically, is highly critical of North Korean-style socialism).

It gets worse. As Foreign Policy In Focus (FPIF) contributor Geoffrey Fatig writes in South Korea’s Free Speech Problem, “In 2011, the country’s press freedom ranking was downgraded by the human rights organization Freedom House from ‘Free’ to ‘Partly Free’ as a result of ‘increasing official censorship, particularly of online content, as well as the government’s attempt to influence media outlets’ news and information content.’”

The effort to silence the United Progressive Party is the latest in this series of crackdowns. On a recent visit to South Korea, I visited the National Assembly to interview the three hunger strikers. They complained about the McCarthyite atmosphere in South Korea (a legitimate concern). They argued that Park Geun Hye was engaged in political retaliation against UPP leader Lee Jung-hee for calling her the daughter of pro-Japanese dictator (which is true, but not especially relevant, especially for a president who has refused to meet her Japanese counterpart as per recent custom). They also believe that the new president wants to establish a long-term dictatorship just like her father’s (it makes for a catchy slogan, but it’s off-base, Park Geun Hye’s authoritarian tendencies notwithstanding).

The key question, however, remains North Korea. “The accusation of being pro-North is typical of the old way of Korean political history,” Kim Sun Dong, one of the UPP hunger strikers, told me. “The party is not following North Korea. We just want a peaceful way: to cooperate with North Korea and solve the problem of the Korean peninsula division peacefully.”

On the face of it, this statement is true. The party has been careful to distance itself publicly from North Korea—and its own past. The UPP was an attempt to join together two different political factions that long disagreed about North Korea. What remains in the party after a vote-rigging scandal that emerged after last year’s election—which prompted the progressive newspaper Hankyoreh to lament that there is no future for progressive politics “under the current UPP system”—is the faction that once embraced North Korea’s juche philosophy. A South Korean friend of mine, a leftist involved in North-South dialogue for the last two decades, confirmed that the UPP’s protestations of independence ring hollow.

It’s hard to imagine that anybody in South Korea these days would have much sympathy for the North Korean system. Pyongyang has directed several attacks on the South, repeatedly threatened to turn Seoul into a “sea of fire,” and presided over a dynastic dictatorship that engages in human rights violations of considerable magnitude (for a glimpse of the violations involving the disabled, see FPIF contributor Janet Lord’s Nothing to Celebrate). What is most disturbing about the political activities of UPP members—chronicled in this South Korean analysis—is the negative light they cast on the sincere efforts of so many other groups to support a principled engagement with North Korea that very carefully rejects endorsement of the system.

So, the UPP is not exactly a group of Andrei Sakharovs. But the Park government has made a serious mistake in trying to ban the party. Practically speaking, this is a small party with very little political influence. It split in two shortly after the last elections. If ignored, it would probably split again and become completely irrelevant.

Philosophically, the ban is based on a belief that the party’s formal declarations belie its secret beliefs. This kind of political intervention indeed amounts to a witch-hunt, for how can any party or politician prove beyond a doubt that their secret intentions are pure? Perhaps the UPP has truly distanced itself from its past. Democracy is about the benefit of the doubt. Moreover, even though it has proven to be an unusually fractious party—Kim Sun Dong once threw a canister of tear gas inside the parliament during a debate on trade—the UPP has taken the political route. Unless it can be proven otherwise on the basis of specific acts, the UPP should be treated like Sinn Fein.

The real danger is when the government, with the help of the NSL, widens the scope of crackdown beyond groupuscules like the UPP. Suddenly anyone who has advocated engagement with North Korea—economic, diplomatic, humanitarian—becomes suspect. That’s why it’s necessary to hold one’s nose about the UPP’s past and defend its existence.

For a time, during the engagement policies of Kim Dae Jung and Roh Moo Hyun, it seemed as though the National Security Law would gradually wither away. The suspicion of being pro-North became less and less politically effective in an environment in which Seoul was concluding deals with Pyongyang. But two successive conservative governments in South Korea have steered policy in a different direction.

Park Geun-Hye has pledged a new trustpolitik approach to the North. She should take a similar stance toward her domestic critics. She has the conservative credentials to abolish or at least substantially modify the National Security Law without being accused of being a closet leftist. It’s time for her to make her mark on history and truly distance herself from her father’s legacy. Negotiating with North Korea would help end the Cold War on the Korean peninsula. Dismantling the NSL would help end the Cold War at home.