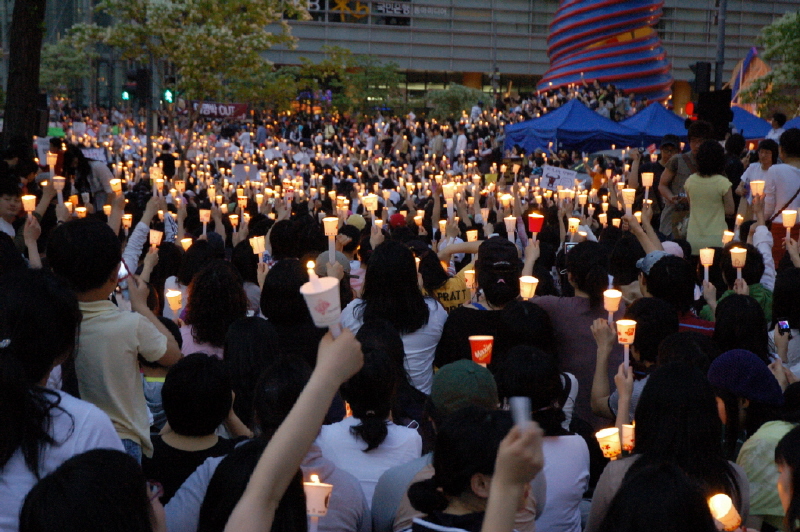 Young people have been pushed to the margins in South Korea -- can they transform the country's political system?
By John Feffer | May 9, 2016

The street protests of the Arab Spring happened largely because of disgruntled youth. The unemployment rate for young people in the Middle East and North Africa verged on the catastrophic in 2012: 42 percent for Tunisia and 38 percent for Egypt. Moreover, the rates had shot up significantly since 2010, so it seemed as though the already intolerable conditions were only getting worse. Young people came together through social media and took over the public spaces, demanding change.

Street protests throughout the southern tier of Europe – in Greece, in Spain – were also fueled by unemployed youth. In Greece, the unemployment rate for young people peaked at 60 percent in 2013, a time of huge popular unrest. The Spanish rate hit a high of 55 percent in July 2013, also a time of mass protests.

In the United States, the unemployment rate has been steadily falling for the last eight years. For young people, the rate has recently hovered around 10 percent. But young Americans face other problems. Many of the entry-level jobs they get barely provide enough to cover food and rent – much less the enormous college loans they have to pay back.

These dismal prospects are why so many young people are supporting Democrat Bernie Sanders in the race for president. More people under the age of 30 are supporting Sanders than Hillary Clinton and Donald Trump combined. Sanders envisions a new economic order in the United States that provides opportunities to all young people (and not just rich bankers and CEOs).

In South Korea, the youth unemployment rate is nowhere near the levels of the Middle East or southern Europe. But at approximately 12 percent, the jobless rate has Korean millennials deeply worried. One reason is that the official rate obscures how few young Koreans actually have jobs: less than half.

One of the social media memes, “Hell Chosun,” reflects the despair of the younger generation. It’s hard to get a job. The jobs they can get are not very good ones. And those not-very-good jobs are not even secure.

It used to be that hard-working young people called themselves the “three-give-up generation.” To get ahead, they had to sacrifice love, marriage, and children. Now they have become the “seven-give-up generation” and look forward to a future without those first three essentials along with human relations, home ownership, personal dreams, and hope. No wonder they look into the future and see only hell.

Some analysts have identified the youth vote as pivotal in the recent parliamentary elections in South Korea. Last month the ruling party suffered a major setback, the main opposition party picked up some ground, and Ahn Cheol-soo’s breakaway People’s Party emerged as a viable third force. Ahn, in particular, would like to attract the attention of young people as the “Bernie Sanders of Korea.”

Of course, Ahn’s agenda is a great deal more entrepreneurial than the egalitarian Sanders. “Young people need real opportunities for entrepreneurship,” Ahn told Emanuel Pastreich at Huffington Post. “Entrepreneurship does not only refer to starting a new business. There are many forms of entrepreneurship whereby young people can come up with and implement innovative ideas within a company,”

Many Korean young people feel stuck. They’re unhappy that the existing system is not making room for them. Aging baby boomers are not retiring. Because of traditional deference to those who are older, it’s difficult for young people to get ahead in politics, academia, or chaebols. Only in entertainment and sports can young people achieve rapid success, but those are highly competitive fields with only limited slots available.

Some young people will drift toward street protests. Others will simply go overseas. The level of unemployment and the degree of frustration are not likely high enough, however, to provoke Korean millennials to lead a revolution. The models provided by Egypt and Greece are not particularly inspiring, in any case.

Korea’s brand used to be “dynamic.” The country changes rapidly from year to year – in technology, culture, attitudes. A few years ago, another slogan appeared, “Korea, sparkling,” which suggests that the country isn’t so much changing as standing in one place and giving off light. There is no longer a sense of forward movement. Rapprochement with North Korea has stalled. Relations with China and Japan are stagnant. The current president represents an older era of politicians. The more things change, Koreans are realizing, the more they stay the same.

The leaderships in Beijing and Tokyo have chosen a “national revival” strategy of engaging young people. To build a strong China or to rebuild a strong Japan are the visions of Xi Jinping and Shinzo Abe. Involving young Koreans in something comparable would be an easy platform for the next aspirant to the Blue House.

But I think South Korea can offer its young people something better than watery nationalism. They should have a chance to be part of something brand new that they create themselves. Korean millennials could be the generation that transcends national borders.

Of all the things that the seven-give-up generation has given up, the most poignant one is hope. But what would it be like to be the generation that finally puts to rest the ghosts of the 20th century? To work toward stopping climate change? To successfully integrate North Korea into the international community? To create a peaceful and prosperous East Asian community with their counterparts overseas? That would be an incredibly energizing experience to be part of.

But that kind of program requires visionary leadership. Perhaps someone in the seven-give-up generation, someone who hasn’t yet given up hope, will provide that leadership.