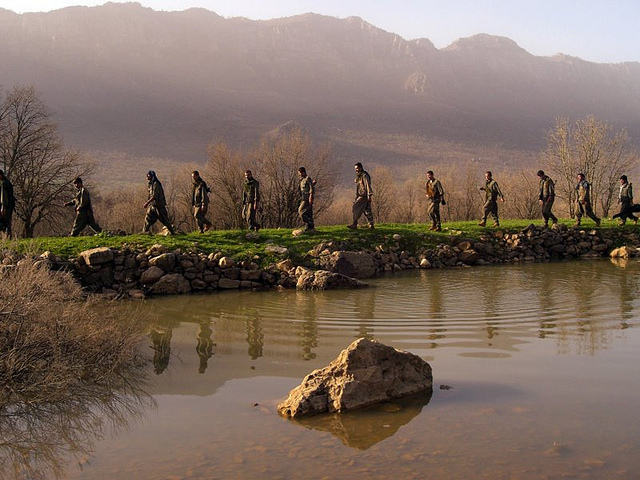 In Kurdish Syria, a Different War

On August 15, a car bomb ripped through a Beirut suburb, killing 21 people. The explosion was but the latest in a wave of attacks across Lebanon throughout 2012 and 2013 that were linked to events inside Syria.

The ease with which violence in Iraq and Syria has negatively impacted surrounding countries underscores the declining significance of borders throughout the Levant. Sectarian and ethnic identities, rather than citizenship, are proving increasingly influential in shaping the political orientation of communities throughout the region. From Beirut to Baghdad, conservative Sunni Islamists wish to rid the Arab world of Iranian influence, weaken Hezbollah’s position, and restore Sunni rule to Iraq and Syria. Naturally, the Levant’s Shia and Alawite communities are unified in opposition to this agenda.

Amid these deepening regional divisions, a new opening has emerged for one of the Middle East’s longest-suffering minority groups: the Kurds.

The shifting regional balance of power has enabled the Kurds to exercise greater control over their destiny. While the future is unpredictable, it is entirely plausible that Syria’s Kurds will maintain autonomy in northeastern Syria when the dust eventually settles.

However, the ongoing war between jihadist and Kurdish militias over control of northern Syria—a conflict far less well known than the battle between Assad and the rest of the Syrian rebels—will likely lead to a major humanitarian catastrophe for Syria’s Kurds before any political gains can be consolidated.

After the Syrian crisis erupted, the Kurds—who comprise 9 percent of Syria’s population—were faced with a challenging dilemma. Both joining revolutionary forces and allying with the regime posed grave risks given the conflict’s unpredictable nature. While some pundits have claimed that the Kurds ultimately sided with the regime, this assessment oversimplifies a complicated picture.

Syria’s “Kurdish Spring” preceded the Arab Spring and began in 2004, when anti-Assad Kurds were massacred in Qamishli for protesting against an Arab nationalist regime that had for decades dispossessed Kurdish farmers, confiscated Kurdish land, and outlawed the teaching of the Kurdish language. Yet the Kurds’ grievances against the Assad regime failed to yield an alliance between the Free Syrian Army (FSA) and the Kurdish minority. The FSA’s relationship with Turkey, combined with the Islamist and Arab nationalist identities of influential rebel factions, prompted many Kurds to fear a Muslim Brotherhood-led overthrow of the Ba’athist regime.

In July 2012, under pressure from a growing insurrection in the rest of the country, the Syrian government withdrew most of its security forces from the Kurdish-majority areas, leaving the Kurdish Democratic Union Party (PYD) as the de facto regional government. Assad’s withdrawal was driven by three strategic calculations. First, the Syrian military sought to consolidate its resources toward the battles in Damascus and Aleppo. Second, given Turkey’s support for the FSA, Assad wanted to deliver Ankara a tit-for-tat response to Turkish support for the Syrian rebels. Given that the PYD is affiliated with the Kurdistan Workers’ Party (PKK), which waged attacks against the Turkish state from Syrian soil under the later years of Hafez Al-Assad’s rule, the Ba’athist regime sent a clear message to Ankara by offering a PKK-affiliate group a safe haven on Turkey’s doorstep. Third, Damascus sought to further divide the opposition by seeking to enhance the allegiance of some Kurdish factions to the Ba’athist regime.

Since then there has essentially been a truce between the Syrian military and the PYD. Instead, throughout 2013, the PYD has been the target of ongoing attacks from Salafi jihadists determined to overthrow the Assad regime and deny the politically secular Kurds any spoils of the conflict. As the battles between the PYD and al-Qaeda-affiliated militias intensify, ethnic lines are increasingly being blurred, and a power vacuum has indeed developed.

Throughout the first week of August, the al-Qaeda-affiliated Jabhat Al-Nusra reportedly killed 450 Kurdish civilians in the border town of Tal Abyad. Other jihadists, meanwhile, shelled the Kurdish town of Ras Al-Ayn. The FSA has also waged attacks against the PYD on the grounds that the Kurdish militia is loyal to Assad’s regime. However, some Arab groups in Syrian Kurdistan have offered up their full support for the PYD, for fear that Islamist extremists may be gaining control over the territory. The brewing Islamist-Kurdish war in northeastern Syria pressured 35,000 Syrian refugees to flee to Iraqi Kurdistan in mid-August. Shortly thereafter, Masoud Barzani—leader of Iraq’s Kurdistan Regional Government (KRG)—declared that the KRG was “prepared to defend” Syria’s Kurds.

While many analysts doubt that the KRG’s well-trained peshmerga fighters would enter Syria to fight on behalf of the PYD, the KRG’s military training and financial support for the PYD underscores Barzani’s greater pan-Kurdish policies. Barzani’s likely motivation stems from his suspicion that a future war between central Iraq and the KRG could occur, and under such circumstances Syrian Kurdistan could provide strategic depth. In the meantime, the PYD’s posture vis-à-vis the jihadist fighters is strengthened by the strategic depth provided by Iraqi Kurdistan. If violence continues to plague Syria’s northeast, the border between Syrian and Iraqi Kurdistan may ultimately dissolve.

While most Syrian Kurds are Sunni Muslims, their staunchly secular politics pit them against the al-Qaeda affiliated groups seeking the creation of an Islamic emirate in Syria. Ethnic concerns, including the rebels’ apparent hostility to Kurdish self-determination, exacerbate the division. Reports of al-Qaeda fighters beheading Kurds and issuing calls for their extermination will only further expand the PYD’s support base from secular Kurds.

As the majority of Syria’s oil and gas reserves exist in northeastern Syria, the stakes are high for both sides. The geopolitical ramifications of an established autonomous Kurdish region—or independent Kurdish state—in northeastern Syria are complicated. From Turkey’s vantage point, a PKK-run Syrian Kurdistan would constitute a major setback given the likelihood that the PKK would utilize the territory to launch attacks against the Turkish state (especially if the ongoing Turkey-PKK peace talks fail and the ruling leaders in Damascus and Ankara remain in power for the near to medium term). Turkish officials are naturally concerned about the prospects of Turkey’s own Kurdish minority demanding greater autonomy from Ankara after being inspired by their Kurdish counterparts in Syria. That said, after the Gulf War, Turkey feared a semi-autonomous Kurdish state in northern Iraq, yet the KRG eventually became one of Turkey’s closest Middle Eastern allies.

For Turkey to form a similar alliance with any semi-autonomous Kurdish state in Syria, the ongoing peace talks with the PKK would need to succeed (an unlikely prospect in the near term), or a pro-Turkish rival of the PKK would need to assume power in northeastern Syria (also an unlikely outcome given that the PYD is more heavily armed than its Kurdish rivals). For the time being, Ankara has supported jihadist militias in northern Syria not only to weaken the Assad regime, but also to weaken the PKK/PYD. However, Turkey is playing a dangerous game, as the establishment of a PKK/PYD-run Kurdish state along its border may prove to be less hostile than an al-Qaeda-run Islamic emirate on the other side of the border. For now, Turkey has hedged its bets.

The ongoing battle between Kurdish forces and al-Qaeda’s Syria-based branches poses a difficult challenge for the United States. Wary of alienating its NATO ally Turkey, Washington has vested interests in the Syrian state’s survival in a post-Assad era, and thus opposes a semi-autonomous or independent Kurdish state in northeastern Syria. However, the United States also has no interest in al-Qaeda affiliate groups maintaining control of a strip of land on NATO’s Middle Eastern doorstep.

Washington could certainly benefit from gaining additional allies in the region. Given the pro-American orientation of Barzani’s KRG, the Obama administration would be wise to establish ties with Syria’s Kurds, given that the tide may continue to turn in the Kurds’ direction over the long-term. If Western states decide to provide the Islamist rebels with more advanced weaponry that ends up being used against the PYD, this could sour Washington’s relationship with an autonomous Syrian Kurdistan in the future. There is little evidence that this has been considered by the Western countries arming the rebels.

Like their Iraqi counterparts, Syria’s Kurds have sought to break free amid their country’s chaos and violence. From their perspective, an independent Kurdish state was promised, but not delivered, by the powers that won World War I. Almost a century later, they smell a genuine opportunity for greater autonomy, and possibly independence. For generations, the Kurds’ alliances have fluctuated given the region’s fluid geopolitical developments and their need to play off their host governments’ evolving tensions.

For now, Syria’s Kurds are enduring a little-reported humanitarian crisis amid grave human rights abuses from al-Qaeda after decades of tyranny under the Assad government. In the longer term, the Kurds may ultimately achieve their dream of greater autonomy or independence. If so, the “Arab Spring” may be remembered more accurately as the Kurdish Spring.