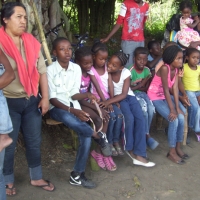 Just over a year after the implementation of a new free trade agreement with the United States, Colombia’s sugarcane cutters continue to face widespread labor rights violations.
By Adam Schaffer | August 5, 2013

On Wednesday, July 10, a district court in Buga, Colombia, absolved six labor leaders of “conspiracy to commit a crime.” The accused—four sugar cane cutters and two Colombian Senate staffers—were originally charged for attending a 2008 meeting where it was alleged that the Revolutionary Armed Forces of Colombia (Fuerzas Armadas Revolucionarias de Colombia, FARC) were present (WOLA was also at the meeting, and can attest that it was a meeting about labor rights violations, and no FARC members were in attendance). The labor leaders, the prosecution alleged, were conspiring to commit a violent act.

Their acquittal is little short of historic; in a country where union organizing has often been equated with terrorism and union leaders are regularly declared “military objectives,” the court’s decision that the meeting was part of a legitimate, legal struggle for labor rights is a major step.

Yet while the case is encouraging, it is hardly emblematic of Colombia’s broader labor rights situation. A year into a new Free Trade Agreement (FTA) with the United States, labor rights violations continue to be the norm in Colombia.

A more typical case is that of the San Carlos sugar mill.  On April 16, 2009, Daniel Borja and Alexander Carrillo showed up at work at the sugar mill near Cali, Colombia. Greeted by armed men, they were informed that the mill was under new management, and they and some 200 other workers would be let go. Faced with effectively mandatory resignation papers, the workers had two choices, explained officials from Human Transition Management (HTM), the consulting firm executing the mass firing: sign or sign.

Since the firing, Carrillo and Borja have formed a collective to demand the workers’ reinstatement; many of the mill’s employees have been blacklisted, making it effectively impossible for them to find alternative work. Ironically, while the workers have been characterized as “dangerous and belligerent” for their efforts to get their jobs back, it is mill officials who turn out to have been involved in violence. Former San Carlos security chief Ramiro Rengifo was recently charged for the 2000 murder of a trade unionist. According to documents from Colombia’s Office of the Attorney General, the mill has long had ties to paramilitary groups under the guise of “security agreements.” [1]

The Colombian government has strived to clean up its act in recent years, creating a new Ministry of Labor as part of its commitments in the US-Colombia Labor Action Plan (LAP). The plan was designed to improve labor rights in Colombia in the context of the new FTA (though only a few of the LAP’s provisions have been implemented to date).  Killings of trade unionists have decreased over the past decade, and Colombia is currently negotiating an end to its decades-long internal armed conflict. But less blood has yet to translate into tangible gains for Colombian workers. While both the United States and Colombia applaud the decreased violence as evidence of success, the enemies of the country’s labor movement have simply grown more savvy.

Killing union leaders has become increasingly politically costly, and tactics are shifting, Colombian union leaders report. Through targeted death threats (several of which acted upon), subcontracting, and mass firing for union activity, powerful economic interests evade labor protections and carry out attacks against organized workers. As a result of such harassment, Colombia’s unionization rate has dropped to just four percent from a onetime high of 14 percent.[2]  While the Colombian government has vowed to crack down on labor rights violations in Colombia, fines are few and far between—and of the fines levied, even fewer have been paid.

On top of the labor abuses, sugar producers have even engaged in illegal cartel-like behavior as a way to ensure profits in the notoriously volatile sugar market, according to government investigations. [3] Yet despite these violations, the U.S. Trade Representative expects the crop to make significant inroads into the U.S. market thanks to last year’s FTA.[4]

During a recent visit to Washington, DC, Colombian Minister of Labor Rafael Pardo told WOLA that the San Carlos firings were “voluntary resignations.” That, Carrillo has said, is a lie: “I was intimidated by a Mr. Oscar Aguera from HTM, who said—ten centimeters from my face—that if I didn’t sign the resignation agreement, this would ‘bring many consequences.’” At a company with ties to paramilitaries, within a sector notorious for assassinations, in a country still years from peace, one can only imagine what he meant.

[2] See The Horrific Costs of the US-Colombia Trade Agreement, The Nation. http://www.thenation.com/article/174589/horrific-costs-us-colombia-trade-agreement#axzz2aS2K9oIN

Adam Schaffer provides research and support for work on Colombia, Andes, and Drug Policy for the Washington Office on Latin America (WOLA).