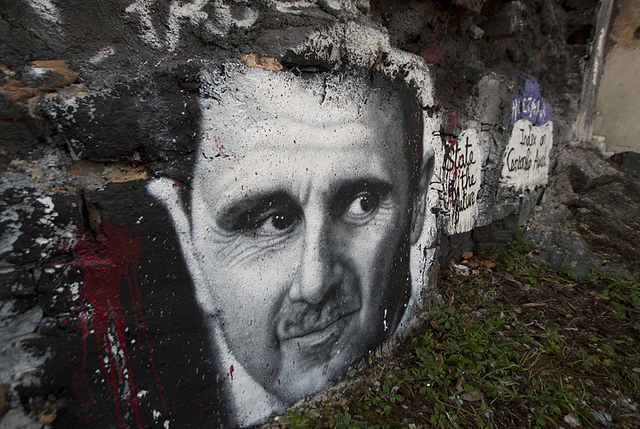 Latest Round of Syrian Peace Talks Stumbles Out of the Blocks

Yet again the Syrian conflict has taken the front pages of the western media outlet with the announcement that another UN-sponsored Syrian peace talk is underway in Geneva. The latest round, which began last Friday in Geneva, is an attempt to bring a number of groups to the negotiating table that have nothing in common. The so called the Syrian opposition group, which is supported by the Saudis, Qataris, Turks and other regressive regimes in the region, have indicated that they intend to boycott this round of discussion as well unless their demands are met prior to negotiation despite US’s insistence that they should participate with no condition. Mike Whitney, in his latest piece in Counterpunch, used the situation in eastern Oregon to assess the rationality of these demands under the current circumstance. He explained:

To appreciate how ridiculous these demands are, one would have to imagine a similar scenario taking place in the United States. Let’s say, for example, that Ammon Bundy, the crackpot leader of the armed militia that seized the federal wildlife refuge in eastern Oregon, demanded that the FBI and all other federal agents vamoose while the UN convened negotiations between his representatives and the Obama administration for the establishment of a transitional government that would remove Obama from power after 18 months while rewriting the constitution so it better reflected the far-right political and religious convictions of Bundy and his gaggle of ne’er-do-well followers.

Does that seem like a reasonable proposition to you? This is the context in which the current “talks” are being held. Is it any wonder why Moscow doesn’t take this charade seriously? It’s a joke.

The notion that this round of negotiations in Geneva may be able to resolve the crisis in Syria created for regime change by the US, naturally with the cooperation of the usual regional puppets such as Saudi Arabia, Qatar, etc. (enlisted for plausible deniability) is ludicrous to begin with. Even the UN envoy, ambassador de Mistura admits that this is an uphill battle to say the least.

From the very beginning, Washington’s sole aim has been to topple Syrian President Bashar al Assad so the oil fields and pipeline corridors could be secured by the western oil giants and protected by new US military bases sprinkled across the country. (Read the Doha Protocol.) This has been the basic game plan since Day 1, and this is why Obama and Co. are so eager to slow the Russian-led offensive by any means possible even if it means engaging in meaningless negotiations that have no other purpose than to implement a ceasefire so that the current US mercenaries can regroup and fight at some future date when they are better prepared. Unfortunately for Obama and Co. this is not going to work, at least not this time, for the following reasons:

One: The Russian presence and involvement in the Syrian conflict has changed not only the balance of power but the whole game plan. What Obama and Co. are not getting is that not only is the Russian president seeing through this ploy, but after months of slow but steady progress, the Russian-led coalition (Syrian Army and its regional allies) has broken through the floodgate and is advancing on all fronts while enemy positions (the so called “moderate oppositions”) are crumbling one after another. Key cities and towns in Latakia province along the Turkish border that used to be one of the strongholds of the terrorists have buckled under Russia’s relentless bombing raids and been liberated by the Syrian Army. Aleppo, Syria’s biggest city to the north has been surrounded by loyalist forces that have cut off supply lines to Turkey leaving fighters from Salafi groups like Ahrar al Sham, Jabhat al Nusra, Jaish al Islam, ISIS and the other al Qaida-linked groups to either surrender or hunker down while they await the final desperate confrontation. The momentum has shifted in favor of Assad’s forces, which now clearly have the upper hand. What the western media characterizes as a “quagmire” has all the makings of a stunning victory for the Russian-led coalition that is gradually reestablishing security across Syria while sending the invaders running for cover. This is from Reuters:

Three months into his military intervention in Syria, Russian President Vladimir Putin has achieved his central goal of stabilizing the Assad government and, with the costs relatively low, could sustain military operations at this level for years, U.S. officials and military analysts say.

The Russian Air Force campaign turned out to be the ultimate game-changer. It is in the process of securing the Damascus-Homs-Latakia-Hama-Aleppo network – urban, developed western Syria that holds 70 percent of the country’s population. ISIS/ISIL/Daesh and/or Jabhat al-Nusra, a.k.a. al-Qaeda in Syria, have zero chances of taking over this territory. The rest is mostly deserted land. Jabhat al-Nusra –  remote-controlled by Ayman al-Zawahiri – is intimately linked to a gaggle of Salafi jihadists in the Saudi-sponsored Army of Conquest, as well as tactically allied with myriad outfits nominally grouped in the nearly extinct Free Syrian Army (FSA).

By now it should be clear that the winners, as it stands, on the ground, are the “Axis of resistance” and the losers are Saudi Arabia, Qatar, and Turkey. So no wonder the Saudis want at least some of their proxies at the negotiating table in Geneva, while Turkey tries to change the subject by barring the Syrian Kurds: these are accused of being terrorists, much more than ISIS/ISIL/Daesh.

Two: Another major change that the US and its western allies are not prepared to understand is that Russia no longer is prepared to play by the old rules. This was spelled out by the Russian Foreign Minister Sergey Lavrov during his important year-in-review press conference on Jan. 26, before an audience of about 150 journalists, and well-known representatives of mainstream Western media. The purpose of this annual event was to look back at issues faced by the Russian Foreign Ministry over the past year and to give the minister’s appraisal of results achieved. During his opening remarks that were succinct, lasting 15 minutes, he made it clear that he agreed with Western leaders who said there would be “no more business as usual” between Russia and the West. He asserted that:

“Our Western colleagues sometimes declare with passion that there can no longer be ‘business as usual with Russia.’ I am convinced that this is so and here we agree: there will be no more ‘business as usual’ when they tried to bind us with agreements which take into account above all the interests of either the European Union or the United States and they wanted to persuade us that this will do no harm to our interests. That history is over and done with. A new stage of history is dawning which can develop only on the basis of equal rights and all other principles of international law. We are open for cooperation with everyone on an equal, mutually advantageous basis.”

What Lavrov is saying loud and clear that Russia is no longer prepared to play by the rules that protected Western interest especially that of US at the expense of Russia. This realistic position taken by Russia may have extreme ramifications if, for reasons that one cannot explain, Turkey decides to escalate the confrontation and use the defeat of its allies in the northern Syria as an excuse to invade Syrian territory as Ataturk did in 1930s and annexed a large part of Syrian territory. (There are rumors to that effect already.)

This is not a farfetched analysis. Experts have been predicting that the NATO allies are urgently trying to implement a new plan to hold control at least of the northern oil corridor from Iraq and try to take advantage of this opportunity to involve Russia in a long expensive war. This plan includes an occupation of the crucial infrastructure including oilfields by the NATO contingent and establishing of anti-government, meaning anti-Russian and anti-Iranian, forces in parts of divided Syria.

If Russia uses its Kurdish allies in the YPG to seize a stretch of land along the Syrian side of the Turkish border to reestablish Syria’s territorial sovereignty and to stop the flow of terrorists from Turkey into Syria. Erdogan has promised that if the YPG pursues that course, Turkey will invade, in which case, Putin will come to the defense of the Kurds. There’s no telling how this powderkeg situation will play out, but there’s no doubt that the next few weeks are going to be extremely tense as the main players rattle sabers and jockey for position while edging closer to a full-blown conflagration. Will cooler heads prevail?

Only time will tell. What we can say at this stage is that Washington has already backed off its “Assad must go” campaign and moved on to Plan B, which is seizing territory and establishing bases in Northeastern Syria that the US plans to occupy for as long as it can. Turkish invasion of Syria be it at Washington’s behest, would certainly remove any chances for the US to have any say in the outcome of the events. Russia is not prepared to accept anything that tampers with its regional interest.