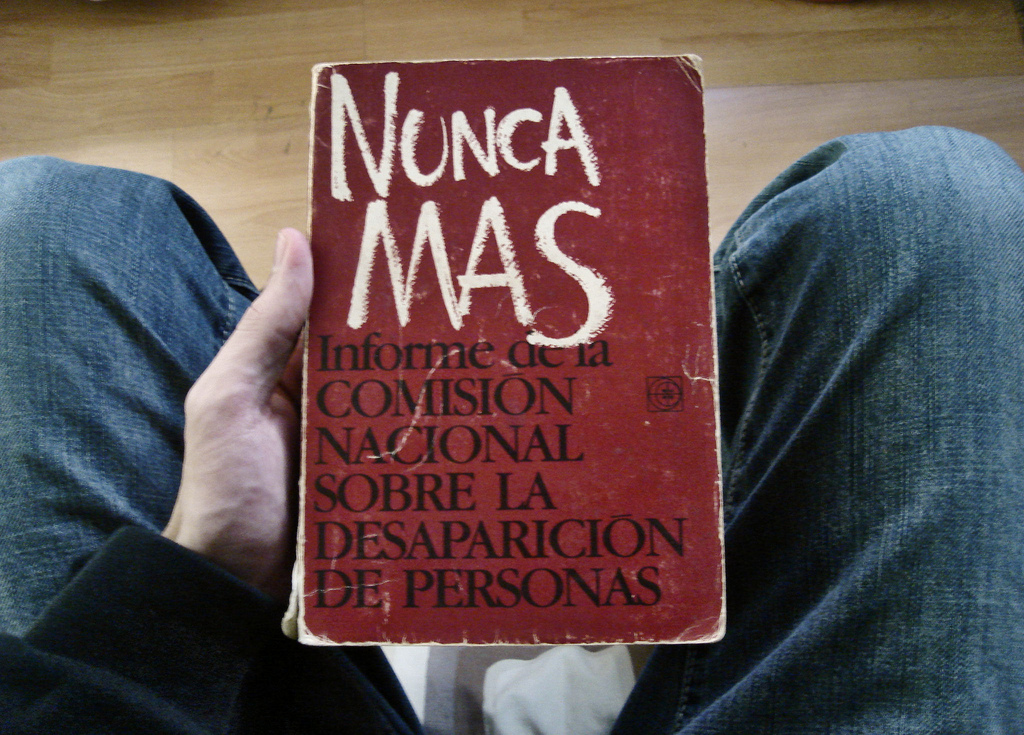 Latin America’s Lesson for the U.S.: Prosecute the Torturers

Latin America's transition out of dictatorship hinged on two words the U.S. would be wise to heed: "Never again."
By Jo-Marie Burt | December 11, 2014

This article is a joint publication of Foreign Policy In Focus, NACLA, and TheNation.com.

The Senate Select Intelligence Committee report on torture has revived debate worldwide about the United States’ use of torture in the aftermath of 9/11. ­

Some have applauded the report — including organizations such as Human Rights Watch and the Center for Constitutional Rights, which have pushed for a full accounting of the use of methods prohibited by U.S. and international law, as well as accountability for those who made such methods official state policy. They also note significant shortcomings — including the Senate’s failure to release the full report, a four-year delay in the release of the summary, and the redaction of key information, including details that would help establish a clear chain of command.

Those who supported the torture policy — including some of those who put it in motion, such as former Vice President Dick Cheney — have decried the report, accusing its authors of bias and reasserting their claims that torture helped keep the United States safe from further terrorist attacks (a claim never proven). But they do not deny that torture was used.

As an academic and long-time human rights activist, I welcome the release of the Senate report. Hard-nosed fact-finding and truth-seeking is important in the aftermath of atrocity. A report of this nature can help set the record straight about what happened and determine, based on careful review of the evidence, whether such atrocities were the doing of a few “bad apples” or of systematic state policy. This is important even though it was known long before that the U.S. use of torture was indeed official state policy during the Bush years.

A report like this can also generate national debate about controversial “interrogation” methods, help citizens evaluate and reevaluate their views of such methods, and determine whether these assessments should be followed by other actions —including, potentially, criminal prosecutions.

Many of my fellow U.S. citizens vehemently repudiate the use of torture, at home or abroad. I have worked over the years with hundreds of academics, practitioners, and activists in the United States who have dedicated their lives to ending torture and other human rights abuses in Latin America and around the world.

Yet others believe the official discourse repeated ad nauseam during the Bush years that torture — referred to euphemistically as “enhanced interrogation techniques” — was both necessary and effective to obtaining key information to prevent future attacks.

As I write this, I’m listening to an NPR reporter interview a former CIA official during the Bush years repeat such claims. When the reporter presses him for concrete examples, he only cites opinions of government officials, demurring that perhaps such information could have been obtained using other methods but, if so, would have taken more time.

Such disingenuous statements should fool no one at this point, yet I know that many continue to hold this belief. It’s my hope that they will read this report and be shocked by its revelations: that the United States of America, which purports to be a beacon of freedom and liberty, a defender and advocate of human rights, sanctioned the use of torture — and that this is not only a juridical aberration, but a moral one as well. It is my hope that it will lead them to rethink their views, and repudiate torture and its use forever, here and around the globe.

Which leads me to my second point about the Senate report. Its revelations are important on their own, but they also underline the fact that the U.S. government engaged in patently illegal behavior, both by the standard of its own law and by the standard of international law. The UN Convention against Torture, which the United States signed and ratified — and as such is bound by its provisions — establishes not only the illegality of torture, but also the obligation of states to investigate, prosecute, and punish those responsible for committing torture. The United States stands in blatant violation of its international obligations by failing to move forward on a credible path of criminal prosecutions of those most responsible for the torture program. As such, it undermines its standing in the international arena — and obliterates its credibility as a defender and advocate of human rights around the world.

My own research focuses on Latin America, a continent that, when I first began working there, was beset by brutal military dictatorships and fratricidal civil wars. Many of the countries emerging from the dark night of authoritarianism and civil conflict turned to a relatively new practice: the creation of official commissions of inquiry, dubbed “truth commissions,” that set out to investigate fully the abuses of the past, acknowledge the horrors endured by victims, and make recommendations to provide repair to victims and ensure that such abuses never occur again. The catchphrase Nunca mas! — “Never again!” — became the rallying cry of a generation emerging from the dungeons of dictatorship and one of the cornerstones of the modern human rights movement.

In the early experience of truth commissions, only Argentina sought to link truth-seeking with criminal prosecutions of those most responsible for the design and implementation of a systematic policy of forced disappearances. Several former generals were indeed prosecuted and convicted as the intellectual authors of these crimes, but military unrest led the new democratic government to impose amnesty laws to limit further prosecutions. Later a blanket amnesty was imposed, ending prosecutions completely and those few prosecuted were set free, installing institutionalized impunity.

Elsewhere, fragile transitions in which the army remained powerful and seemingly threatened the new democracies led leaders to avoid prosecutions altogether, focusing primarily on truth-seeking, and in some cases, reparations for victims. In Chile, for example, President Patricio Aylwin, heeding the warning of outgoing dictator General Augusto Pinochet that “not a hair on the heads of my men will be touched,” demurred in favor of a policy of “justice insofar as possible.” That meant that torturers continued to enjoy their freedom, while victims were robbed of their right to justice for the wrongs committed against them — including torture, forced disappearances, extrajudicial executions, and sexual violence.

But today, years later, many Latin American countries have moved past this situation of impunity for human rights abuses. Amnesty laws have been overturned or ignored, and criminal trials have moved forward in several countries, including Argentina, Chile, Uruguay, Peru, and Guatemala. This has not been a linear or uncontested process — indeed, in many instances there have been setbacks, as in the quick overturning of the genocide verdict against former Guatemalan dictator Efraín Rí­os Montt last year — but the fact remains that Latin America is leading the way in demonstrating that it is possible to investigate and prosecute some of the worst abuses committed during prior governments.

Some of the most heinous dictators of the region have been tried and convicted — Argentina’s Jorge Rafael Videla, Peru’s Alberto Fujimori, and Uruguay’s Juan María Bordaberry, to name a few — and democracy in those countries is the stronger for it. On December 10, the Brazilian National Truth Commission — 50 years after the military carried out a coup d’état and established one of the longest standing dictatorships in modern Latin American history, and 29 years after the transition to democracy in 1985 — released its own report, outlining the abuses committed during its dictatorship and calling for prosecutions of the surviving military officers responsible for these horrendous abuses.

I refuse to believe that it is not possible for the United States to do the same. We are a wealthy, powerful nation with a robust democratic tradition. If we do not prosecute those responsible for torture, we run the risk not only of such heinous practices being used again, but of destroying the very democracy we claim to hold so dear.

Torture is an affront to human dignity. It cannot be justified, ever. And when it is done in our name, it is our responsibility to act: to stand up, say never again, and insist that those responsible be held accountable.

Jo-Marie Burt teaches politics at George Mason University. She is former editor of NACLA Report on the Americas, and was a researcher for the Peruvian Truth and Reconciliation Commission. As a Senior Fellow at the Washington Office on Latin America (WOLA), she was an international observer to the Fujimori and Rios Montt trials. She is currently writing a book about human rights prosecutions in Latin America. Follow her on Twitter @jomaburt.