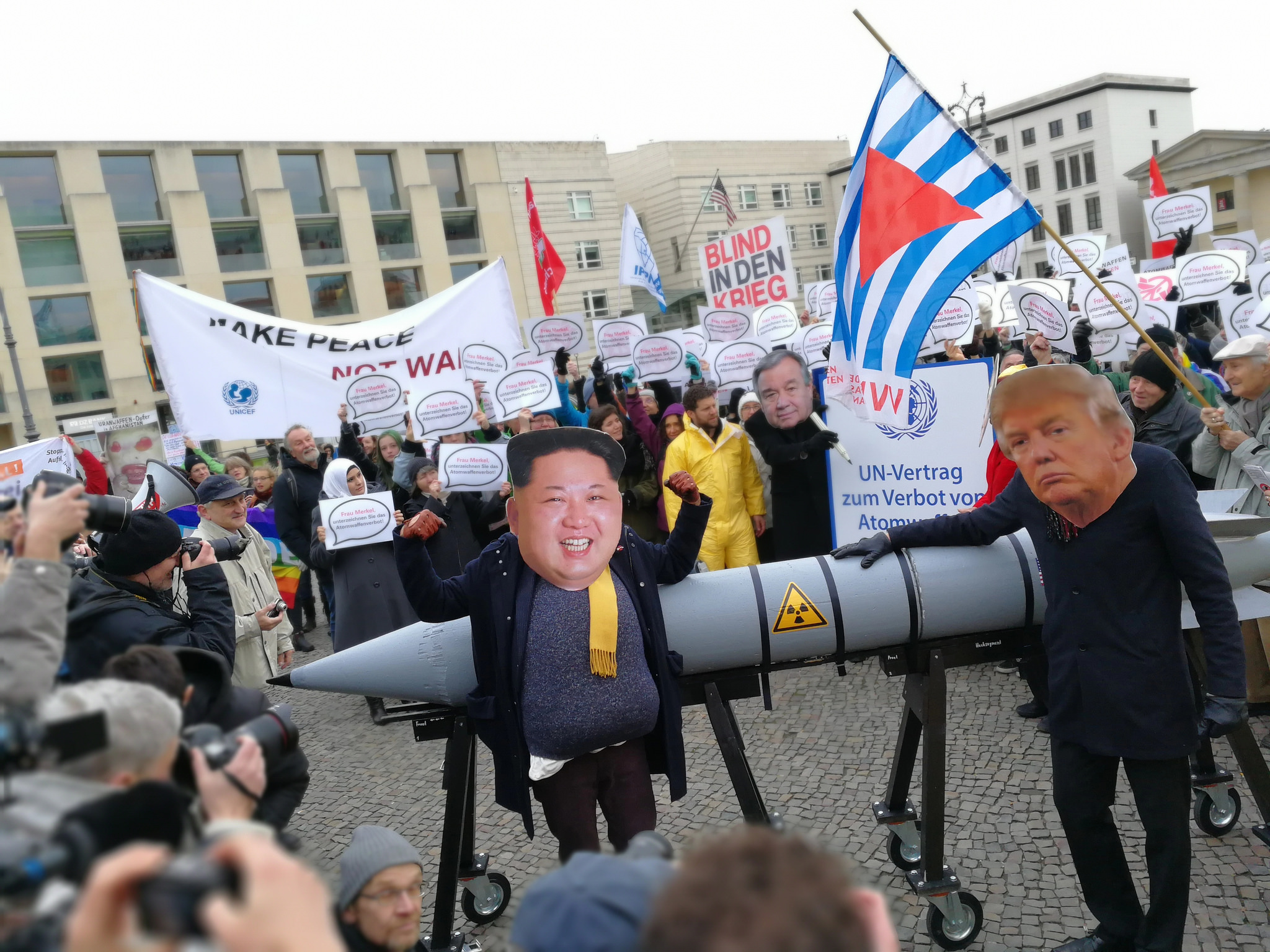 Lawmakers Are Scrambling to Prevent Trump from Launching a Nuclear War

The most effective way to prevent a nuclear war with North Korea is to reassure them that the U.S. won't strike first.
By Lisa Fuller | November 29, 2017

Two days later, Rep. Adam Smith (D-WA) introduced a bill that could therefore save civilization. The entirety of the No First Use bill reads: “It is the policy of the United States to not use nuclear weapons first.”

The risk of nuclear war is at an all-time high, according to Former U.S. Secretary of Defense William Perry and expert Scott Sagan. Smith’s bill could be one of the most effective ways to mitigate that risk. It would substantially reduce the likelihood that either the U.S. or North Korea would start a war, whether through a pre-meditated attack or as a result of miscalculation.

First, the policy would constrain the Trump administration from launching a preventative nuclear strike on North Korea — a scenario that has become a realistic possibility.

The problem isn’t only that nobody can stop Trump from realizing his long standing desire to use nuclear weapons. It’s also that Trump’s advisers may now be more likely to toss him the nuclear football than to pry it out of his hands.

As U.S. intelligence indicates that North Korea could attain such capabilities in early 2018, former U.S. General Barry McCaffrey’s predicts that we’ll be at war by summer 2018. North Korea’s latest missile test confirms that they are making rapid progress.

Rep. Ted Lieu and Sen. Edward Markey had enough foresight in January to introduce other legislation intended to prevent Trump from launching a pre-emptive strike. Unfortunately, their bill had too many loopholes to be reliable — including an exception in the event of an “imminent threat.”

Unfortunately, the restriction becomes impotent if the Trump administration uses “elastic definitions of the phrase ‘imminent threat,’” as the Cato Institute’s John Glaser puts it. Given Trump’s propensity for stretching the truth, it’s safe to assume that he considers definitions to be elastic as a general rule.

Smith’s bill, in contrast, allows scant wiggle room. Unless we fall down the Orwellian rabbit hole into a world where “war is peace and freedom is slavery,” it will be difficult to falsely claim that North Korea dropped a nuclear bomb.

Of course, a U.S. pre-emptive strike isn’t the only way to start a war — North Korea could also initiate hostilities. Smith’s bill would reduce the likelihood of that scenario as well.

While the CIA and independent experts agree that Kim Jong-un would only launch a pre-emptive attack if he believed that a U.S. offensive was imminent and unavoidable, the risk of miscalculation remains high. Misunderstandings and computer errors nearly led to nuclear war between the U.S. and the Soviet Union on at least seven occasions during the Cold War.

Given that U.S. and North Korea are not even on speaking terms, the risk of miscalculation is even higher now. Even when Cold War tensions peaked during the Cuban Missile Crisis, President John F. Kennedy and Soviet Premier Nikita Khrushchev were in direct communication.

Plus, it would be understandable if Kim were feeling a little jumpy, given that the U.S. has deployed all of the military assets needed to launch an offensive over the last three months — including aircraft carriers, ships, and submarines armed with missiles, as well as bombers, munitions, and fighter jets — and has been practicing large-scale attacks off the Korean coast.

The most effective way to reduce the chances that Kim Jong-un will press the nuclear button would therefore be to convince him that the U.S. won’t drop the first bomb.

Opponents of Smith’s bill would likely claim that this strategy is counterproductive because it undermines U.S. deterrence capabilities. However, as Senator Ben Cardin points out, this argument is based on Cold War realities, and doesn’t apply to the North Korea crisis: Unlike the Soviet Union, North Korea doesn’t have the ability to obliterate U.S. nuclear assets in a first strike.

There is little reason to believe that the North Korea crisis will de-escalate if we continue on our current trajectory. Sanctions are unlikely to succeed, diplomatic deadlock has set in, and talks have ceased. Trump will continue to spout off threats and other dangerous rhetoric as long as he retains the ability to speak or tweet, and he may well undermine any serious attempts to restart diplomacy.

As long as Trump is in office, therefore, the No First Use bill is our best hope of preventing war.

Our survival may depend on it.

Lisa Fuller spent the past eight years as a senior staff member and a civilian peacekeeper at Nonviolent Peaceforce, working in war zones such as Iraq, South Sudan, and Sri Lanka. She currently writes about civilian peacekeeping and conflict prevention. Follow her on Twitter: @gigipurple.