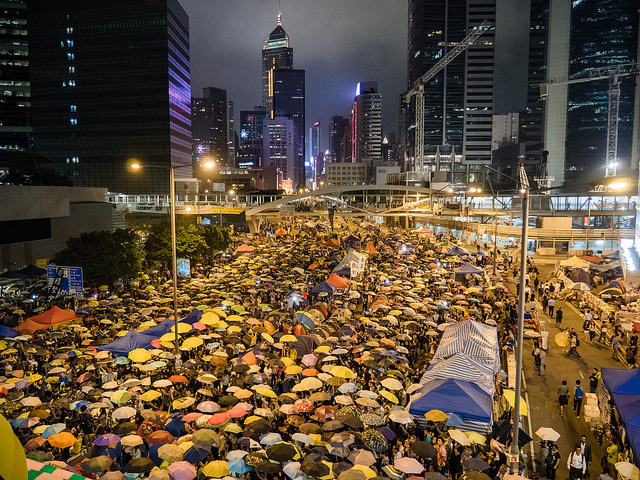 The goals of the Umbrella Movement did not resonate with much of Hong Kong’s public. (Photo: Pasu Au Yeung / Flickr Commons)

A Lesson from Hong Kong in Pragmatism vs. Liberalism

The lack of majority support for Hong Kong’s Umbrella Movement is an example of developing nations’ inclination towards pragmatism, not liberalism and civil rights.
By Keith K C Hui | December 18, 2014

While thousands of young elites risked their career future to launch an Occupy Central campaign for democracy (focus on free nomination for government’s chief executive candidateship), more than half of the Hong Kong citizenry disagreed with either their ideals or strategies, and asked them to go home. Such a cleavage has provided an insight for understanding the dynamics of international tensions in the 21st century.

After two university polls showed that 55% and 83% of the respondents said respectively the protests should cease, and a group “collected 1.8 million signatures from citizens (total population 7 million) who want the protest to end” [Note 1], many Western analysts and journalists observed that “the protests have cracked the city in two” and accurately described the polarization as a “generational divide” [Note 2].

In the 1940s-60s, more than one million mainland Chinese refugees rushed into Hong Kong which was then a tiny British colonial entrepôt, to seek food and shelter.  Their children, born in the 1950s-60s (equivalent to the post-WWII baby boomers in the United States), inherited the motto of these refugees — we are born naked with nothing except our hands to earn a living. The scholars who wandered along with the refugees and formed the New Asia College in 1949 here (which was integrated into the Chinese University of Hong Kong in 1963) imbued the youth to endure hardship by their school anthem “… hands are empty, not even one item, … starve my body, labor my soul, … tons of burden, on two shoulders …” [Note 3] which is in line with the ancient Chinese philosophy of striving for a good life on each one’s own from ground zero onwards.

These two generations of people did it so well that, on a piece of about 1,100 square miles rocky land, Hong Kong’s “economic size is slightly bigger than Israel and Ireland and its GDP per capita at purchasing power parity is the sixth highest globally in 2011, higher than the United States and the Netherlands” [Note 4].  Today, they are aged 50s-80s, and they never doubt their success formula — your life begins with nothing and you must work practically and realistically to enrich your life.

But the refugees’ grandchildren reject this “nothing in hand theory”. Learning from books, teachers, media and so on, they have been told that at the first moment they came to the Earth as a human being, they were born with certain unalienable human rights. Other than certain socio-economic rights in the pockets, one of the political rights around their waists is “the right to vote and be voted”. Only by exercising this right to pick a caring local leader, the new generation believes, can Hong Kong become a fair and blooming society.

When this right is denied by the government, it sounds like one of their personal belongings has been robbed. These young vanguards, ranging from teenagers at high schools to university graduates, want this right back in their hands without delay. While they apologize repeatedly for the inconvenience caused to the public, the young phalanx firstly controverts their elder generations’ elucidation that the “kids” should adopt a step-by-step approach to claim the right, and secondly asserts their acts of civil contumacy righteously justified.

The generational divide and the futile 79-day Umbrella Movement have revealed the core and strength of pragmatism — opulence is the top priority whereas political equality is neither urgent nor essential for a decent life.

By zooming out from Hong Kong to view the global cultural divide from this perspective, some analysts have noticed that the aspirations of human rights and democracy by the West are being challenged by a Chinese model of realizing visible living standard improvement under a non-democratic system. In India, for example, tens of interprovincial railways were delayed for 10 to 20 years owing to various “constituency” issues or oppositions from indigenous people over the past three decades [Note 5]. In China, during the same period, the rail track network rapidly expanded from 53,300 km in 1980 to 103,144 km in 2013, alongside the construction of a 13,000 km high-speed railway system from 2007 to 2015, all under the central command [Note 6]. Together with various other modern infrastructures, the efficient and reliable Chinese logistics assure overseas firms such as Apple and H&M that the fulfillment of their manufacturing orders and delivery of their products are always on time. Then, with the influx of numerous jobs and investments, millions of people on the mainland crawled out of poverty quickly, thanks to Deng Xiaoping’s design.

Like it or not, Deng’s model appears to be a showcase for the idea that political equality (and certain political freedoms), which has never been a Chinese philosophical ideal since ancient times, may not be a necessary condition for economic success for at least 34 consecutive years so far. Carrie Gracie, the BBC China Editor, recently highlighted the phenomenon that “the aspirations of the young protesters of Hong Kong did not immediately resonate with their counterparts on the mainland” and “despite having ever greater contact with the West … many young Chinese are suspicious of idealistic political messages” [Note 7].

Peoples in some other countries have also become more skeptical about whether the Western ideals could bring them both justice and prosperity. Some frontline journalists have voiced their warnings: “the majority of Arabs — who saw free speech as the only gain from Arab Spring upheavals — now seem willing to accept the loss of this universal human right, in return for promises of stability and economic prosperity” [Note 8].

Domestic violent confrontations between the hasty GDP-boosting authorities and the idealistic youngsters will no doubt continue to take place in Hong Kong, mainland China, Russia, Eastern Europe, the Middle East, Africa and Latin America.    Bleeding will not stop inside this boxing arena between universal liberalism and pragmatism, but unless the foreign policy makers and pundits in the West can realize that there are cultural and philosophical elements in this clash, impetuous foreign policy may backfire, thus suffering from a painful knockout someday.

The Times of India, “Over 50% central infra projects behind schedule”, Dec 30, 2010.
http://timesofindia.indiatimes.com/india/Over-50-central-infra-projects-behind-schedule/articleshow/7187604.cms