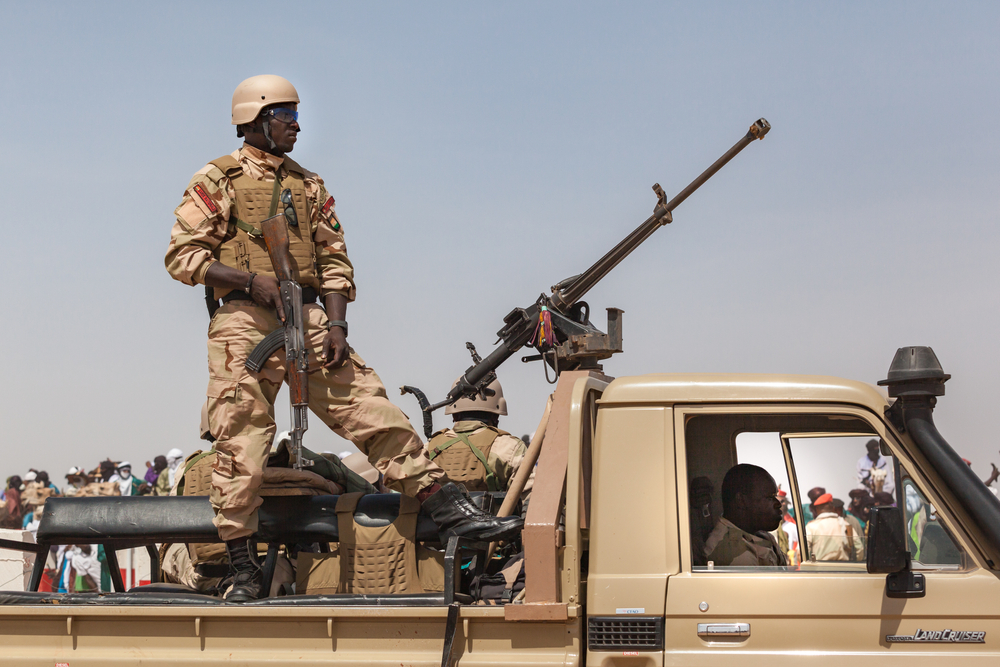 There will be no peace if underlying grievances aren’t addressed, militaries victimize local populations, and states fail to provide basic services.
By Elizabeth Schmidt | March 26, 2020

Late last year, President Trump provoked a furor when he declared his intent to withdraw some 1,400 US troops from West Africa, where he claimed they had quelled the terrorist threat. He sparked a similar firestorm when he announced that the U.S. would (eventually) pull 14,000 troops from Afghanistan, where they were engaged in an 18-year conflict against other violent extremists.

Establishment figures claimed that the battle against violent extremism was far from over and that U.S. military leadership was critical to victory. They pointed to ongoing insurgencies in the African countries of Mali and Nigeria in the Western Sahel and Somalia and Sudan in the Horn. Other progressives countered that U.S. policies have been ill-conceived and counterproductive — and that foreign military intervention has exacerbated the crises.

The establishment debate misses the point. Mainstream critics haggle over how many troops are needed, which nations should supply them, and where they should be deployed. The real question is whether present counterterrorism strategies are effective — and if not, what policies should be implemented instead.

Evidence from Africa makes it clear that military solutions do not work, and prescriptions imposed from above and outside often fail. Local initiatives that address underlying grievances have been more effective. But their impact will be limited without fundamental social, economic, and political change. To effectively counter violent extremism, the U.S. must withdraw support for the corrupt and repressive governments that foster discontent and assist local endeavors that address the people’s needs.

The disagreement between mainstream and progressive critics in the U.S. is rooted in fundamentally different visions of the role of the United States in the world community. Most establishment intellectuals embrace the notion of American exceptionalism, arguing that the United States is a unique force for good in the world, and to fulfill its mission, it must maintain its position at the helm of the global order.

Proponents of this view ordinarily promote military solutions, as well as economic development and (sometimes) democracy. Progressives, in contrast, reject this sanguine characterization of U.S. actions and denounce the policies that have led to endless war. To resolve the current crisis, the United States and its partners must fundamentally shift their perspective and alter their approach. Continuing on the present path will only result in greater mayhem.

Current U.S. Africa policy, developed during the Cold War, was conceived by leaders and proponents of the U.S. military-industrial complex. Marked by militarism and misunderstanding, it has failed to identify the factors that undermine human security and offered wrong-headed solutions that often exacerbate the problem. The post-9/11 war on terror has led to particularly grievous results.

Contrary to common misconceptions, religion and ethnicity are not the root causes of African conflicts.

Rather, the sources are deep structural inequalities — poverty, underdevelopment, and political repression — and the devastating impact of climate change. Governmental neglect and the drying up of Lake Chad ignited the Boko Haram insurgency in northeastern Nigeria; the expanding desert in western Sudan has pitted herders against farmers in the struggle for water and usable land; and the destruction of the fishing industry by foreign trawlers led to piracy off the coast of Somalia.

Where do we start? First, we need to determine what does not work.

Counterterrorism operations, whether conducted by the U.S. or its allies, have been catastrophic. Intervention in the Sahel exemplifies the problem. In Mali and Nigeria, government actions in insurgent areas, and externally directed drone and missile strikes, have killed countless unarmed civilians. Such actions have increased local support for insurgent forces. Military successes have generally been short-lived, as violent extremists have regrouped and shifted their focus to unprotected civilians.

Local governments backed by the United States and its allies rarely address the structural problems that triggered the conflicts. As a result, local populations, neglected by their governments, have turned to extremist groups for income, basic services, and protection. Peace agreements, imposed from above and outside, fail to give voice to affected populations and jihadi organizations have been denied a seat at the table, even though they are critical parties to the conflicts. Not surprisingly, most of the accords have collapsed.

Foreign intervention in the Horn of Africa has had similar results. In Somalia, the intensification of US airstrikes has stimulated increased extremist activity and a corresponding refocus on civilian targets. Abuses by unaccountable regimes and foreign troops have generated a popular backlash, and externally brokered peace accords that excluded local voices have resulted in a succession of failed governments.

What have we learned? There will be no peace if underlying grievances are not addressed, domestic and foreign militaries continue to victimize local populations, and dysfunctional states fail to provide basic services.

If the question is not how many troops and where should they be, what should we ask?

Instead, we need to embrace a more expansive concept of “human security” that focuses on people rather than territory and includes health, education, employment, environment, and respect for human rights and civil liberties as factors critical to human well-being. The safeguarding of both U.S. and global security requires a multidimensional approach that addresses the root causes of problems that threaten the world today.

Second, we need to acknowledge that we do not have the answers and seek out those who do. We will learn that grassroots endeavors — organized by African-led agricultural cooperatives, trade unions, and women’s and youth groups — are already addressing the grievances that spring from poverty and inequality and the conflicts that result. They have lived the experience and have developed the best solutions. They must guide our policy choices.

Third, the U.S. and its allies should support local peace initiatives that include all affected parties. Key actors should not be sidelined at their discretion.

Finally, we should withdraw our support for corrupt, repressive regimes and instead advance US and multilateral initiatives that promote democracy, human rights, and economic, environmental, and climate justice. The only path to greater U.S. security is greater human security worldwide. Although fundamental political, economic, and social transformations will take decades, they are the only solution to crises in Africa and the global south.

Elizabeth Schmidt is professor emeritus of history at Loyola University Maryland and the author of six books about Africa. Her most recent book, available for free download, is Foreign Intervention in Africa after the Cold War: Sovereignty, Responsibility, and the War on Terror.