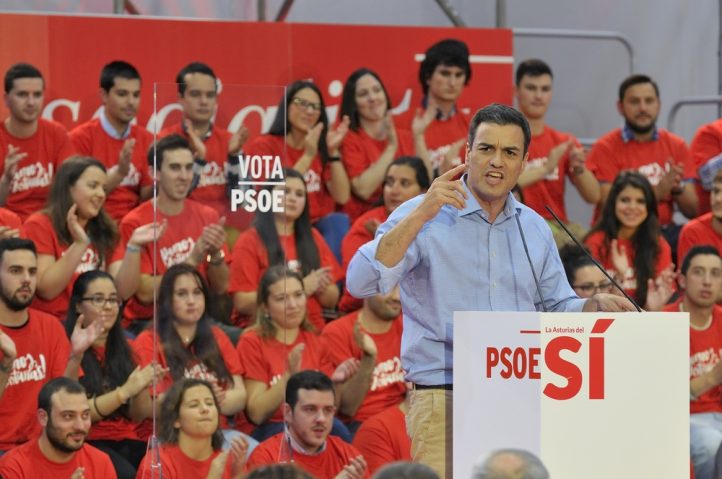 There were several lessons to take from last month’s Spanish elections, some special to Spain, others that resonate continent wide. Since the 28-member European Union is preparing to vote on the makeup of the European Parliament at the end of May, those lessons are relevant.

On the surface the outcome seemed pretty straightforward: Spain’s Socialist Workers Party (PSOE) picked up lots of seats — but not enough to form a government — while the country’s traditional center-right Popular Party (PP) took a pounding, the ultra-right edged into parliament, and the center did well.

But Spain’s politics are as complex as the country’s geography, and certainly not as simple as the New York Time’s analysis that the outcome was a “strong pro-European Union vote” that will allow Socialist Prime Minister Pedro Sanchez “to tackle Spain’s neglected economic challenges.”

For starters, the majority did not vote for the EU, but to the contrary, against the devastation the huge trading bloc has inflicted on Spain through a decade of austerity measures. The Spanish Socialists ran on a platform of jobs creation, implementing a U.S.-inspired “Green New Deal,” a 22 percent jump in the minimum wage, and greater funding for education and science — all issues that run counter to the tight-fisted policies of the EU.

Indeed, if the European Union had been on the ballot it might have gone badly for Brussels, not exactly a Spexit, but hardly a ringing endorsement.

Part of the Socialist victory reflected the profound ineptness of the opposition on the right.

For more than 40 years, the Popular Party has been an umbrella for the Spanish right, ranging from conservative businessmen and small farmers to unreconstructed supporters of the late fascist dictator Francisco Franco. But when the left-wing Podemos Party won 20 percent of the vote in 2015, it unleashed centrifugal forces that smashed up the old two-party system that had dominated the country since the death of Franco in 1975.

Besides opening the political landscape to multiple parties, including the center right Ciudadanos, or “Citizens” Party, it put immeasurable strains on the Socialist and Popular parties.

In the case of the latter, the PP’s extreme right jumped ship and formed  “Vox,” whose policies are little different from Franco’s: opposition to abortion, opposition to equal rights for women, and hostility to gay rights, immigration, and regional autonomy. The party won almost 11 percent of the vote in a recent election in Andalusia, Spain’s most populous province. It is currently part of the province’s ruling coalition, which includes the PP and Citizens, but underperformed in last month’ vote.

The PP’s turn to the right as a strategy to peel off Vox votes was a disaster. Women, in particular, felt threatened by some of the party’s anti-abortion talk, and the PP’s candidates handpicked by party leader Pablo Casado were underwhelming.

The Socialists also had their divisions. In 2016 the PSOE’s right wing engineered the ouster of Sanchez after he considered forming a government with Podemos and several small regional parties. The right wing of the Socialists then allowed the PP to form a minority government, a move that did not sit well with the party’s rank and file.

Sanchez barnstormed the country, rallying the Socialists’ left wing and taking back the party’s leadership seven months later. In this last election the PSOE stayed united, a major reason why Sanchez is in a position to form a government.

Was the election a victory for the center? There is not a lot of evidence for that. While Citizens did well — it bypassed Unidos-Podemos to become the third largest party in the parliament with 57 seats — most of its votes came from former PP members alienated by the Popular Party’s sharp turn to the right and the profound corruption that has enmeshed many of its leaders.

The PP, Citizens, and Vox all pounded away at the Catalan independence movement and immigration, two issues that did not resonate very strongly with the electorate. A poll by Spain’s Centre for Sociological Research showed that voters were most concerned with unemployment (61.8 percent), corruption (33.3 percent), and the state of the political parties (29.1 percent). Only 8.9 percent felt immigration was a major issue, and Catalan independence was a concern for only 11 percent.

In short, when the right was railing away at the Catalans and immigrants, most of the voters tuned out.

The leftist UP also took a beating, dropping from 71 to 42 seats, but that was partly due to a falling out between the two major Podemos leaders, Pablo Iglesias and Inigo Errejon, and disagreements on how closely the leftist alliance should align itself with the Socialists. In contrast, the left-wing Catalan parties did well.

Strictures Within and Without

First, there is the PSOE’s program that, if instituted, would certainly ease the austerity policies of the EU and the PP that have inflicted such pain on the bulk of Spaniards. While unemployment has come down from its height during the years following the 2008 financial crash, many of those jobs are low paying, benefit-free, temporary gigs.

A Green New Deal would confront climate change and create new jobs. Repairing the social safety net that the PP and the EU have shredded would not only make people’s lives easier, it would stimulate the economy.

But the EU is pressing for almost $28 billion in government spending cuts, that, if agreed to, would make much of the Socialists’ program stillborn. Faced with the demands of capital, on one hand, and the misery of yet more austerity, many socialist parties — with the exception of Britain’s and Portugal’s — have gone along with the strictures of the EU.

When they do, they pay the price: center-left parties all over Europe have been decimated for buying into the debt reduction strategy of the EU. Socialist parties tend to run from the left and govern from the center, but if Sanchez does that, the party’s support will evaporate.

Secondly, there is the Catalan problem. While Sanchez has pledged to open a dialogue with the Catalans, he has steadfastly refused to consider their demand for a referendum on independence. The Socialist leader argues that he is constrained by the Spanish constitution that explicitly forbids provinces from seceding. But the constitution was drawn up only a few years after Franco’s death and is deeply flawed on a number of different levels, including giving rural regions greater representation than urban areas.

The refusal of Sanchez to consider a referendum makes “dialogue” an empty phrase. It is not even clear if the majority of Catalans would vote for independence, although the policies of Madrid — in particular the brutal crushing of a referendum effort this past October, and the arrest and imprisonment of Catalan leaders — certainly seems to have increased separatist sentiment. In the recent election Catalan independence parties won a majority in the province.

Sanchez may try to construct a coalition without the Catalan parties, which would be a major mistake. Many of the Catalan parties are more simpatico to the PSOE on economic and social matters than some of the other regional parties the Socialists will try to recruit to form a government. And, as the recent election showed, people want some answers to their economic problems.

The Socialists will certainly be attacked by the right if they allow a referendum, but the PP labeled them “terrorists” in this last election and the majority of voters didn’t buy it. The referendum could require a super-majority — maybe 60 percent — to pass, because it would be folly to take the province out of Spain on the basis of a narrow win.

But the Catalan question cannot be dispersed with tear gas, billy clubs or prisons, and constitutions are not immutable documents.

For European parties on the center-left, Spain’s elections had a message: The old days of campaigning on left social democracy when you’re running for office and ruling with careful centrism once you get into power are over. People want answers.