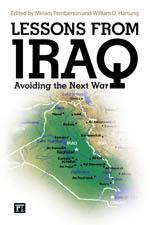 Lessons From Iraq: Avoiding the Next War

The Iraq War disaster could actually have an upside of sorts. It should put quite a few policies and practices permanently off-limits. Here's a list, to argue about.
By William D. Hartung, Miriam Pemberton | May 5, 2008

IPS research fellow and FPIF peace and security editor Miriam Pemberton has teamed up with New America Foundation scholar William D. Hartung to produce a new book that pulls together the thinking of some great minds on the lessons we should be able to take from the Iraq War disaster.

This war may actually have an upside: it should permanently discredit quite a few policies and practices. Preventive war. Politicized intelligence. Coalitions of the coerced. New frontiers of media manipulation. This book’s editors drew up a list, and asked the experts on each to boil down what they know for the rest of us. The authors include The Three Trillion Dollar War‘s Joseph Stiglitz and Linda Bilmes, pre-war UN weapons inspector Hans Blix, National Book Award winner Frances Fitzgerald, NYU legal scholar Aziz Huq, and artist-restauranteur-activist Anas Shallal.

Lessons From Iraq: Avoiding the Next War (Paradigm Publishers, 2008) is short, accessible and affordable. As Barbara Ehrenreich said, “Read this compelling set of essays and join the movement to prevent the next war.”