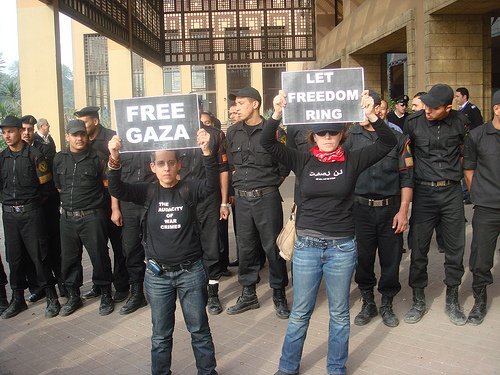 Lessons of the Gaza Freedom March

The latest attempt to highlight the crisis in Gaza captured some media attention. But a failure to balance principle with pragmatism meant that the Gaza Freedom March did not achieve its full potential.
By Walden Bello | January 2, 2010

At 8 a.m., on Wednesday, December 30, I took my seat on a bus in downtown Cairo that was about to head for Gaza.

The evening before, Medea Benjamin, co-founder of Code Pink, the central organization in the Gaza Freedom March (GFM), had asked me to be titular head of a 100-person delegation that represented the 1,362 people who had converged in Cairo on route to Gaza. The reason for this “assignment” was my status as a member of the House of Representatives in the Philippines.

The original plan had been for all GFM participants to take part in a march organized by civil society groups in Gaza that would take place on the last day of 2009. A few weeks before the scheduled march, however, the Egyptian government declined to grant permission to GFM to enter Gaza at the Rafah crossing. To prevent the marchers from descending on Cairo, it cancelled all the GFM’s permits to assemble in different buildings in the city. The government’s motives were not very clear, but the refusal apparently had to do with the government’s not wanting to provoke Israel as well as its bad relations with Hamas, the Islamist organization that controls Gaza.

The GFM had fallen victim to regional and international realpolitik.

The organizers did not cancel the march. They hoped that with the arrival in Cairo of marchers from some 42 countries, the Egyptian government would relent and allow them passage to Gaza. This proved to be a smart move. Two days of pressure – including a campout at the French embassy that was tolerated if not covertly supported by the embassy staff and a rally at the World Trade Center that houses the UN offices – pushed the Egyptian government to a compromise brokered by Susan Mubarak, wife of the country’s president: a representative delegation of 100 people would be allowed to cross the border into Gaza. Under the circumstances, many people, including myself, felt this was best deal we could get. Code Pink, the key group behind the march, began to pick 100 people to form the delegation, taking pains to ensure representation by country and organization.

It proved to be too good to be true. The steering committee of the GFM initially endorsed the plan. However, in a meeting that went till 4 am on December 30, the steering committee consensus fell apart. One reasons was that the Egyptian foreign ministry released a statement characterizing the 100 that were going as the “good elements” of the GFM while the “bad ones” were those left in Cairo. To some, this was government propaganda that needed to be taken in stride and not allowed to disrupt the Gaza mission. To others, it called into question the legitimacy of the convoy.

It was, however, too late to get word of the lack of consensus to the handpicked 100 who had started assembling, along with others who still had hopes of getting into the buses, as early as 6 a.m. near the Isis Hotel at the foot of the October 6 Bridge near Tahrir Square. By 8 a.m., a group had gathered at the departure point shouting epithets at those in the buses, calling us “divisive,” “traitors,” or “collaborators with the Egyptian government.” These participants in the Gaza Freedom March were demonstrating against those of us who were supposed to represent them in Gaza! That we were a solidarity delegation put together to help break Israel’s siege of Gaza was completely forgotten. We were suddenly vilified as pawns of the Egyptian government.

I had seldom witnessed a more awful display of naive, misguided politics. The protesters actually thought that the 100-person delegation compromise was a sell-out and that by holding tough they could get the authoritarian Egyptian government to relent and allow all 1,362 of us to march into Gaza. What planet did these people think they were on?

At that point the leadership collapsed. Some organizers who just the night before had been recruiting us for the delegation were calling on us to get off the buses because the convoy “did not represent” the Gaza Freedom March. Things became even more surreal when important Gaza and West Bank-based leaders of the Boycott Divestment and Sanctions Movement (BDS) and PENGO, the Palestinian Civil Society Collective, called in to dissuade the buses from going to Gaza because it would “divide the movement.”

Until that point, I had been arguing with the hotheads bullying me to get off the bus, telling them that I was going to Gaza as an act of solidarity between the Philippines and the people of Gaza and Palestine. But when the leaders of the GFM in Cairo and their counterparts in Gaza turned their backs on us, I decided that going on the bus was no longer tenable. The convoy was orphaned, denounced by the GFM and disowned by some of its organizers. The 65 who eventually left represented no one but themselves, and they faced an uncertain reception in Gaza.

On December 31, the day that they were supposed to be marching in Gaza, a much-reduced group of marchers valiantly carried out actions in different parts of Cairo that were easily contained by Egyptian security forces. Nevertheless, these demonstrations, which included a spirited rally of several hundred people at noontime in Tahrir Square and a candlelight ceremony at midnight, caught the attention of the international media and showed that the rest of the world had not forgotten the people of Gaza. Indeed, with several marches taking place on the same day in Gaza itself, in Israel, and in a number of cities throughout the world, the “break the siege in Gaza day” was largely successful. Despite the failure of the main action in Egypt, the protests highlighted global concern with the plight of the people of Gaza.

The GFM was an idea that inspired so many people in Gaza and throughout the world. People with the best of intentions and with great dedication came to Cairo expecting to go to Gaza. Organizations like Code Pink performed herculean efforts to make the march a reality. Indeed, assembling 1,362 people from all over the world in one place for a Palestinian solidarity event was an accomplishment in itself. And many of the marchers who came to Cairo did not feel their efforts were in vain since their mass actions, including the long camp-out at the French embassy and a much publicized hunger strike, did help call global attention to the plight of the people of Gaza.

When all is said and done, however, the reality is that neither the international marchers nor their representatives were able to get into Gaza (the 65 who did go only represented themselves). Whatever its intentions, the Egyptian government behaved terribly. Although arguing that it wanted to protect the state’s interests, the Egyptian government ended up revealing its authoritarian visage, and this was not pretty. But one must also fault many of the key leaders of the march for failing to educate the marchers on the limits of civil society pressure in an authoritarian state, to teach them that the compromise of a 100-person delegation was not a sell-out but the best deal possible under the circumstances. Instead of bravely taking on this complex task, most of the leadership unfortunately folded at a critical moment.

The GFM, which so many of us wanted to succeed, fell short of its goal. Yet from this outcome may come successful ventures in Palestinian solidarity in the future, provided we absorb the lessons of Cairo. One key lesson is that we must quickly shed political naiveté and learn to balance adherence to principle and pragmatism, something that was sorely missing here. We must get rid of the “all or nothing” mentality that is often mistaken for principled progressive politics but simply leads to political paralysis.

Walden BelloWalden Bello is a member of the House of Representatives in the Philippines representing Akbayan (Citizens Action Party), a senior analyst of Focus on the Global South, and a Foreign Policy In Focus columnist.