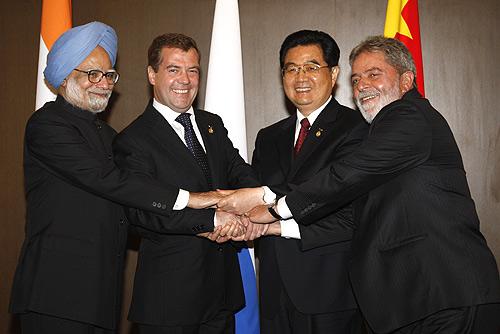 Libya: Where Are the BRICs?

Brazil, Russia, India, and China did not support the UN resolution on the use of force against the Libyan government. What does this mean for the new world order?
By Ben Zala | March 21, 2011 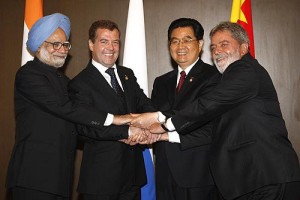 Following the vote at the UN Security Council, the United Kingdom, France, and the United States have embarked on military action against Gaddafi’s forces in Libya. They have been careful to include a few Arab states in this new coalition of the willing. But these three countries are the driving force behind the imposition of a no-fly zone and the attacks on the government’s military positions and forces. Yet among the permanent and non-permanent member of the Council who were asked to authorize “all necessary measures” to protect civilians rebelling against the regime, the BRIC powers of Brazil, Russia, India, and China were conspicuously absent. The implications of this Security Council vote will be far greater than just what happens to the Gaddafi regime for it also tells us something about the role of the new candidates for global leadership.

Brazil, Russia, India, and China are all represented on the Council at the moment — Brazil and India currently hold non-permanent seats — and collectively have become the face of what has been presented as the irreversible shift in global power toward a multipolar world. Goldman Sachs, for instance, has breathlessly ascribed to these four countries the ability to dramatically alter the global economic landscape over the next 50 years. If such projections are accurate, the key question is whether these new powers will seek to overturn the existing US-led order or simply join it as more equal partners. This question extends to China’s “peaceful rise,” the way that India and Brazil climb their way to the top-tier of global politics, and Russia’s re-emergence on the back of sustained high energy prices.

China and Russia are not surprisingly reluctant to engage in Western-led military action under the principle of the “responsibility to protect.” Both countries have significant internal turmoil and both prefer to hold on to the option of responding with brute force to domestic opposition if push comes to shove. For India and Brazil the story is not quite so straight forward. Although neither country has been particularly enthusiastic about the concept of a responsibility to protect, both have spent considerable political capital to appear like responsible stakeholders and serious players on the world stage. Both would dearly love a permanent seat on the UN Security Council with its power of veto and prestige of higher social status. Both look to the United States to facilitate such a move and assist with dampening the protests of their respective regional rivals, Pakistan and Argentina. So far India has been very successful in winning U.S. and UK support, and Brazil is hoping that a visit by President Obama this past weekend will spur the United States to join France in publicly supporting a Brazilian seat.

In the short term, however, the Brazilian and Indian abstentions on the Libya vote will not likely have helped to advance their plans for permanent membership of the Security Council. President Obama’s strategy for dealing with America’s relative decline and the rise of these new centers of power has been to try and co-opt potential challengers wherever possible into existing structures rather than set up showdowns for the decades to come. Yet this strategy is not fool-proof and leaves plenty of room for new powers to resist the liberal foundations of the U.S.-led order painstakingly constructed since 1945.

The uprisings across the Arab world have thrown up a number of problems for Western powers. Their time-honored position of attempting to ignore the deep marginalization of large swathes of the “majority world” and to contain or manage corrupt regimes for the sake of assured energy supplies and intelligence cooperation has come apart at the seams. The brutality of the Gaddafi regime and the belated and chaotic response of rightly incensed countries such as Britain, France, and the United States have forced the hands of these reluctant interveners at the 11th hour.

The Western response to the Libyan crisis has not addressed how this fundamental tension between a responsibility to protect vulnerable people and a global order based on the principle of national sovereignty can be resolved with the full participation of the emerging BRIC powers as well as the established trans-Atlantic ones. The people of Libya may be glad that such a large and difficult question has not been allowed to prevent outside assistance as they face down Gaddafi’s forces. But the United States and its allies will not be able to ignore this problem for long if a peaceful transition to a new global order is to be achieved in the years to come.

Ben ZalaForeign Policy In Focus contributor Ben Zala manages the Sustainable Security Programme at the Oxford Research Group. He works on issues of global security and great power politics and is also a member of the editorial team of the academic journal Civil Wars (published by Routledge).