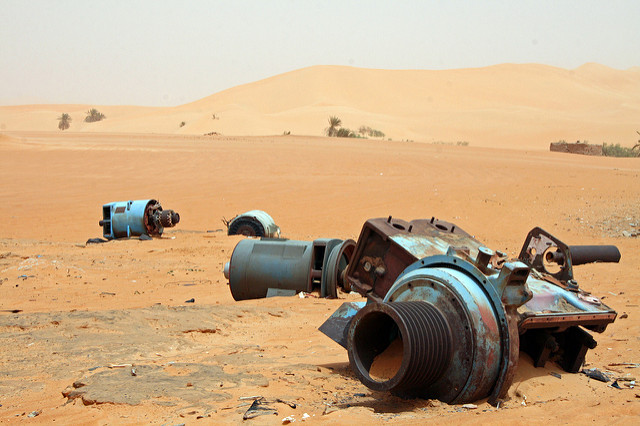 Behind the veil of NATO, the U.S. contributed heavily to the wholesale destruction of Libya. (Photo: Carsten ten Brink / Flickr Commons)

Most Americans are oblivious to the suffering we have caused to the people of Libya.
By Rob Prince | July 1, 2016

What has happened in Libya since 2011 is heartbreaking. Its denials aside, the Obama Administration bears the lion’s share of the responsibility. Worse, nobody  cares – or hardly anyone – here in the United States. As far as the current American political discussion goes, the Libyan crisis is on the back burner. For the political class, the media, the ethical dimension of destroying a nation with the goal of getting cheaper and more plentiful oil is nonexistent. As an example of how far off the deep end the country’s leaders could go in defending the indefensible, the Libyan invasion, Democratic Presidential hopeful, Hillary Clinton referred to it as “smart power at its best.” “Smart power at its best” or imperial power at its most arrogant?

In the case of Libya… “Humpty Dumpty” didn’t “fall” – but was pushed by NATO, an organization which gives the United States the veil of plausible deniability for arranging what is nothing less than the wholesale destruction of a country. Perhaps “obliteration” would be a better word. NATO has not been able to put Libya back together again. Nor is it certain that NATO intends to, at least not in the form it previously took: a centralized (if authoritarian state) which had the ability to negotiate hard with foreign energy companies and the governments that serve them.

At the time of this writing (late June, 2016), forces of Libya’s new Government of National Accord (GNA) were conducting a military offensive against Sirte where Western media sources estimate that some 5-8,000 Islamic militants are holed up, defending the city. As has been the case since the 2011 NATO-led and inspired overthrow of Muammar Gadaffy, at Sirte, it’s essentially militia versus militia, “ours” against “theirs,” made more dramatic perhaps because the militias ensconced at Sirte belong to the Islamic State. The fighting at Sirte is portrayed as the first real test for the GNA, a test of their legitimacy, but this is hardly the case.

To call the Tripoli-led, UN-supported Government of National Accord (GNA) “a government” is stretching credulity. In reality, like “the Syrian Opposition” it is little more than a loose, bickering group of militias slammed together through international pressure to give the Libyan fiasco a semblance of progress. Should the GNA forces, guided by U.S. and British special forces, manage to defeat the Islamic State, given that it functions essentially as a guerrilla movement, the victory would be less than meets the eye as the militants do what militants do – disappear into the great Libyan (and Egyptian and Tunisian) desert to regroup and fight again. In fact, in the long run, it will mean very little.

Admittedly there has been a considerable amount of Congressional and media attention concerning the possible role that Hillary Clinton, then Secretary of State, played in the 2012 Benghazi incident resulting in the death of U.S. Ambassador J. Christopher Stevens and U.S. Foreign Service Information Management Officer Sean Smith. But even the Benghazi investigation has backfired after Seymour Hersh, that consistent and always well-informed thorn in the side of U.S. military intervention, revealed that the Benghazi consulate little more than a cover, a facade that the C.I.A. was using to recruit Libyan jihadists from Serna (in Libya) to fight in Syria against President Bashar al-Assad.

In many ways, Libya got caught in that great regional political wave for greater democracy referred to as the Arab Spring. Events in Tunisia and Egypt in 2011 gave confidence to Libyan democrats and human rights activists. Muammar Gaddafi had delivered an element of prosperity to the country but without establishing democratic political processes. It turns out that offering a people half a loaf, prosperity without democracy, is a raw deal. Gaddafi might have learned that lesson from the peoples of East Germany, Hungary and what was then Czechoslovakia. Economically they were prosperous enough, but at the same time politically repressive, stifling not just dissent, but participation in their countries’ future.

In any case, as the Libyan voices for greater democracy got louder, Gaddafi became more repressive although there is no evidence, none whatsoever, that the pretext for NATO intervention – a genocidal campaign against his own people, particularly in the Benghazi region – was in the offing. Outside intervention in the form of the usual C.I.A. machinations, and the bombing campaign itself intensified that opposition and directed it against Gaddafi, who was eventually murdered in Sirte.

Similar dynamics were unfolding elsewhere in the region at the same time, in Syria and Yemen – i.e., popular protests for greater democracy that were soon co-opted or undermined by Salafist-Wahhabist elements ultimately supported, indirectly or directly, by Western powers. The more genuine movement for reform or revolution derailed.

Washington’s interest in overthrowing Gaddafi had little to do with his authoritarian tendency. In fact the overthrow of Gaddafi was a classic example of what Naomi Klein called the “shock doctrine”: overthrow a region (or take advantage of a natural disaster) to reshape a country or region along neoliberal lines. As Mahdi Darius Nazemroaya noted:

Oil, finance, economics and Libyan natural resources were always tempting prizes for the United States and its allies…While Libyan energy reserves and geo-politics played major roles in Western forces launching the war, it was also waged in part to appropriate Tripoli’s vast financial holdings and to supplement and maintain the crumbling financial hegemony of Wall Street and other financial centers. Wall Street would not allow Tripoli to continue to be deb-free, to continue accumulating international financial possessions, and to be a creditor nation giving international loans and investing funds in other countries, particularly in Africa. Thus, major banks in the United States and the European Union, like the giant multinational oil conglomerates, had major roles and interests in the war on Libya.” (1)

It is easier for foreign energy companies to dictate contract terms on more fragmented units than the centralized governments that existed in Iraq, Syria or Libya. The energy portion of the equation is to be able to squeeze more oil for less money from countries hoping to use the profits from energy for their own development.

The tensions within Libyan society were genuine and admittedly Gaddafi’s record was mixed offering his people half a loaf – prosperity without democracy. Still, he had popular support. Without intense and sustained outside intervention, his government would not have been overthrown. There was plenty of evidence, which the Obama Administration and the mainstream media in the United States conveniently chose to ignore, that Muammar Gaddafi enjoyed broad support among Libya’s citizens.