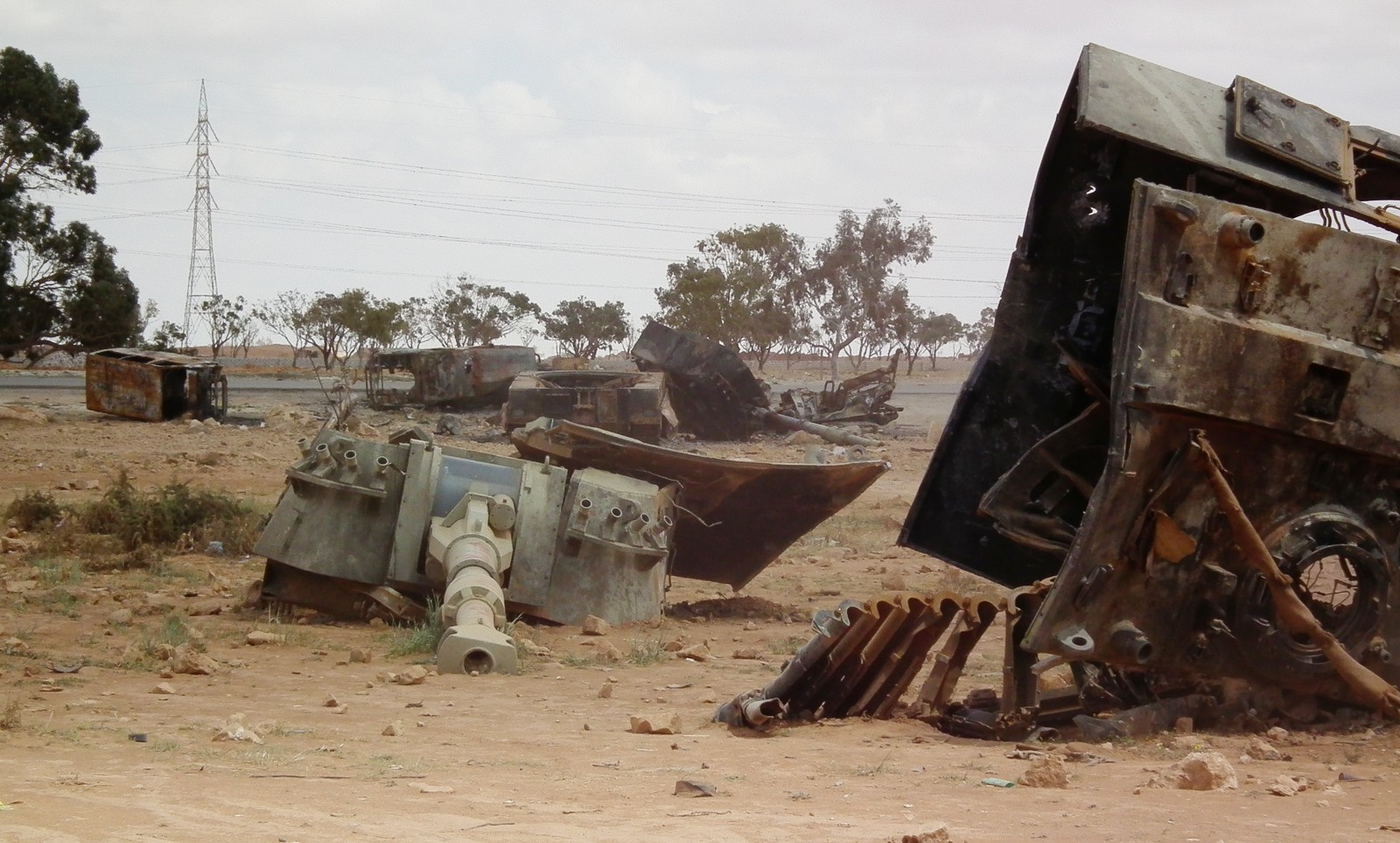 Syria’s new UN-approved government is little more than a loose alliance of militias loose alliance thrown together to provide Libya with a semblance of progress. (Photo: Wikipedia)

“Smart power at its best,” as Hillary Clinton called our intervention into Libya, doesn’t seem like much of an improvement over the heavy-handed use of force.
By Rob Prince | July 5, 2016

Cross-posted from View from the Left Bank. Read part 1.

On July 1, 2011, in the midst of the NATO bombing campaign a huge rally opposing the bombing and in support of Gaddafi took place in the center of Tripoli and other Libyan cities. Nationwide, it is estimated that two million people braved the bombs to show their sympathy, solidarity with the Libyan leader and his “Jamahiriya” government. In spite of that support, playing on the contradictions that still remained inside Libya, the United States and its allies were able to engineer the overthrow of Gaddafi.

While the C.I.A., among other things was busy recruiting Libyans to fight in Syria, the devastating consequences of the Libyan invasion, referred to by NATO head Anders Fogh Rasmussen as “the most successful mission in NATO history”, went largely unreported, unnoticed. During the seven months of its air campaign, NATO flew 26,500 bombing sorties over Libya, more often than not targeting civilian and infrastructural facilities as it did previously in Iraq. In the U.S. media, the usual blackout conditions continued with virtually no reporting of horrors unfolding on the ground, and certainly no formal acknowledgment that the United States contributed to the destruction and collapse of yet another country (Iraq, Syria).

The bombing campaign and war left more than 30,000 dead and hundreds of thousands homeless. No doubt five years after the overthrow of the Gaddafi government by a NATO-led coalition, Libya remains in a state of utter chaos, a center of regional instability that has already spread to neighboring countries, Tunisia, Mali, even distant Burkina Faso and Nigeria. Today Libya is one of Africa’s poorest and most unstable places, a spawning ground for regional instability and war throughout North Africa and the Middle East as a whole. Libya’s functional apparatus as a state was shattered, its oil in the hands of bandits, the country essentially divided into warring enclaves much like Somalia. How fractured? Ben Macintyre writing in The Times of London gives substance to the term “shattered.” Today “Libya is home to an estimated 1,700 armed groups divided along ethnic, religious and political lines, and a staggering arsenal of cheap guns. It is one of the most fractured countries in the world.”

The country’s geography, social peace and progress – not just propaganda but a genuine accomplishment of the Gaddafi years – is in shambles, seemingly forever; the country, or what’s left of it, once a model of economic and social progress for all of Africa, has been transformed into a basket case. Gaddafi’s Libya had no foreign debt, the lowest divorce rate in the world and one of the highest overall living standards in Africa or the Middle East. All that is history. Geographically, Libya is hardly Libya; it is essentially split into the three near-autonomous regions that existed when ruled by the Ottomans, before these were pressed together into one unit by an early 20th Century Italian invasion and occupation, consolidated after World War Two by the British. The pretext of protecting the Libyan people from Gaddafi’s secret police evaporated almost immediately after his fall. As Patrick Howlett-Martin recently noted:

Three months after the end of hostilities (October 2011) the United Nations High Commissioner of Human Rights, Navi Pillay, reported the widespread use of torture, summary executions and rape in Libyan prisons. At the same time, the organization, Doctors Without Borders, decided to withdraw from the prisons in Mistrat because of the ongoing torture of detainees.

With Gaddafi gone and the centralized Libyan state dissolved, the dam inhibiting massive emigration from all over the African continent through Libya to Europe burst asunder, creating in its wake a sociopolitical crisis for many of the same countries responsible for the chaos. Libya has become a jumping-off point for migrants from all over Africa hoping to make the death-defying journey across the Mediterranean to reach a non-existent nirvana in an increasingly hostile Europe and the broader dimension of utter viciousness of NATO’s Libya venture comes more clearly into focus.

More than a million migrants and refugees crossed into Europe in 2015, the lion’s share from Libya. Of that number no less than 3,770 drowned en route. The scale of the crisis continues, with more than 135,000 people arriving in the first two months of 2016 alone; 2,100 of them lost their lives trying to cross to Italy in the first five months of this year alone. Hailing from all over Africa and the Middle East in an effort to escape war and unremitting poverty, they are willing to risk all – death in the Mediterranean being preferable to life in Somalia, Syria, Afghanistan and many places in sub-Saharan Africa.

Those countries gleefully involved in the actual orgy of violence against the Libyan nation gave a nice cover for what was essentially a U.S.-planned and orchestrated successful effort to overthrow a legitimate government. If General Wesley Clark’s analysis is accurate, overthrowing Gaddafi was part and parcel of a broader plan to institute regime change – the new way to characterize the overthrow of governments that one way or another displease Washington – in seven countries: Iraq, Syria, Lebanon, Libya, Somalia, Sudan and Iran. If the memo has to date never seen the light of day, the plan itself appears to have been implemented in a number of these countries; when Iran was recently taken off the front burner, the neocons who devised it in the first place (Wolfowitz, Cheney, Rumsfeld, idiots like John Bolton) howled …and continue to.

In the case of overthrowing Gaddafi, the key players were the United States, Great Britain and France, with a supporting cast of thousands, providing the Obama Administration with the cover it needed to claim plausible deniability for having orchestrated the whole affair. Sharing in the massacre (and proud of it!!) were Belgium, Bulgaria, Canada, Denmark, Greece, Italy, Jordan, Netherlands, Norway, Qatar, Romania, Spain, Sweden and the United Arab Emirates,

Five years into the Libyan fiasco the mess created by NATO’s “victory” over Gaddafi could not be greater with little end to the chaos and suffering in sight. The invasion of Libya – its humanitarian interventionist pretexts aside – was little more than “old fashioned 19th century imperialism with a 21st century sheen on it.” So much of the country was devastated by NATO’s bombing campaign which took place over a seven-month period from March to October, 2011 when a UN Security Council “No Fly Zone” morphed into an aggressive air campaign in flagrant violation of international law.

The pretext for military intervention – all U.S. military interventions since the end of World War II (and many prior to that) have needed them – was that a humanitarian crisis had exploded in the country and that Muammar Gaddafi was about to commit mass murder (from the air) to crush a rebellion in the eastern Libyan city of Benghazi. Yet, like Saddam Hussein’s non-existent weapons of mass destruction, the proof of such intent was either minimal, or as some have argued, completely unjustified. Few in the United States questioned the irony of what Washington was doing raising the banner of “humanitarian intervention,” a pretext which willingly seduced many American liberals. It rang hollow, but once again, it worked. After all, the United States had dropped more bombs over Vietnam than it had in World War II, killing between 3 to 4 million Vietnamese. It had worked to install some of the worst dictators in modern times in Latin America, helped engineer the torture, assassination and disintegration of the body of Congolese patriot Patrice Lumumba (and other African nationalists).

All this suffering for what?

As former U.S. Congresswoman, Cynthia McKinney, notes in her introduction to The Illegal War In Libya, which she edited, at the time of the January, 2011 NATO led invasion of that country…

Libya did not bomb another country. Libya did not directly, or through the use of proxy forces, indirectly attack another county; it did not distribute Viagra to its military to encourage the rape of its own citizens as was propagandized by the US and its NATO allies in order to build public support for a grand theft of Libyan assets and resources that is one of the results and clearly one of the objectives of NATO’s Operation Unified Protector.

Like Iraq and Syria, Libya is a mess, a human tragedy, created primarily in Washington DC., the depth of which hardly resonates with the American people, the consequences of which the world will live with for a long time to come.