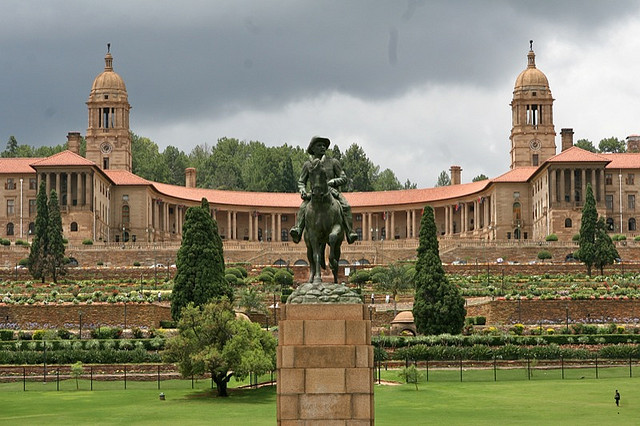 Like Iran, South Africa doesn’t like being told what to do with its nuclear material by the United States, a country rich in all things nuclear.
By Russ Wellen | March 20, 2015

At the Center of Public Integrity on nuclear materials, Douglas Birch has written a two-part series on nuclear security in South Africa. In the first, titled “South Africa rebuffs repeated U.S. demands that it relinquish its nuclear explosives,” co-authored with R. Jeffrey Smith, they write about the quarter ton of highly enriched uranium that South Africa still retains decades after ending its nuclear-weapons program in 1989. U.S. officials fear that it could be stolen and fashioned into a terrorist bomb.

For instance, in a little-known incident in 2007, two teams of attackers infiltrated a research facility in which uranium was housed before they were halted. Oddly, no one was charged. Birch and Smith:

The episode still spooks Washington, which as a result has waged a discreet diplomatic campaign to persuade South Africa to get rid of its large and, by U.S. reckoning, highly vulnerable stock of nuclear weapons fuel.

But South African President Jacob Zuma, like his predecessors, has resisted the White House’s persistent entreaties and generous incentives to do so, for reasons that have partly baffled and enormously frustrated the Americans.

In Birch’s piece later in the week titled South African who attacked a nuclear plant is a hero to his government and fellow citizens (yes, that’s actually the title), he writes about another incident you likely never heard about. Present-day citrus farmer Rodney Wilkinson (a white)

… planted four bombs that caused hundreds of millions of dollars in damage to the Koeberg nuclear power plant north of Capetown in December 1982, in what is arguably one of the most ambitious and successful terror attacks against a nuclear facility anywhere.

But Wilkinson is not a pariah in his homeland.

Why? Because it was an anti-apartheid act and “many South Africans still revere anti-apartheid guerillas who bombed power plants, military targets and government offices as heroes, although some of the attacks caused civilian casualties.” In fact

This divergent history, some experts here say, partly explains why Pretoria and Washington don’t share the same level of concern about the threat of nuclear terror.

South African officials say that Washington overplays the threat of nuclear terror, and in doing so threatens to block access by smaller countries to uranium enrichment and other nuclear-related technologies. U.S. officials say in response that South Africa simply does not take seriously the risks created by these materials and technologies.

In other words, as University of Michigan historian Gabrielle Hecht told Birch for the second article:

… that difference in perspective, among other important factors, makes nuclear security a lower priority for South Africa than the prospect of establishing energy and economic security from nuclear power, which might involve the use of enriched uranium.

Here you see echoes of other states such as Iran objecting to the double standard by which nuclear powers attempt to dictate which states are allowed nuclear energy, with its dual-use capabilities. We will close with a touché line from the first article:

Zuma’s appointees assert that it’s absurd for the United States to obsess over the security of the country’s small nuclear explosive stockpile, while downplaying the starker threat posed by the big powers’ nuclear arsenals.