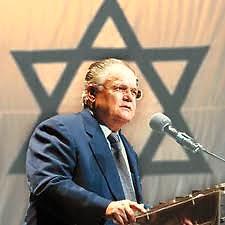 Lindsey Graham Ready to Play the “Last Card” on Iran

Lindsey Graham is no longer just rattling his saber at Iran — it now looks like he’s en garde and ready to face off against the Islamic Republic. At ThinkProgress, Ben Armbruster reports that, on Tuesday (July 23), the Republican senator from South Carolina said

“If nothing changes in Iran, come September, October, I will present a resolution that will authorize the use of military force to prevent Iran from developing a nuclear bomb,” … “The only way to convince Iran to halt their nuclear program is to make it clear that we will take it out,” Graham said, echoing comments he made last week, calling the war authorization “the last card to play in a very dangerous situation.”

Not only is he talking about playing the last card, he’s playing to the cheap seats. Senator Graham was addressing Christians United for Israel (CUFI), fundamentalist kingpin John Hagee’s suspicious foundation. In 2008, at Politico, Ben Smith reported in 2008:  “Hagee is viewed with distrust by some Jews and Israelis because his brand of Christian Zionism closely links support for Israel to the end of the world and the conversion of the Jews to Christianity.”

Though in 2012, at the Jerusalem Post, Jeremy Sharon reported that CUFI executive- director David Brog brushed that off.

He labeled the claim that Evangelicals support Israel in order to herald the return of Jesus and the conversion of Jews as “complete and utter nonsense,” and said such claims were based on “ignorance.”

Christians, he said, do not believe that anything on Earth can influence the messiah’s coming and that his arrival will be at a preordained time.

Instead, he said, Evangelicals support Israel because of a literalist interpretation of the Bible that views the promises made to the people of Israel as still intact – as opposed to ”Replacement Theology,” which is widely held by many other Christian denominations and posits that the Christian Church inherited the biblical promises to the Jewish people.

In any event, you may wonder how Sen. Graham and religious organization can argue for war, knowing the devastation it will wreak on a country that doesn’t seem to have anything close to a nuclear weapon. Armbruster found this quote by Graham from 2010.

I don’t really have time to try to figure out exactly what he means. He seems to be suggesting that the prospect of a nuclear attack by Iran – never mind how unlikely that scenario – is more troubling than mounting a preventive attack on Iran. But, my guess is that failure to acquaint oneself with the facts – the absence of a nuclear-weapons program in Iran – and a failure to use your imagination to devise another solution in the event that it did constitute a serious sin in the eyes of their God.