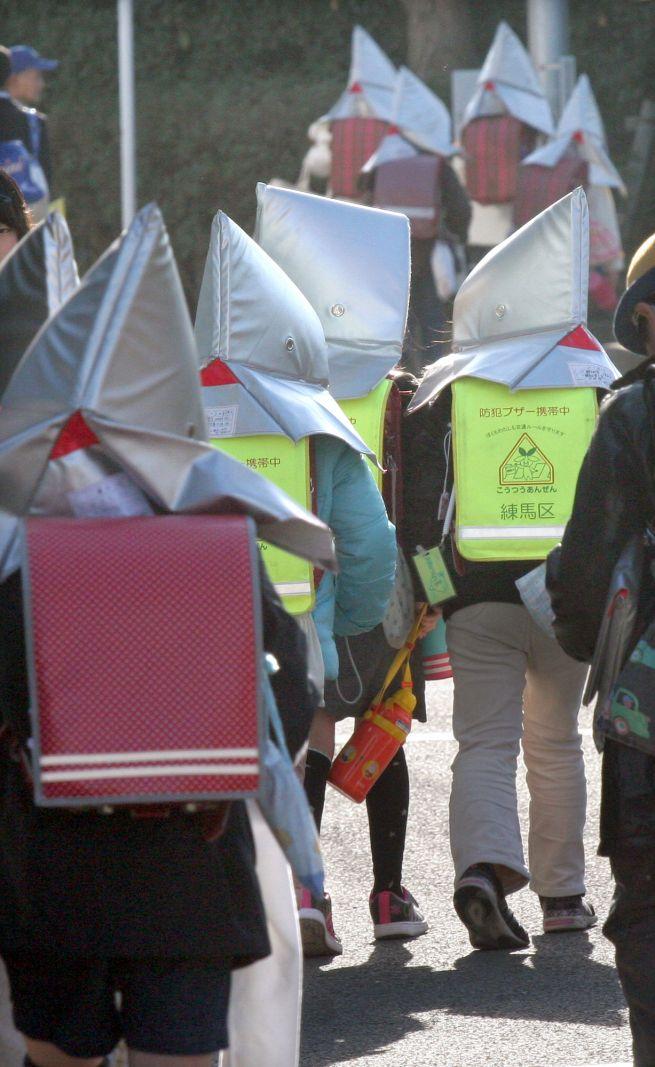 During this ongoing nuclear disaster, Japanese leaders should do a great deal more to safeguard the children of the country.
By Alexis Dudden | March 28, 2011 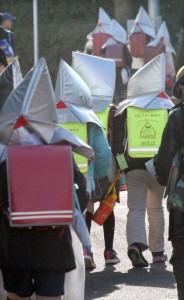 Following the terrible earthquakes and tsunami in northeastern Japan on March 11, schoolchildren as far away as Tokyo have been going to school wearing pointy silver hats to protect them from potential fires and debris during ensuing aftershocks. For some, too, the shiny hoods function as ineffectual radiation shields, a poignant sign of Japan’s deepening unease over the ongoing meltdown at the Fukushima nuclear power plant.

But the problem is not the hoods but whether the children should be going to school at all. Regardless of what the hats will do — and regardless of whether they are intended to protect from flying flaming shards or meltdown — the curious part of the Japanese government’s “Let’s Get on With Life as Usual” plan for kids in afflicted parts of Japan is that it flies in the face of caution.

The Japanese government, in its effort to reassure the population, has in fact placed more people at greater risk, particularly children.

By chance my five-year-old son and I were traveling in Japan with friends during the last two weeks when this awful series of natural and man-made crises began. By greater fortune, we were able to leave Japan just as various governments put their respective evacuation orders into play. This enabled us to witness, for example, Japan’s entire French population lined up at Osaka’s international airport for its nationally ordered airlift.

Most impressive, however, were the growing number of self-propelled Japanese refugee families, those privileged enough to travel to other parts of Japan or abroad. They were well-dressed, neatly packed into carry-on suitcases, and wearing crisp white masks.

Those with means were leaving. Those without had to make do with little silver riding hoods or their equivalent.

During World War II, voluntary evacuations of schoolchildren began in December 1943 when the U.S. fire-bombings of Japanese cities began. Japan’s infamous wartime Prime Minister Hideki Tojo opposed mandatory evacuations because they would weaken the family structure. By the time the United States decimated Tokyo in March 1945, over one million children had already left, yet only then did Tojo’s government order all children between third and sixth grades to leave to ensure the nation’s future. Tojo wanted to make sure there would be Japanese left to fight Japan’s future wars.

What the world learned from the horrible histories of the U.S. bombings of Hiroshima and Nagasaki is that radiation affects children much more than adults. Now is not the time to err on the side of risk.

A Tale of Two Responses

Much has been made of the divergence between the Japanese and American response to the man-made nuclear calamity, which has compounded Japan’s horrific natural disasters. Washington has issued a significantly wider no-go zone around the nuclear plant than has Tokyo, and on March 21 the U.S. State Department amplified its already unprecedented advisories for Americans announcing distribution of potassium iodide tablets to all Americans remaining within 300 miles of the ailing reactor. On March 23, the Japanese government announced that Tokyo’s tap water was not safe for infants, and on March 25, the prime minister said he did not know when to expect the nuclear situation to be under control and began encouraging “voluntary” evacuations for those closest to the plant. New confusions and fears are becoming standard. On March 28, the Asahi newspaper reported that at least 60 people had been left behind in the no-go zone despite local authorities’ assurances a week earlier that the area was cleared.

Trying to get on with life still may appear to make the most short-term sense, yet it may come with the greatest long-term public health costs. Evacuating all young people already transferred to shelters in the north and now trapped in an increasingly dangerous radioactive cloud would save lives. A further pragmatic step would be to evacuate pregnant women within 200-300 miles of the nuclear plant. Smarter still — yet sure to create the largest general alarm and even protest — would involve sending all school children within 200-300 miles of Fukushima to safety.

A decidedly Japan-centered plan might entail sending children from the north, rich and poor, to Japan’s south to help with the spring rice planting. There, they could learn all sorts of things about their country’s history and economy while actively helping cultivate safe food resources for those in affected areas in the north. Those parents that object could refrain from participating. The U.S. government should also rise to the occasion. In addition to the aid it is taking north, it could house and feed children on U.S. bases such as Sasebo on the country’s southwestern coast.

Most Japanese aren’t as fortunate as I was the other day. My son and friends and I were just visiting Japan. We were tourists, not the nation’s future. In an era when Japan’s greatest challenge is its declining population, the government should go to greater lengths to safeguard this future.

Alexis DuddenAlexis Dudden is a professor of history at the University of Connecticut, a contributor to Foreign Policy In Focus, and the author of Troubled Apologies Among Japan, Korea, and the United States (Columbia University Press, 2008).