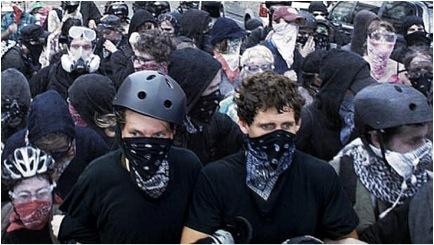 A new documentary, Better this World, looks at the role of FBI informants in the domestic war on terror.
By Rehanna Jones-Boutaleb | July 6, 2011 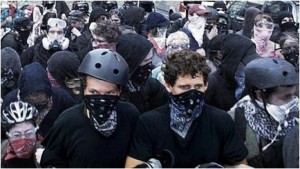 On August 28, 2008, two childhood friends from Midland, Texas, Bradley Crowder and David McKay, traveled north to join thousands of protesters at the 2008 Republican National Convention (RNC). In the company of six Austin activists, Crowder and McKay were ready for adventure, and prepared, in Crowder’s words, to protest to “change the world.” What began as a journey of hope, however, ended in sudden catastrophe. Crowder and McKay’s efforts to mark their opposition to the Republican administration and the U.S. involvement in Iraq resulted in multiple charges of domestic terrorism and a high-stakes entrapment defense in federal court. What the “Texas Two” hadn’t realized in Minnesota was that their trusted comrade, Brandon Michael Darby – the very activist to whom they had looked for inspiration and guidance – was in fact an FBI informant.

Tracing Crowder and McKay’s saga from its very origins, the 2011 documentary Better this Worldcunningly unveils the intricacies of the two protestors’ federal trials, as well as the media sensation they precipitated. The film, which is scheduled to air nationally on PBS’s “POV” series, not only provides a nuanced perspective of two alleged cases of domestic terrorism but also cuts to the heart of the “war on terror” and its effect upon civil liberties.

Aiming to go beyond the “nice-kids-turned-domestic-terrorists” narrative propagated by mainstream media sources, film-makers Kelly Galloway and Kelly Duane de la Vega have turned their attention to the viewpoints of the key players themselves: Crowder, McKay, and Darby. Although both directors are clearly sympathetic toward the convicted Texas youths, they take care to interview multiple FBI agents and prosecutors, providing viewers with conflicting approaches to the trials. The result is a documentary thriller that stands as both a compelling character study and a necessary reminder of the broader themes behind McKay and Crowder’s testimony, namely the post-9/11 security apparatus and the use, and abuse, of informants in the government’s “war on terror.”

Playing out against the backdrop of the RNC in St. Paul, Minnesota, Better this World opens with visceral footage from the 2008 protests. These recordings, alongside testimonies detailing McKay and Crowder’s involvement with Austin’s progressive scene, reveal that both youths were not only newcomers to the activist community but also indisputably shocked by what they encountered in St. Paul. There was, in Crowder’s words, a “pervasive sense of occupation…it was a war zone…a police state.” Indeed, police searched the group’s rented white van without a warrant on its arrival in St. Paul and seized their homemade shields constructed for the protests.

Unnerved by this illegal bust and inspired by Darby’s militant polemics, Crowder and McKay walked into a Walmart on August 31 and bought provisions to construct Molotov cocktails. Although they proceeded to make eight bottled gasoline bombs, the next morning the two protestors realized, in Mckay’s words, that they “didn’t know what they were doing.” Leaving the Molotovs behind, they joined other protestors in St. Paul only to be arrested soon after for disorderly conduct. Due to lack of identification on his person, Crowder was held in jail.

At this point, the narrative takes its tragic turn. Incensed that Crowder had not been released, McKay foolishly announced to Darby that he was planning to throw his homemade bombs on police cars in a nearby parking lot. His conversation with Darby, held in a moment of hotheadedness, was in fact being transmitted to the FBI through electronic surveillance gear. Although McKay and Darby agreed to meet once more at 2 a.m. to use the Molotovs, McKay decided against this plan and ceased contact with Darby. Nevertheless, several hours later, just before McKay was due to leave for the airport, the FBI arrested him at gunpoint.

When McKay took his case to trial, arguing that he’d walked into an FBI trap, he was facing up to 30 years in federal prison. As his father remarked in a phone conversation prior to his trial, the case was that of “David against Goliath.” An entrapment defense had no precedent of success in the United States. Crowder, in contrast, found himself in a more secure position; he had never conversed with Darby on employing firebombs. The prosecution offered him a two-year plea deal for accepting one charge of possession of unregistered firearms. In the belief that this would exempt him from testifying against McKay, Crowder agreed to these terms.

The two friends nonetheless found themselves pitted against each other as their cases played out. As Better this World critically reveals, when McKay’s trial resulted in a hung jury, the prosecution crawled back to Crowder, effectively blackmailing him for information on McKay. Although the latter still had a chance to prove entrapment, when he was offered a plea-deal of four years in prison, he accepted, thus allowing Darby and the FBI to wash their hands of the case. Faced with the decision to accept four years in prison, or risk 30 in proceeding with a second trial, McKay backed down.

As Crowder explained in an interview on June 23, he and McKay were simply “pawns in somebody else’s game.” A paid FBI informant — once respected for his involvement with Common Ground Relief, the post-Katrina recovery effort — directly influenced their progression to more radical activism. More importantly, the machinery of the U.S. judicial system constrained and shaped their decisions following arrest.

Crowder and McKay’s experience serves as a crucial reminder of broader and more disquieting government trends, such as the tendency to amplify minor offences as cases of “homegrown” domestic terrorism and employ pre-emptive counterterrorism strategies on U.S. soil. “Going on the offense,” as former Attorney General John Ashcroft once dubbed it, has worked to push the boundaries of civil privacy to their limit. Since 9/11, Ashcroft and his successor Michael Mukasey have steadily weakened rights protections and relaxed appropriate checks put in place for FBI investigations. In recent years, the Attorney General Guidelines, first promulgated in 1976 to eradicate the forms of investigative abuse that marked the COINTELPRO program, have markedly eroded. As documented in a study by the Brennan Center for Justice at NYU School of Law, Mukasey’s 2008 guidelines continue to permit the FBI to authorize intrusive surveillance techniques, such as the dissemination of untrained informants, without any factual predicates to suspected criminal conduct.

The relaxation of criteria required to engage in investigative activity has been a recurrent feature of the post-9/11 world. Mukasey’s Guidelines, for instance, allow the FBI to conduct preliminary “assessments” on the activities of individuals or organizations without any prior allegations indicating criminal activity or threats to national security. In these assessment stages that occur prior to preliminary investigations – which themselves can last up to six months! – FBI agents are also permitted to “assess individuals who may have value as human sources,” effectively enabling the premeditated recruitment of informants. Crucially, the Guidelines refrain from imposing “supervisory approval requirements in assessments.”

Taking advantage of this dearth of checks and balances, the U.S. Department of Justice has heretofore brought charges against just over 400 individuals in “terrorism-related investigations,” since 9/11. As noted by David Cole, a professor of law at Georgetown University, this figure is widely regarded as inflated in that it incorporates a vast number of cases that relate to minor offences, such as immigration fraud, rather than actual terrorism.

Brandon Darby’s recognized collaboration with the FBI also hints of a larger reality: government entrapment. As the FBI’s focus, in the counterterrorism context, has steadily shifted to a preventative model, it has increasingly emphasized the use of paid and untrained informants in the “fight against terrorism.” In 2009 alone there were the high-profile cases of Maher Husein Smadi, 19, and Michael Finton, 29, both of whom were convicted on charges of domestic terrorism when their crimes were, in no small part, shaped by the work of FBI informants. FBI agents posing as al-Qaeda members frequently approached Smadi, who was arrested for plotting to bomb a downtown Dallas skyscraper. Undercover U.S. agents also provided inert explosives to Finton, convicted of attempting to bomb the Paul Findley Federal Building and the offices of Congressman Aaron Schock in Illinois.

These cases are only two of hundreds that raise questions about the dividing line between covert operations and government entrapment. Have government informants been given too much leeway? In the eyes of James Weddick, one of several FBI veterans interviewed in Galloway’s film, the answer is yes: “Before 9/11 it was eyes and ears only. Now it’s eyes, ears, and the informant’s mouth.” In recent years, these surveillance techniques have become ominously extreme.

Indeed, one of the more shocking realities Better this World brings to light is the fact that the FBI was preparing for the 2008 RNC at least two years prior to its opening. In the words of one agent interviewed in the film, authorities treated the RNC as a 100% security threat. To that end, the FBI relied on informants in neighboring jurisdictions to track the activities of allegedly threatening activist groups, such as the RNC Welcoming Committee, which coordinated discussions and preparations for the 2008 protests. McKay and Crowder themselves had actually been on the FBI’s radar for more than a year when they travelled to St. Paul. Given the enormous funds spent on RNC security operations, the FBI was under considerable pressure to produce results, to effectively press charges against the alleged terrorists whom they had been tracking.

For those convicted on dubious charges of domestic terrorism, the probability of mounting a successful entrapment defense is slim to nil. According to the Center for Law and Security, from 2001 to 2007, ten defendants charged with “terrorism-related” crimes have formally issued an entrapment defense. None, however, has prevailed. Although Brandon Darby, currently a right-wing political commentator, now refers to Crowder and McKay as “American-hating Americans,” the reality is that the two boys’ progression to militant activism was undeniably influenced by his words and actions. In an effort to “better this world,” a phrase taken from Darby himself, government informants are taking suspects to the edge of the pool and pushing them in.