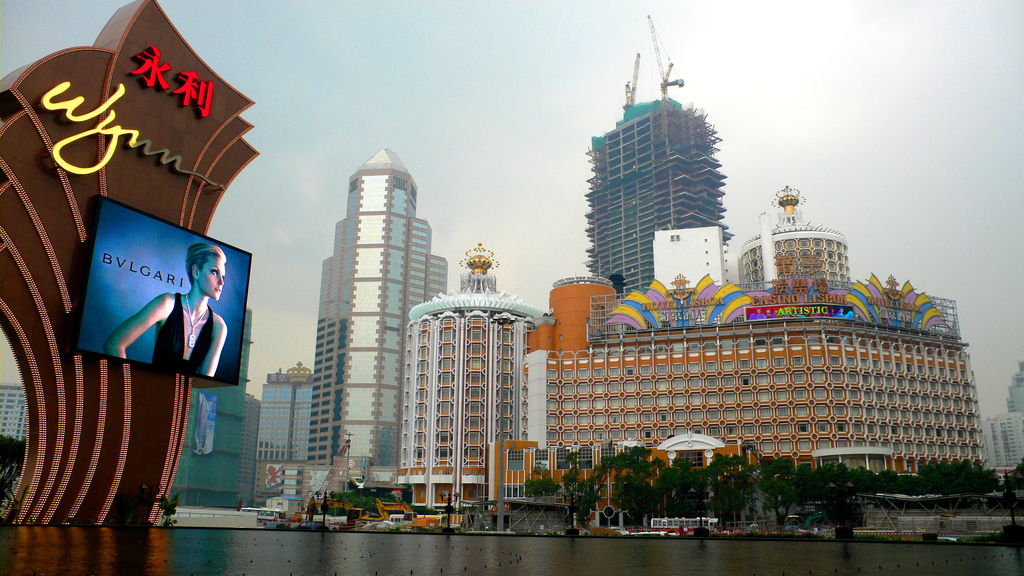 With Macau's economy and workforce increasingly dependent on Chinese gamblers from the mainland, the city finds itself at the mercy of the broader Chinese economy—a situation that may suit Beijing just fine. (Photo: El Freddy / Flickr)

Macau: Gambling Away the Future on China’s Doorstep

The prosperous Chinese region of Macau is gambling away its future on the gaming industry—which may be exactly what Beijing wants.
By Martin Murphy | June 12, 2014

Gambling revenues soared to a new high of $45 billion last year, a whopping 18.6 percent rise over 2012 and the city’s sixth straight year of record earnings. Casinos in this former Portuguese colony, which returned to China in 1999, now earn seven times more than they do in Las Vegas. Casino jobs, which pay 30-40 percent higher than in other sectors, approach a quarter of the labor force. Add in casino-related positions like retailing and hospitality, and about half the working population in this city of 600,000 is connected to the gaming industry. The result is an enviable unemployment rate of 1.8 percent.

So why not let the good times roll?

Macau’s mono-economy of gaming is creating a generation of workers steeped in the monotonous work of baccarat dealing and spinning roulette wheels, but with few of the transferable skills needed in today’s globalized knowledge economy. With the economy and workforce increasingly dependent on Chinese gamblers from the mainland, however, there is little pressure for change—a situation that may suit Beijing just fine.

While Some Hit the Jackpot, Others Pay the Price

It should surprise no one that the city’s gaming boom, which produces 50 percent of its GDP, has spawned a dark side. Prostitution, organized crime, and money laundering are daily affairs. Not so obvious, though, are the multiple stress lines now tearing at a traditional society trying to cope with uncontrolled urban development, loss of green space, rising local gambling addiction, and a general deterioration in the quality of life.

For the average resident, the challenges created by the gaming boom now outweigh its advantages. Poor transportation, worsening air pollution from casino shuttles serving the city’s 29 million visitors, and soaring property prices are just a few of gaming’s by-products. Macau’s small and medium-sized businesses, about 95 percent of its enterprises, also pay a price in rising rents and loss of both staff and customers to the casinos. Adding to this are higher crime rates across almost every category.

Despite all the downsides, Macau’s casino executives and investors, including the big American gaming houses, see unlimited possibilities for further growth and expansion. Their main complaint? A shortage of skilled labor.

With more mega casinos scheduled to open in 2016, Macau will need at least an additional 75,000 casino and hospitality workers, officials say. Given that the city’s small and medium-sized businesses already struggle to compete against higher-paying casinos for limited talent, Macau will have to import not only casino workers, but also professionals from every walk of life.

But neither Macau nor the Chinese government seems to have a plan to deal with the city’s soaring labor deficit, nor is either willing to slam the breaks on what has become a runaway train of unregulated growth.

Worse, Macau is turning its back on policies meant to prepare its future generations for a more globalized, knowledge-driven economy. If trends continue, Macau risks morphing into a society of know-nothings—one whose future could be devoid of educated and skilled professionals, its pool of workers increasingly drawn to easy money in the often mind-numbing work on casino floors.

Every few months new reports present dire warnings. In December last year, one survey showed that nearly half of businesses polled “found difficulties in recruiting IT professionals” and predicted the shortage “could further worsen.” Last April, an industry report cited the lack of accountancy professionals, with “only fractional increases” since 2007. Another complained of the city’s “lack of engineers and related professions.” All this points to a society at the breaking point, one that is mortgaging its future generations for short-term gains.

Even Macau’s lawmakers now complain that the boom has been building castles in the sand. Last year, legislator Jose Coutinho told the media, “Macau is a complete illusion of prosperity, because what we are building is only casinos, rooms, and some shops with famous brands.” But he and other critics hold a minority view in a legislature where 12 of the 33 members are indirectly elected by industry bodies and another seven are appointed by Macau’s Beijing-selected chief executive.

Betting It All on Gaming

While Macau officials pay occasional lip service to the need to rebalance the economy and have floated a number of proposals, none so far have the transformative effect needed to set the city off in new directions.

One of the most talked about proposals recommends that Macau capture more of the region’s “meetings, incentives, conferences, and exhibitions,” or MICE. But this has been slow to take off and relies disproportionately on the gaming sector. For example, Macau’s biggest trade show is the Global Gaming Expo Asia. A plan to develop nearby Hengqin Island as a free trade zone will also do little to help the majority of Macau’s small businesses, given its emphasis on large-scale projects.

But the main obstacle to a more sustainable economic model is that Macau continues to grow fat on Chinese gambling, and Chinese leaders still see Macau as an important outlet for the country’s wealthy and middle class. The result is that no one in authority is even contemplating the day when China’s economy slows, the gamblers stop coming, and the boom ends, even though history has shown that the bigger the boom in a mono-economy, the greater the potential for a crash.

While China says it wants to see Macau rebalance its economy, Beijing’s reluctance to impose policy prescriptions or offer inducements to help it diversify is not surprising.

That’s because Macau may be right where Beijing wants it and China’s other peripheral regions to be—societies increasingly dependent on the mainland for their prosperity and therefore less willing to make annoying demands for such things as democracy and greater autonomy.

Martin Murphy is a former U.S. diplomat. He was head of the Economic-Political Section at the U.S. Consulate in Hong Kong and Macau from 2009-2012. He can be found at www.hongkongreporting.com.