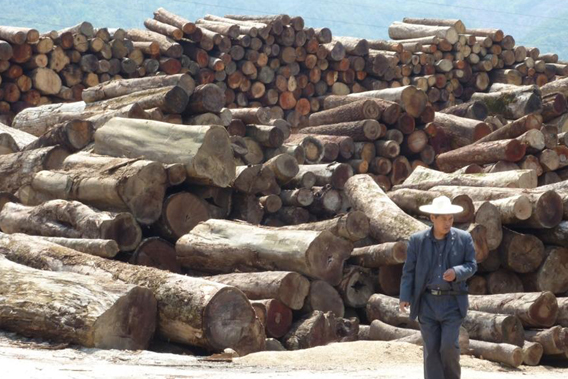 Although known for decades for its oppressive behavior, Myanmar's government is capable of very little when it comes to conserving natural resources, promoting development, and protecting citizens.
By Billy Tea | July 30, 2013 On May 20, 2013, former general Thein Sein became the first Burmese president to visit the White House in almost 50 years. From a pariah state noted for human rights violations under its brutal military regime, Myanmar turned a corner in 2010-2011 with the release of high-profile political prisoner Aung San Suu Kyi and the installation of an elected civilian government. In a gesture of respect to mark these changes, President Barack Obama became the first American president to refer to the Asian country by its official name, Myanmar, rather than its oft-used name Burma.

During his speech, President Obama praised Thein Sein for taking steps toward instituting a democratic government. “We’ve seen credible elections and a legislature that is continuing to make strides in more inclusivity and greater representation of all the various ethnic groups in Myanmar,” he said. Obama acknowledged, however, that even Thein Sein would concede that his country has taken but the first steps on what will be a “long journey,” and that “there is still much work to be done.”

The work to be done includes resolving sectarian violence and human rights violations. Much of President Obama’s speech addressed the intense violence against Rohingya Muslims in Rakhine state. There, beginning in June 2012, Buddhists and Muslims have been locked in a conflict, resulting in nearly 200 mainly Rohingya deaths. About 140,000 have been displaced, with refugees fleeing to Bangladesh, Indonesia, Malaysia, and Thailand. As a result of years of repression and discrimination, including having been denied citizenship, many Rohingya remain stateless, leaving them especially vulnerable to attacks. Obama noted that inter-communal violence has now spread to other Muslim-inhabited areas of the country.

This complex situation will demand strong negotiations between the government, the opposition factions, and the military. The new Myanmar government must take immediate steps to minimize, if not eliminate, the violence. It also needs to work toward establishing a mechanism that can manage inter-communal conflict as well as all illegal activities. All of these present great challenges for Myanmar’s fledgling democracy due to the low capacity of its state institutions, and the unavailability of properly trained personnel to manage the conflict.

There are economic overtones to the violence, given that some ethnic Burmese complain that ethnic minorities are taking the country’s wealth from “citizens.” Therefore, Myanmar should carefully promote economic development in order to increase social stability in the immediate and long term. As it creates the necessary infrastructure and institutions to manage the conflict, the country can simultaneously develop its capacity to respond to the economic insecurities at the root of violence.

Myanmar still suffers from the rampant trafficking of opium, wood, minerals, and people. In 2012, the United Nations ranked Myanmar—where an estimated 256,000 households participate in the cultivation of opium, which is distributed by more than 50 drug-trafficking organizations—as the world’s second-largest producer of illicit opium. Opium from Myanmar often enters the markets of neighboring countries such as Thailand, Laos, and China. In 2011, police in the Chinese border province of Yunnan seized 13.5 tons of illegal drugs and arrested some 17,000 drug smugglers, many with connections to Myanmar.

Similarly, the participation of corrupt officials and businessmen in the illegal wood trade demonstrates the adverse consequences of underdeveloped infrastructure and governance. Environmental groups assert that Myanmar has Asia’s most extensive intact tropical forest ecosystems and possesses the world’s only remaining golden teak forests. Yet Myanmar is also the largest exporter of timber in Indochina, with teak accounting for 60-70 percent of export earnings from forestry products and generating $309.6 million in revenues in fiscal year 2011-2012 alone. Illegal deforestation has reduced the amount of land covered by timber from 57 percent in 1990 to 47 percent in 2005. The environmental advocacy group Global Witness warned in a 2009 report that illegal logging was causing the rapid destruction of Myanmar’s northeastern forests, with most of the timber being smuggled into China’s Kunming province in 2008. In 2005, according to the report, one truck carrying 15 tons of illegal logs crossed the China-Myanmar border every seven minutes.

Meanwhile, human trafficking adversely affects Myanmar’s society at every level. Men, women, and children from Myanmar are trafficked for sexual and labor exploitation in Thailand, China, Malaysia, Bangladesh, South Korea, Macau, and Pakistan. Myanmar is both a source and a transit country for human trafficking. There are no reliable estimates on the number of persons trafficked annually, although a total of 134 trafficking cases were investigated in 2008 involving 203 victims (153 female and 50 male) and 342 traffickers. Fifteen cases were of internal trafficking, and there are likely to be additional, unreported cases in remote areas. Identified cases surely represent only a small fraction of the actual incidents of trafficking, betraying the enormity of the scale of the problem. UNICEF, for example, estimated in 2003 that 10,000 girls were trafficked every year from Myanmar into Thai brothels alone.

These illegal activities are symptomatic of state capacity deficiencies. Myanmar has weak law enforcement agencies and patchy cooperation among member states; insufficient institutional and procedural safeguards against corruption and a lack of cooperation in recovery of stolen public assets; and lacks a strong, independent, and fair justice system at the national level. It also has inadequate mechanisms to support effective cooperation in addressing transnational organized justice.

Myanmar’s weak institutions enable illegal markets to flourish, with criminal activity quickly becoming a regional crisis. Myanmar’s overall development is unlikely to proceed unless these illegal markets can be contained. A judicious government effort to contain this activity would legitimize the government’s authority, increase popular support for democratic reforms, and promote social stability.

Once the wealthiest Southeast Asian country of the British Empire, Myanmar has declined so severely in economic well-being that the United Nations named it a Least Developed Country in 1987. Much of this decline is due to the failed economic policies of the junta, in power from 1962 to 2011.

During that period, Myanmar’s illegal economy became three to five times larger than its legal economy. Years of mismanagement established a network of crony officials and businessmen that still illegally traffic Myanmar’s natural wealth. The country’s weak capacity promotes the continuation of the old ways and provides a haven for non-state actors to pursue their illegal activities in the country, thereby restraining its transition toward normalization.

One of the main issues that Myanmar will encounter in its pursuit of democracy is the lack of institutions and personnel to adequately address day-to-day issues while implementing decisions issued by an elected president. The lack of middle management forces ministers to attend 10-20 meetings each day, leaving time for little else. Consequently, new reforms are implemented slowly and imperfectly. Moreover, nonexistent infrastructure—such as strong legal, judicial, and tax systems—severely hinders the state’s capability to respond to and properly prosecute illegal activities.

Myanmar should seek expertise from the United Nations, the OSCE, and the European Union in developing middle management. These organizations have a strong and instructive collective history in conflict resolution as seen, for example, in the stability restored after the Yugoslavian wars of the 1990s. In responding to illegal markets, the authorities should also receive training from Interpol and Europol on their information sharing institutions at the domestic and regional level.

Moreover, it is imperative that the emerging private sector promote and respect these new institutions to fight the illegal markets. Together, these actions could bring economic development and security along with democracy.