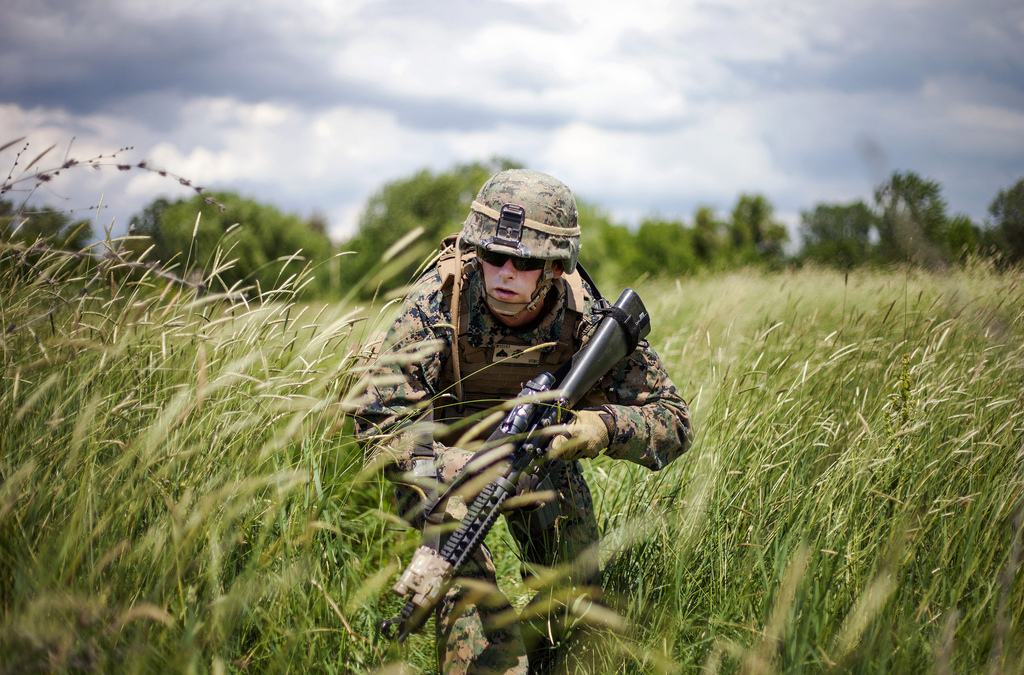 A U.S. Marine with Black Sea Rotational Force 13 drills in Romania, Eastern Europe. While events in Ukraine appear to be closing in on a political solution, potential for miscalculation and military escalation among Ukraine, Russia, and NATO abounds. (Photo: Marines / Flickr)

Events appear to be moving toward a political solution to the East-West standoff over Ukraine. But as Clausewitz once noted: “Against stupidity, no amount of planning will prevail.”
By Conn Hallinan | June 3, 2014

So why are the United States, the European Union (EU), and the North Atlantic Treaty Organization (NATO) all on the road to the Russian capital? And exactly what are they hoping to achieve?

As in all battlefields on the Eastern Front, complexities abound.

For beginners, the multiple armies marching eastward are not exactly on the same page. This sort of “divided command” (to use the military term) generally ends in debacle. Add to that the fact that many of the weapons are of such dubious quality that they might end up backfiring. And to top it all off, as in all great crises there’s a cost—in this case the sticker price may give even fire breathers pause.

That’s not to say that these aggressors are amateurs—to the contrary, professional armies are involved. NATO has deployed troops, aircraft, and naval forces in the region, and the Russians have parked 40,000 troops on Ukraine’s eastern border.

So far, bloodshed has been minimal. With the exception of the horrendous deaths of over 40 demonstrators in Odessa and dozens of separatist fighters killed in clashes over Donetsk’s airport, the crisis has been a remarkably calm affair. The Russians took over Crimea virtually without a shot, and while a worrisome increase of violent incidents has occurred in the south and east, they hardly measure up to the French and German invasions in 1812 and 1941, respectively.

But that doesn’t mean things couldn’t turn dangerous. Which is why it’s important to know the agendas of the players involved.

What Could They Possibly Be Thinking?

The Russians have their eyes on national interest and security—and remedying the broken promises and missed opportunities that accompanied German reunification in 1990. At the time, Western powers promised they would not drive NATO eastward. Instead, they vacuumed up members of the old Soviet Warsaw Pact and recruited former Soviet republics into a military alliance specifically created to confront Russia.

Misrepresentations of the situation abound. Putin is not trying to recreate the old Soviet Empire, as some Western news sources have suggested. Meanwhile, although the overthrow of Ukrainian president Viktor Yanukovych was certainly a coup—what else do you call an armed uprising that causes an elected president to flee? — it wasn’t just ex-Nazis and fascists who caused it, as some Russian officials have claimed. The revolt reflected genuine mass anger at corruption in the Yanukovych government.

Nonetheless, two of the groups that spearheaded the coup—and who currently control seven ministries in the Western Ukraine government—openly admire those who fought with Waffen-SS divisions during World War II. The Germans killed some 25 million Russians during that war—so if the Russians today act a bit cranky about people who hold celebrations honoring the vilest divisions of an evil army, one can hardly fault them.

The Americans and the Europeans, for their parts, have long had their eye on Ukraine, though their interests diverge due to their differing economic relations with Russia.

The EU gets 30 percent of its energy needs from Russia; for countries like Finland and Slovakia, that figure climbs to 100 percent. The EU had $370 billion in trade with Russia in 2012, compared to a modest $26 billion for the United States. Moreover, several large European energy giants, including BP, Austria’s OMV, ENI, Royal Dutch Shell, and Norway’s Statoil, are heavily invested in Russian gas and oil. All told, its oil and gas combined make Russia the largest energy exporter in the world.

For Europe, Russia also provides a growing consumer market of 144 million people, with retail spending growing 20 percent a year between 2000 and 2012.

The Americans aim to expand NATO and open up a market of 46 million people in the heart of Eastern Europe. For that, they need to get the 28 members of the NATO alliance to finally pull their own weight. The United States currently foots 75 percent of NATO’s bills, and is caught between a shrinking military budget at home and a strategy of expanding the United States’ military presence in Asia, the so-called Asian “pivot.” NATO members are supposed to spend 2 percent of their Gross Domestic Product on the military, but very few countries—Britain, Estonia, and Greece among them—actually clear that bar. Nor is there any groundswell to do so in European economies still plagued with low growth and high unemployment. In other words: Yes, get the Russkies, but not at our expense.

At least in its rhetoric, NATO is pushing hard. U.S. general and NATO commander Gen. Phillip Breedlove recently called for beefing up NATO forces on the Russian border. But for all the talk about a new Russian threat, NATO is not going to war over Ukraine, anymore than it did over Georgia in 2008. A few neoconservatives and hawks, like U.S. Senator John McCain, might make noises about intervention, but it will be a very lonely venture if they try.

An alternative to a military approach is sanctions, and these have received lots of attention. Understanding their potential requires coming to grips both with Russia’s standing, and also the appetite for these measures in the rest of the world.

Russia, the world’s eighth largest economy, is well integrated into the global economic system, particularly in Asia through the Shanghai Cooperation Council. The Council includes not only Russia and China, but also most Central Asian countries, with observer status from Iran, Pakistan, and India.

The emerging BRICS countries—Brazil, India, China, and South Africa (Russia makes up the “R”)—did not support the recent UN resolution condemning Moscow’s annexation of Crimea and would certainly not join any sanctions regime. In fact, the Russians and Chinese recently inked a 30-year, $400-billion gas deal, and bilateral trade between the two countries is set to reach $100 billion by 2015 and $200 billion by 2020. Russia and Iran are reportedly negotiating a $10-billion energy deal as well.

So far, sanctions have targeted individuals, although Washington and the EU have threatened to up the ante and ban Russia from using the Swift system of international banking. That would make transferring money very difficult. It has certainly crippled Iran’s finances. But Swift, as Gideon Rachman of the Financial Times points out, is a double-edged sword. “Cutting Russia out of Swift would cause chaos in Moscow in the short term,” but in the long term “it might hasten the day when Russia, and more significantly, China, establish alternative systems for moving money between international banks.” According to Rachman, China and Russia have already discussed such a system.

The EU’s army is all for rhetorical condemnation of Russia. But when it comes to increasing sanctions, its command is divided. Those countries with significant investments in Russia—Italy, Germany, Spain, Austria, and Greece—oppose cranking up the sanctions. In fact, isolating Russia runs against the interests of some very powerful businesses in Europe—and a few in the United States as well, such as Chevron, ConocoPhillips, and ExxonMobil. German Chancellor Angela Merkel must juggle her desire to support the United States with polls showing that the average German really doesn’t want to march east. As the saying goes, the Germans have been there, done that.

“Sanctions will not help anybody; they would not just hurt Russia, but also Germany and Europe as a whole,” says Rainer Seele, chair of Wintershell, an energy company owned by the German chemical giant BASF.

The Swedes and the Poles are fire-breathers, but their stance is as much about trying to offset German power in the EU as for any concern over Ukrainians.

In short, the EU looks like one of those combined armies of Austrian-Hungarians, Russians, and Prussians that Napoleon made his reputation beating up on.

Ways Out of the Mess

In the end, the solution must be diplomatic. It has to take into account Russia’s legitimate security interests and recognize that Ukraine is neither Russian nor Western European, but a country divided, dependent on both. The simplest way to deal with that would be through a system of federal states. It is the height of hypocrisy for the United States to oppose such a power arrangement when its own system is based on the same formula (as are many other countries in Europe, including Germany).

Polls show that Ukrainians in the east and south do not trust the Kiev government, but they also show that a solid majority wants a united country. That could shift if the there are major clashes between Kiev’s forces and separatists in the east. Once bodies start piling up, negotiations and compromise tend to vanish, and the possibility of civil war becomes real.

In spite of the tensions, events in Ukraine are moving toward a political resolution. The winner of the May 25 election, Petro Poroshenko, may be willing to compromise. Meanwhile, the Russians are re-deploying those 40,000 troops elsewhere, and Russian Foreign Minister Sergei Lavrov made it clear that “We want Ukraine to be whole within its current borders, but whole with full respect for the regions.” Translation: No NATO.

The dangers here are many: the Kiev government could try to settle the conflict by force of arms; NATO might do something seriously provocative; the Russians may lose their cool. As Karl von Clausewitz once noted: “Against stupidity, no amount of planning will prevail.”

But the ducks are lining up for a political solution to the crisis. Sanctions will not force Russia to compromise its security, and may end up harming the EU and the United States. The commanders of the armies facing Moscow are divided on measures and means. Neither side in the Ukraine is capable of defeating the other. It is time to stop the bombast and cut a deal, particularly since Washington will need Moscow’s help in Iran, Syria, and Afghanistan.

Oh, and marching on Moscow? Really? Monty wasn’t the quickest calf in the pasture but he had that one figured out as a bad idea.