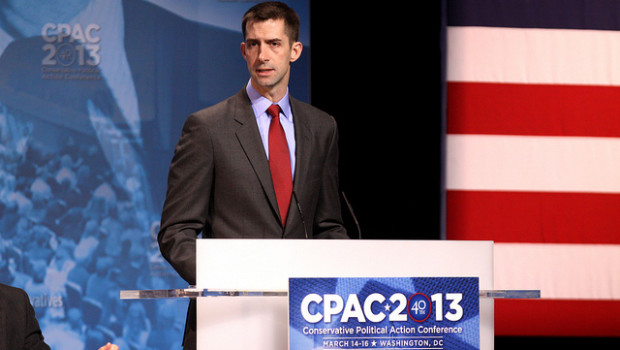 The Message Behind the Senate GOP’s Letter to Iran

It's official: The Republican establishment in Washington has completely delegated its policy on Iran and Israel to its most hardline factions.
By Jim Lobe | March 11, 2015

This commentary is a joint publication of FPIF and TheNation.com. It was originally published by Lobelog.

The story of the day on the Iran front is the publication of what its authors titled “An Open Letter to the Leaders of the Islamic Republic of Iran.”

It was signed by 47 Republican senators led by freshman Arkansas Sen. Tom Cotton, who, as reported by LobeLog, received nearly $1 million in advertising support from Bill Kristol’s Emergency Committee for Israel in the closing days of last November’s campaign. The basic thrust of the letter is to warn the recipients that once President Barack Obama leaves office, any deal that he and his P5+1 partners may have reached with Iran regarding the latter’s nuclear program could be revoked “with the stroke of a pen.”

There are already lots of arguments breaking out over whether the basis of the letter was an accurate statement of U.S. law.

One prominent Harvard law professor who also served as a top Justice Department official under George W. Bush, Jack Goldsmith, called at least one of the letter’s assertions about the ratification process “embarrassing.”It was especially embarrassing not only because Cotton graduated from Harvard Law School, but also because Iranian Foreign Minister Javad Zarif, who earned a M.A. and PhD in international law at the Josef Korbel School of International Studies at the University of Denver — Condoleezza Rice’s alma mater — felt compelled to correct Cotton’s understanding of Washington’s international legal obligations.

There is also a dispute over whether the letter constitutes a violation of the Logan Act, which provides:

For those who might claim that the letter is protected by the First Amendment, it’s interesting to note that when he was serving in the U.S. Army after law school in 2006, Cotton wrote another “open letter” published by the far-right website Power Line calling for the prosecution and imprisonment of three New York Times reporters for allegedly violating the Espionage Act by disclosing how the government was tracking terrorist financing.

I’ll leave the legal analysis to the specialists, but the political implications of this truly remarkable effort to undermine the duly elected president of the United States and sabotage an international negotiation in which our closest NATO allies are also deeply invested need to be digested and understood. This is a clarifying moment and one which Obama himself made abundantly clear when he said that “it’s somewhat ironic to see some members for Congress wanting to make common cause with the hard-liners in Iran. It’s an unusual coalition.”

For those who follow Iran policy closely, this observation comes as no surprise. The Republican senators who signed that letter are desperate to block any agreement with Iran, just as hard-liners in Iran have long opposed anything that could lead to détente with the “Great Satan.” It’s not that they want a “much better agreement” with Tehran, as Benjamin Netanyahu insisted in his address to Congress. They want no agreement.

Indeed, it was Cotton himself who made this, as I put it, “Kristol clear” in a speech to the Heritage Foundation in mid-January:

The United States must cease all appeasement, conciliation, and concessions towards Iran, starting with the sham nuclear negotiations. Certain voices call for congressional restraint, urging Congress not to act now lest Iran walk away from the negotiating table, undermining the fabled yet always absent moderates in Iran. But, the end of these negotiations isn’t an unintended consequence of Congressional action, it is very much an intended consequence. A feature, not a bug, so to speak.

And let’s please remember that veteran neoconservative activist Bill Kristol was up there in the same section of the House gallery where Netanyahu spoke as Bibi’s spouse Sara Netanyahu, Alan Dershowitz, Elie Wiesel, and, of course, multi-billionaire casino magnate and staunch Bibi-backer, Sheldon Adelson, who spent at least $150 million for Republican candidates in the 2012 election cycle.

Given ECI’s support for Cotton in the 2014 Senate race, it’s hard to imagine that Netanyahu and his Republican ambassador here, Ron Dermer, would not have approved of this latest initiative to sabotage prospects for an Iran deal.

So let’s be clear: All the commentary and Israeli spin in the Times and elsewhere suggesting that Bibi’s speech had subtly signaled an openness to an agreement with Iran that settles for less than the total dismantling of its nuclear program, including its enrichment capabilities, is — to put it bluntly — bullshit.

For Netanyahu, Kristol, and Adelson, no deal is better than any deal because an agreement between Washington and Tehran could begin a process of rapprochement. And anyone — like Sen. Bob Corker (who, to his credit, did not sign the Cotton letter) or Robert Menendez — who says otherwise is either lying or deluding themselves. Cotton’s letter — and the fact that he spearheaded this effort — makes that abundantly clear.

Certainly, the Democratic leadership is holding up Cotton’s initiative as evidence of bad faith. Calling the letter “juvenile,” Minority Leader Harry Reid accused the Republicans of “undermining our commander in chief while empowering the Ayatollahs.”

He also rightly noted that the letter constituted a “hard slap in the face of not only United States but also our allies” — a point that, in my opinion, has not received nearly enough attention. I’m sure the leaders of Britain, France, and Germany greatly appreciated the Republican warning that their own efforts to achieve a peaceful settlement to Iran’s nuclear program have been a waste of time because the president of the United States can’t really negotiate an agreement with them on behalf of his country.

The Democrats’ number two, Sen. Dick Durbin, warned that Republicans “should think twice about whether their political stunt is worth the threat of another war in the Middle East,” while the ranking member of the Senate Intelligence Committee, Dianne Feinstein, was quite direct in her assessment of the letter:

I am appalled at the latest step of 47 Republicans to blow up a major effort by our country and the world powers to negotiate a peaceful resolution to the Iranian nuclear program.

This is a highly inappropriate and unprecedented incursion into the president’s prerogative to conduct foreign affairs and is not befitting this chamber. This letter only serves one purpose — to destroy an ongoing negotiation to reach a diplomatic agreement in its closing days.

All of this should result in a major reality check by Democrats and the dwindling number of relatively reasonable Republicans who remain in Congress.

Perhaps this will prompt Corker to reassess the problematic provisions that he and Menendez (who will now be preoccupied with defending himself against anticipated federal corruption charges) have included in the legislation they crafted to ensure congressional review of any comprehensive deal with Iran. In any event, this really brazen and exclusively partisan effort to undermine presidential authority will almost certainly solidify Democratic support for a veto, if one is needed, of any legislation designed to sabotage the negotiation.

A Rift in the Israel Lobby

This episode is also likely to create even deeper divisions within the Israel lobby, particularly between mainstream groups like the American Jewish Committee, the Anti-Defamation League, and even the American Israel Public Affairs Committee (AIPAC), which are finding it ever more difficult to retain their bipartisan image and who were, apparently as a result, kept in the dark about House Speaker John Boehner’s invitation to Bibi — about which they were clearly unhappy.

Cotton’s initiative was an exclusively Republican affair, which, like Boehner’s invite, puts these groups in a very difficult position. This marks an intensification of the tensions generated by AIPAC’s decision a year ago to suspend its lobbying for the Kirk-Menendez sanctions bill after it ran into a brick wall of Democratic opposition in the Senate.

That decision drew scorn from Kristol’s ECI, Adelson’s Republican Jewish Coalition, and the far-right Zionist Organization of America (ZOA), which receives substantial support from Adelson. As Kristol himself wrote at the time:

It would be nice if there were universal bipartisan support for acting now to stop a nuclear Iran. But there apparently is not. And it would be terrible if history’s judgment on the pro-Israel community was that it made a fetish of bipartisanship — and got a nuclear Iran.

As this latest maneuver shows, this coalition of right-wing groups, clearly backed by Netanyahu and Dermer and fueled by the largess of Adelson and other RJC billionaires, has essentially taken over the Republican Party’s leadership, at least as it pertains to U.S. policy in the Middle East. Even Rand Paul signed the letter.

As a result, they’ve become by far the most aggressive force in “pro-Israel” activity in Washington, leaving to AIPAC, the ADL, and the AJC the increasingly difficult task of reassuring increasingly alienated Democrats that supporting an Israel headed by the likes of Bibi Netanyahu is somehow consistent with their values and the national interest. This also means that long-faithful congressional champions of AIPAC who pride themselves on working “across the aisle” — notably Illinois Republican Sen. Mark Kirk and New Jersey Democrat Robert Menendez — have found themselves playing second or third fiddle to upstart and ultra-partisan extremists like Cotton and Ted Cruz.

As a result of changes in election laws, we don’t know which specific donors provided ECI with that $960,000 that was then passed along to a pro-Cotton ad campaign in the closing days of the election last November, but the choice of ECI — and the obviously tight relationship between ECI and the Republican Jewish Coalition — as the conduit suggests that it came from people who think very highly of Bibi Netanyahu.

We do know, however, the identity of one important source of direct financing for Cotton’s campaign. According to the Center for Responsive Politics’ Open Secrets website, the second biggest donor to his campaign was Elliott Management, a hedge fund headed by billionaire Paul Singer. While the Club for Growth provided more than half a million dollars to Cotton’s campaign, Elliott supplied $143,100 — about 50 percent more than the Senate Conservatives Fund and four times as much as Koch Industries.

Singer sits on the RJC board and has contributed to such hard-line neoconservative organizations as the Foundation for Defense of Democracies, the Jewish Institute for National Security Affairs, and the American Enterprise Institute — all of which, consistent with Netanyahu, have denounced negotiations — let alone any deal with Iran.