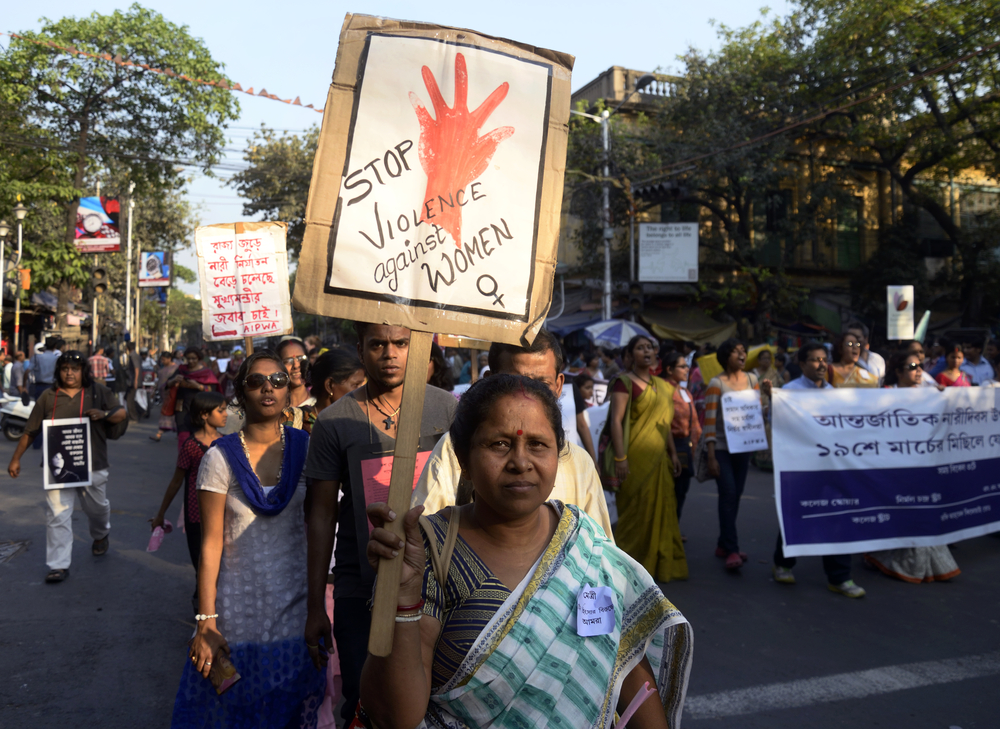 The U.S. isn't the only country where women are lining up to burn down the (frat) house.
By John Feffer | September 26, 2018

The famous tenor Enrico Caruso went on trial in 1906 for an incident at the monkey house in Central Park. He was accused of the indecent assault of 30-year-old Hannah Graham. Caruso in turn accused one of the monkeys of pinching the victim’s rear end. Other accusations of sexual harassment emerged at the trial. The newspapers called the singer “an Italian pervert.” He was found guilty and fined $10.

There were rumors that the Monkey House incident was a set up, largely because the arresting police officer and Ms. Graham knew each other. But that wasn’t the whole story either. New Yorker writer A. J. Liebling supplies the coda: “Thirty years later I was to learn that it was a press agent’s trick, put up to attract attention to the tenor’s appearance in a new role, Rodolfo in La Boheme.”

Though several generations separate the two men, it’s not difficult to draw a line connecting Caruso and Donald Trump, both of them entertainers, both of them believing that a hint of sexual aggression enhanced their reputations. Caruso let others do the dirty work while Trump pretended to be his own press agent and later amplified his boasts on the Howard Stern show. It’s remarkable — and infuriating — that this frat-house sensibility has survived the rise of feminism, the transformation of the workplace, and the reshaping of culture.

Then came the Access Hollywood tape, in which Donald Trump revealed his Viking mindset to host Billy Bush. The conversation took place in 2005, but it wasn’t released until October 7, 2016. Trump’s behavior toward women wasn’t well publicized at that point, despite a 1997 suit for nonviolent sexual harassment, a rape charge (later retracted) by former wife Ivana Trump, and a detailed New York Times article the previous spring. News of the tape spread to every corner of the globe. It should have been the final nail in Trump’s electoral coffin.

Instead, Trump lied, apologized, and bluffed his way through the crisis. He won the election, with an astounding number of people giving the candidate a pass for his multiple transgressions. It looked as though Trump, like Caruso more than 100 years before, emerged from the scandal unscathed and, in some people’s eyes, stronger because of it.

Ah, but not quite.

Trump’s atrocious conduct encouraged 19 women to step forward and tell their own stories of what the businessman did to them. The women’s marches, the determination of more women to run for political office, the more widespread discussion of sexual harassment: all of this followed Trump’s upset victory. It culminated one year after the tape came out with the fall of Harvey Weinstein and an outpouring of stories from women (and a few men) who experienced sexual harassment or worse.

The #MeToo movement did what decades of liberal handwringing had failed to do: dislodge a good number of powerful men on the basis of their woeful (and in some cases criminal) misconduct: Matt Lauer, Kevin Spacey, Charlie Rose, Mario Batali, and many more.

Of course, there have been limitations to the movement. It could have happened a decade earlier, when African American activist Tarana Burke created basically the same project with the same name. It could address race and class more squarely. It could embrace a larger and more systemic critique. But still, this is how sea changes begin.

Such a change won’t happen overnight, and certainly not with Donald Trump still president. He even believes that he can run for reelection. And, of course, he has no compunction about nominating another representative of frat culture, Brett Kavanaugh, to the Supreme Court.

If the Access Hollywood tape represented the beginning of the end of this frat culture, perhaps this confirmation battle will mark the end of the beginning, a powerful sign that the #MeToo movement is making concrete changes in power relations in U.S. society. Congress nodded in 1991 when it confirmed Clarence Thomas to replace Thurgood Marshall on the Supreme Court despite Anita Hill’s courageous testimony. Today, it has a chance to prove that it has woken up.

But, of course, the sea change is not just about the United States.

It’s thrilling when social movements in the United States spread globally and intersect with comparable activism in other countries. This has been the case for the U.S. civil rights movement as well as the more recent Black Lives Matter movement.

#MeToo is less than a year old, but it has spread very quickly. Indeed, the hashtag generated its equivalent in several other languages within a few hours of actress Alyssa Milano’s tweet urging women to tell their stories. The hashtag is now being used in at least 85 countries. Most of the hashtags are just translations of “me too,” but there are several interesting variations: #exposeyourpig (France), #thetimethat (Italy), and #whenthemusicquiets (Norway).

Numerous high-profile truth-telling episodes have taken place. In Japan, journalist Shiori Ito revealed her own story of rape, which is making it possible for Japanese women finally to end the cultural conspiracy of silence around violence against women. In the UK, a series of accusations have upended Westminster, and an internal report earlier this year indicated that one in five people working in the government had experienced sexual harassment in the past 12 months. In Brazil, the movement had a head start when the Portuguese version of #Myfirstharrassment drew enormous media attention in 2015 and spread throughout Latin America.

Because of widespread rape and sex trafficking, India is the most dangerous place in the world to be a woman, according to a recent Thomson Reuters Foundation ranking. Rapes of children have reached epidemic proportions, doubling between 2012 and 2016. But women have been organizing and protesting against these crimes as well as against the sexual harassment that goes under the misleadingly benign label of “eve-teasing.” In a country where only one-quarter of the population uses the Internet, a hashtag movement can only go so far.

There has been, inevitably, backlash. Some have decried the imposition of “American” attitudes. “I wish it hadn’t started in the U.S.,” Anne Marie Goetz, a professor of global affairs at New York University and a former United Nations adviser on women’s issues, told NBC. “The fastest way to discredit any women’s rights struggle is to say it comes from somewhere else.”

It’s not just feudalistic societies led by men that have pushed back against the spread of #MeToo. In France, a hundred prominent women including actress Catherine Deneuve published an open letter in Le Monde claiming that #MeToo had gone too far, that it represented the puritanical and censorious attitudes typical of Americans.

There is certainly a puritanical and censorious strain in American culture — remember, a quarter of the population is evangelical Protestant — but the #Metoo movement is not about sex.

Much has changed in social attitudes, worldwide, about male-female relations. There is greater equality, but there are still gaps. For instance in the United States, women earn only 82 percent of what men earn in comparable jobs. And there is still a gap in who occupies powerful positions.

If you look at the graph of the proportion of women in parliament around the world, it’s a reassuring arrow heading off the chart at a 90-degree angle. There’s been steady improvement since 1997 when the level stood at 11 percent. In 2017, the figure had improved to 23 percent. It’s not gender parity, but it’s definitely progress.

The global figure is also a bit better than what women have achieved in the United States: 20 percent of Congress in 2018. There’s a good chance that #MeToo plus #NotMyPresident will combine to push those numbers up after the midterm elections so that the United States can be average rather than low-performing.

In only two countries in the world do more women than men serve in parliament: Rwanda (61 percent) and Bolivia (53 percent). Cuba and Iceland come close at 49 percent and 48 percent respectively. At 3 percent or under, the Pacific islands (Vanuatu, Micronesia, Solomon Islands) and the Gulf States (Qatar, Oman, Kuwait) have a long way to go.

In the judiciary, women do a bit better, at least in the wealthier nations. According to Organization of Economic Cooperation and Development figures, 54 percent of professional judges in OECD member countries are women, with Slovenia, Latvia, and Greece leading the pack. Approximately one out of three Supreme Court justices are women.

It’s not that I think women naturally do a better job as politicians or judges. But I do think that gender parity ensures that people in power don’t slight women’s concerns. And, if the women are feminists, then they bring with them a different conception of power — power with rather than power over. And that can generate institution-wide change.

I went to a liberal Quaker college back in the 1980s. It had become a co-ed institution the year before I arrived. I chose the school in part because it didn’t have fraternities. I was naïve enough to believe that the absence of frats meant the absence of frat-house behavior.

During that first year of co-education, a young woman was gang-raped in a dorm. The college administration did a very poor job of dealing with the issue. The young woman dropped out; the perpetrators had their hands slapped. The college tried to pretend the incident never happened. After all, such a thing shouldn’t happen at such a liberal, tolerant place.

Over the last 50 years, the women’s movement has scored many, many victories. Women in large numbers have entered universities, workplaces, and political office. They have broken through many glass ceilings. Quite a few old boy’s clubs have been opened up and aired out.

Many men have not adjusted well to these changes. Their workplaces are no longer all-male, but they have persisted with their frat-house mentality. Often the men at the top establish the pattern. Just like non-human primates, men will take their cues from the alpha male. The laws have changed, the explicit rules are non-sexist, but some attitudes harken back to earlier times.

It’s the responsibility of institutions to sanction frat-house behavior, establish safe and dignified work environments, and send a different set of messages about how people with power should act. My college failed to do that when it became coeducational. It took a great deal of protest and organizing by students to turn that around. As with human rights abuses around the world, it required naming and shaming.

The same kind of protest and organizing — by #MeToo and many others — is needed now to block the alpha male in the White House and his attempt to bring fraternity rules back to the center of American society. He’s big man on campus now, just like Bill Cosby once was.

But soon, I hope to see him expelled and stripped of his honors. And the frat-house mentality that still lurks in various pockets of American culture destroyed once and for all.