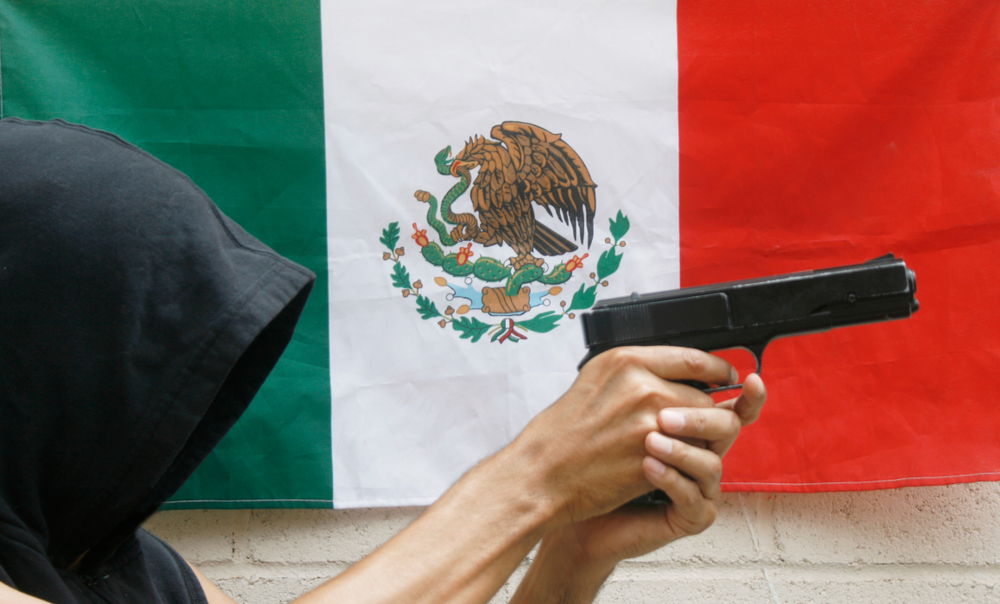 American guns are not just a problem in the United States.
By Louis Epstein | January 29, 2019

Americans might think of Acapulco as a tropical idyll but it’s increasingly something different: a homicide capital. U.S. weapons, sold to Mexican law enforcement authorities ostensibly to help combat criminals, are instead fueling violence, torture, disappearances, and massacres.

A new investigation by the Mexican Commission for the Defense and Promotion of Human Rights (CMDPDH), a UN-funded human rights watchdog, has found that American guns sold to the Mexican army are disappearing from armories and being reported lost or stolen. I spent four months in Mexico working with the commission’s investigative team, and we concluded that as many as 20 percent of the guns sold in some Mexican states—more than 20,000 over the past decade—have gone missing.

Mexican authorities have trouble keeping track of the guns they buy. No fewer than 342 disappeared from Acapulco’s police armory before the September raids. It’s impossible to know what these guns have since been used for, but the investigation found that more than 1,400 unmarked graves have been unearthed across Mexico since 2007. These pits held the remains of almost 2,000 victims, some in mass graves with more 80 bodies. More graves are found every month, and the total number of victims of this violence is likely much higher.

The Mexican military is the only legal importer and vendor of weapons in the country. It buys guns from American companies and then distributes them to police forces and federal agencies. Because gun ownership in Mexico is tightly controlled, most of the guns it resells go to state and local police, who are notoriously corrupt and often collude with or are infiltrated by drug gangs. Either by theft or graft, the 20 percent of weapons that are “lost or stolen” tend to wind up in the hands of criminals.

In effect, then, the United States is fueling the violence in Mexico by providing the guns being used by both criminals and the corrupt police who are failing to stop them. And the Trump administration, eager to sell even more arms, is seeking to weaken the few safeguards that are in place.

The Example of Acapulco

Events in Acapulco show just how out of hand the situation has become. Two of the city’s police commanders were arrested for murder. The situation got so bad that, in September, Mexican soldiers and marines mounted a series of raids to disarm the city’s entire police force.

Sadly, Acapulco is only the latest of more than a dozen cities and towns where Mexico’s federal government has had to step in to dissolve police forces that became instruments of terror. Last year, there were more than 30,000 homicides in Mexico, the highest number ever recorded.

American weapons have been used in some of Mexico’s most gruesome mass murders. In a case that has gripped Mexico since 2014, six students were killed and 43 disappeared after police officers attacked their bus—using Connecticut-made Colt AR 6530 rifles. In another case, police officers in Tanhuato killed five people using Arizona-based Dillon Aero mini-guns mounted on Black Hawk helicopters, built in Stratford, Connecticut. In a third instance in Veracruz, police death squads executed 15 innocent people after buying 674 firearms from Colt, Bushmaster, and Combined Systems.

The Trump administration has proposed what could be a decisive weakening of the already ineffective system by which the United States controls small-arms sales to repressive security forces by shifting responsibility for vetting these sales from the State Department to the Commerce Department. That would move the process from a department with at least a formal commitment to human rights to one whose priority is supporting American businesses. The administration also wants to begin allowing American gun makers to sell semi-automatic weapons without first getting a State Department license. And the administration proposes to reduce oversight of such sales by Congress. Although Congress is now notified of commercial weapons sales worth over $1 million under the Arms Export Control Act, Trump’s proposed changes would stop those notifications.

Senators Ben Cardin (D-MD), Dianne Feinstein (D-CA) and Patrick Leahy (D-VT) have criticized the proposed changes, but the National Rifle Association and gun manufacturers have voiced their support for them. (The Obama administration first proposed these changes, but reversed course after several high-profile mass shootings.)

In June, twelve members of Congress asked the secretaries of state and defense for “a full and public evaluation” of U.S. security aid and arms sales to Mexico, which they said has contributed to “a dramatic increase in human rights violations.” But without widespread concern from the public and the press about the situation in Mexico, these policy changes and the raging violence haven’t been high priorities.

Research has shown that limiting access to guns may reduce violence in Mexico. A study from the University of Massachusetts-Amherst found that homicides rose 60 percent in Mexican municipalities with access to American assault weapons compared to those without it. Cutting off access to a source of guns makes it more difficult for criminal groups to commit violent crimes.

Instead of loosening regulations on these arms sales, the United States should begin tracking and registering the weapons that American companies sell to foreign security forces.

Washington should also begin using an already existing tool: the Leahy Laws. These laws ban the U.S. government from assisting units of foreign security forces when there is “credible evidence” that they have committed torture, extrajudicial killings, or rape. But they have been loosely enforced. From 2010 to 2016, as members of Mexico’s security forces worked with organized criminal groups to torture and execute innocent people, the State Department approved the sale of 6,622 long guns and 4,571 handguns to the Mexican army alone.

The incoming president of Mexico, Andrés Manuel López Obrador, has pledged to change the “failed” security policies of his predecessors. He’s called for UN help to stop corruption and promised to allow an internationally backed truth commission to investigate the disappearance of the 43 students. Considering that the previous Mexican administration covered up brutal murders, this is a step in the right direction.

The United States has more leverage in this situation than you might think. Though Mexico could buy guns elsewhere, no other country can match the United States as a strategic partner. Mexico has received more than $1.3 billion in American training and equipment since 2012, and the United States wields significant influence because of this. Backing López Obrador’s security reforms would send a signal that the United States is getting more serious about human rights in Mexico.

By arming violent and corrupt organizations across the southern border and beyond, America is undermining its own interests and security. Congress has both the power to demand more information about American arms sales to Mexico and the ability to block the Trump administration’s efforts to loosen safeguards. U.S. security and thousands of Mexican lives are at stake.

Louis Epstein, a junior at Brown University’s Watson Institute of International and Public Affairs, recently spent several months working on the investigative team of the Mexican Commission for the Defense and Promotion of Human Rights, a U.N.-affiliated human rights commission.