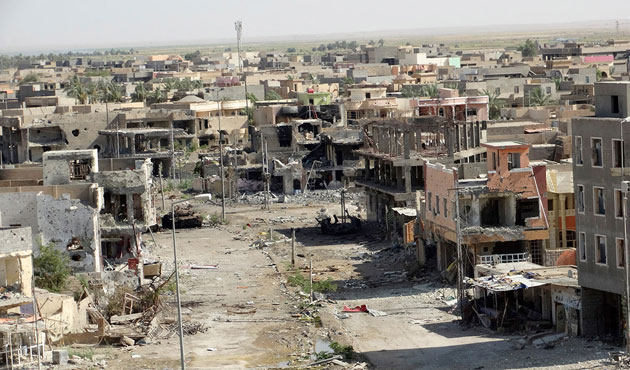 Military Victories Are Counterproductive If They Leave a Political Vacuum

Such a vacuum has enabled the Islamic State to become a magnet for unemployed young men throughout the Middle East and North Africa.
By Rachelle Marshall | February 26, 2016

After World War II the Allies refrained from either punishing Germany and Japan, or letting those shattered countries recover as best they could. Instead the Americans helped restore their former enemies’ economies so they could begin to rebuild. The generous U.S. aid that poured into Western Europe under the Marshall plan turned the region into a lucrative market for American consumer goods and provided reliable allies against the Soviet Union. The Germans in turn acknowledged the damage they had done under the Nazis and paid restitution to the survivors.

Similarly, the American occupation of Japan under Douglas MacArthur was wisely  aimed at rebuilding a country whose cities had been turned to ashes by U.S. bombing. Again the result was to turn a wartime enemy into a friendly and potentially powerful ally against Communist China. Meanwhile, Japan was to remain demilitarized for the foreseeable future.

The United States emerged from a war that had killed 30 million people with its own cities intact, an expanding economy, and as the world’s most powerful nation. The war had exacted such a heavy toll on the Soviet Union that it could hardly compete. Nevertheless, Washington’s postwar foreign policy was devoted to preventing the spread of Soviet influence anywhere beyond Eastern Europe. To accomplish that end the U.S. was almost  continuously at war, with American troops or proxy armies, wherever a country in Asia, Africa, or Central America seemed in danger of turning communist and coming into the Soviet orbit.

After each war, whether in Korea, Vietnam, Angola, Guatemala, Nicaragua, El Salvador, Kosovo,  or Iraq, Washington showed little concern for the nature of the resulting government as long as it was anti-communist. Too often the resulting regime was either corrupt, or brutal, or both. Our current wars, in Afghanistan, Iraq, Libya, and Syria,  show evidence of leading to a similar result.

In Iraq, a series of U.S.-backed Shiite-dominated governments, especially under former prime minister, Nouri al-Maliki, intensified the ethnic conflict between Shiites and Sunnis that had resulted from the American invasion and overthrow of Saddam Hussain. The current prime minister, Haider al-Abadi, has tried to heal the split by incorporating more Sunnis into the government and releasing many of the Sunnis imprisoned under the former government. But so far he has made little progress. “He has the willingness, but he hasn’t made any reforms,” said Sheikh Faisal Asawi, the mayor of Falluja. “He has no power, to be honest.”

Consequently, Iraq remains a dysfunctional state, in danger of splitting into Kurdish, Sunni, and Shiite mini-states. The paralyzed Parliament is unable to provide enough basic services such as electricity and water. Under such conditions, Iraq is a fertile recruiting ground for the Islamic State, or ISIS. “It did not grow from the earth,” Sheikh Asawi said of ISIS. Iraqis joined “but because of corruption, because of injustice, because of the culture of hate.”

Ryan C. Crocker, a former U.S. ambassador to Iraq, blames current U.S. policy, or lack of policy, toward Iraq for ISIS’s rise and continued growth. “There is no political architecture that will convince any Sunni over the age of 3 that he or she has a future with the Iraqi state,” he said recently. “The administration is trying to use a limited military weapon to defeat an adversary that only a political offensive can overcome and we’re not willing or able to make that effort.”

The “military weapon” that Crocker referred to includes the recent effort to reclaim the city of Ramadi and much of Anbar province from ISIS. The Iraqi army was only able to recapture Ramadi with the help of heavy American bombing, but as a result the city became a barren landscape, with hundreds of thousands of its residents made homeless and forced to flee. The U.S. has agreed to contribute $10 million to pay for generators and limited-service clinics, but the Iraqi government doesn’t have the funds even to begin rebuilding.

A similar scenario is playing out in Libya, where in 2011 under pressure from France and Obama administration hawks, American bombing attacks helped insurgents oust long-time strongman Muammar al Qadaffi. Qadaffi’s overthrow unleashed the religious, tribal and ethnic militias he had kept in check and they are now fighting one another for power. There is no longer a central government, but instead two rival parliaments, one in Tripoli and one in Tobruk. The power vacuum has enabled ISIS to become a magnet for unemployed young men throughout the Middle East and North Africa, so that today

ISIS forces in Libya total an estimated 6,500. The group is well armed — just after Qadaffi was overthrown, ISIS members broke into his extensive arsenal and distributed the contents to its fighters throughout the Middle East and Africa. They have so far succeeded in capturing a 150-mile stretch of the coastline and are mounting increasingly successful attacks on Libya’s oil facilities.

In an attempt to stop the flow of recruits to ISIS, forces from 30 African and Western nations are currently taking part in training exercises in Senegal. But many analysts maintain that the use of military force is not what it will take to defeat ISIS. Martin Kobler, a German diplomat, citing ISIS’s rapid growth between 2015 and 2016, noted, “This is something that can only flourish in a political and security vacuum.”

So far there are few if any signs that the international community is taking steps to fill that vacuum. The U.S. with its overwhelming air power is almost certain to weaken or defeat ISIS in the end. But If the political and economic grievances that spurred its growth are left unresolved, it won’t be long before another, equally dangerous group arises. Meanwhile, policymakers should be asking themselves how many new enemies for the U.S. our extensive bombing campaigns are creating.