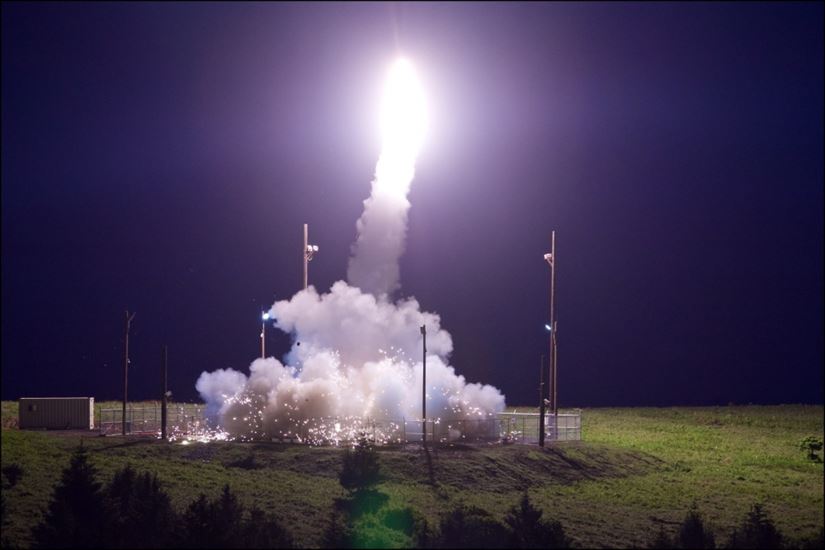 North Korea isn't the biggest threat to the world. Climate change is.
By Emanuel Pastreich | August 1, 2017

The news in Seoul has been completely taken over by reports that North Korea has launched another missile into the ocean. Images of the missile launch were repeated over and over again followed by speculation that North Korea would use the missile to attack the East Coast of the United States. The reporting was pure hype without a single rational voice offering an opinion about the significance of one missile launch or the difficulties of assessing the possible payload for such a missile.

The timing of this news coverage with South Korea’s deployment of the THAAD missile defense system was too perfect. Missing from the discussion has been the real threats that South Korea faces and whether missile defense is effective. These two obvious questions were swept under the rug.

North Korea’s missile launches in fact were a response to a series of live ammunition drills off its coast by the United States, South Korea, and Japan that have been going on, more or less continuously for a year. To North Korea, these drills seems like a preparation for an invasion. Not only is it natural that North Korea would make some response, granted the United States penchant for illegal regime change, it is entirely legal to do so according to international law. The United Nations Security Council has condemned North Korea for missile launches and called for sanctions, but China’s suggestion that both sides freeze their military actions is far more rational and Pyongyang has indicated that it is open to such negotiations.

The Myth of Missile Defense

Koreans hear every day in the media about the threat of nuclear attacks from North Korea. Although North Korea probably does not have the capability yet, eventually it will have missiles that can deliver explosives and, eventually, nuclear weapons.

But that is where the science stops. If you sit down and actually read about strategies for ending arms proliferation and promoting disarmament, you will learn that increasing military drills and threatening first strikes is the worst approach. At present, North Korea has no incentive to attack South Korea. Its missile tests are an effort to deter an attack by an aggressor.

Missile defense does not work as a defense against the rather unlikely scenario of a missile attack from North Korea. At best, THAAD and its brothers and sisters can shoot down a small percentage of incoming missiles, and even that is doubtful. It’s possible, for instance, to use dummy missiles and exploding debris to trick missile defense systems.

The U.S. military no longer subjects its weapons systems to critical evaluation by objective third parties, and most reports about successes look more like PR releases than actual science.

Moreover, missile defense systems, as opposed to nonproliferation treaties, are perceived as aggressive. Although they may not stop so many incoming missiles, they can be very effective at setting off an arms race.

If China feels truly threatened, it can go from under 300 nuclear weapons to over 10,000 in a short time. It has the technology and the economic power to match what the United States and Russia have. Japan is already considering declaring its intentions to develop nuclear weapons. If it completes with China and Russia, Japan could also shortly have 6,000 nuclear weapons.

The rest of the process would be just a chain reaction. South Korea is already seriously discussing nuclear weapons development. The reason given is North Korea, but clearly the destabilization of the security order in East Asia is the real reason. South Korea could also develop 3,000 nuclear weapons, or more nuclear weapons. And then what? Taiwan? Vietnam, Indonesia?

The massive proliferation of nuclear weapons throughout Asia is the real danger, and it would make the potential for nuclear warfare far greater. North Korea’s tiny nuclear program, despite constant media hype, does not pose that sort of threat at this point. It could be frozen and testing stopped or reduced if the United States were willing to enter into serious negotiations.

The Existential Threat of Climate Change

The threat of climate change to the Korean peninsula over the next 30 years is enormous. The cost of adaptation to, and mitigation of, this threat is so large that Korea has no choice but to sign agreements with its neighbors for categorical disarmament in conventional and non-conventional weapons across the board so that it can put together a budget to support the rapid and complete transformation of its economy to a 100% renewable one and end dependency on fossil fuels within the next 10 years.

Those who resist efforts to redefine “security” to include the environment and to invest in a sustainable economic system are guilty of crimes against future generations of Koreans. Yet many are seduced by oil money, the automotive market, and other powerful interests and support dishonest plans for Korea’ s security that do nothing for climate change but threaten to encourage an arms race that Korea can ill afford.

Koreans have experienced the yellow dust blown over from the spreading deserts in China, turning their skies grey and causing respiratory diseases. But the flow of dust from the deserts is just starting. The terrible combination of droughts followed by torrential rains that wiped out Korean agriculture this year is going to get much worse. The air in South Korea is full of micro-particles given off by outdated factories and coal-powered power plants in Korea and China. If the sort of planning for the regional biosphere had been made that has been made for wars with North Korea, South Korea would already have a sustainable economy with minimal pollution. Sadly, security policy in Seoul rarely takes into account dropping water tables, failed aquifers, or the rapidly spreading arid land throughout China and North Korea.

Bureaucrats in Korea assume that they can somehow make up for lost agricultural land through “free trade” and poisoned water by buying grains and vegetables from abroad. But climate change suggests that this plan is a false dream. The United States, Russia, Australia, Argentina, and other exporters of food will suffer from terrible droughts in the future and will no longer be able to provide food for Northeast Asia. The problem of who will feed China will dominate security discussions in the years ahead, especially as Chinese consume more meat (which requires more water).

Ironically, the spread of deserts will be accompanied by the rise in sea levels around the world, which will flood many cities like Busan and Incheon and require massive infrastructure investment. Korea has no concrete plans for responding to this immense crisis over the long term. Because of the dishonest reporting of the media, many Koreans have only the vaguest idea what climate change means.

The rising temperatures of the oceans, combined with their increasing acidity, will lead to the extinction of many species of fish that represent a major source of protein for Koreans. Tuna, mackerel, shrimp, and salmon may only be available from factory farms. The full impact on the Earth of the death of coral reefs and the acidification of oceans is unknown, but it is likely to be catastrophic.

Trying to discuss these real security threats in Korea within the current discourse on security practiced at Korean think tanks and university programs in “security studies” is like trying to talk about quantum physics with medieval clerks lost in the myths of alchemy. Most experts define security in such a myopic and narrow manner that the only solution they can offer to complex problems is to purchase a weapons system from a military supplier.

Hyping a missile threat that is so improbable when the danger of climate change is guaranteed and infinitely more dangerous – in fact it is already killing thousands through lung cancer and other diseases – is the height of irresponsibility.

Addressing Korea’s real security threats – climate change and environmental catastrophe – requires a transformation of Korean culture and economy. Korea must make a long-term (30-50 years) investment in the infrastructure required for survival. Such long-term investments, for instance to cover the cost of solar panels for all homes, will bring stability to the Korean economy and move it away from the dangerous casino approach to economics. .

Korea faces a unique challenge in responding to this problem because its population is aging so rapidly. Many older Koreans are unable to understand that the industrial policies of steel manufacturing, petrochemical refineries and the automotive sector are not the source of Korea’s economic salvation, but rather the path to death and destruction. They seem unaware of the impact that industrialization based on naphtha cracking and iron refining has done tremendous damage to the country’s precious environment. They perceive highways as a sign of progress, not as the destruction of valuable farmland.

From the youngest age, Koreans must become aware of how every piece of wood cut down in Indonesia, Malaysia or Russia does great damage to the planet if not properly managed. Every single action on the ecosystem has implications for those to come for seven generations.

Missile launches are today’s headlines. The real story is the environmental threat that, if not urgently addressed, will undermine the security of everyone.