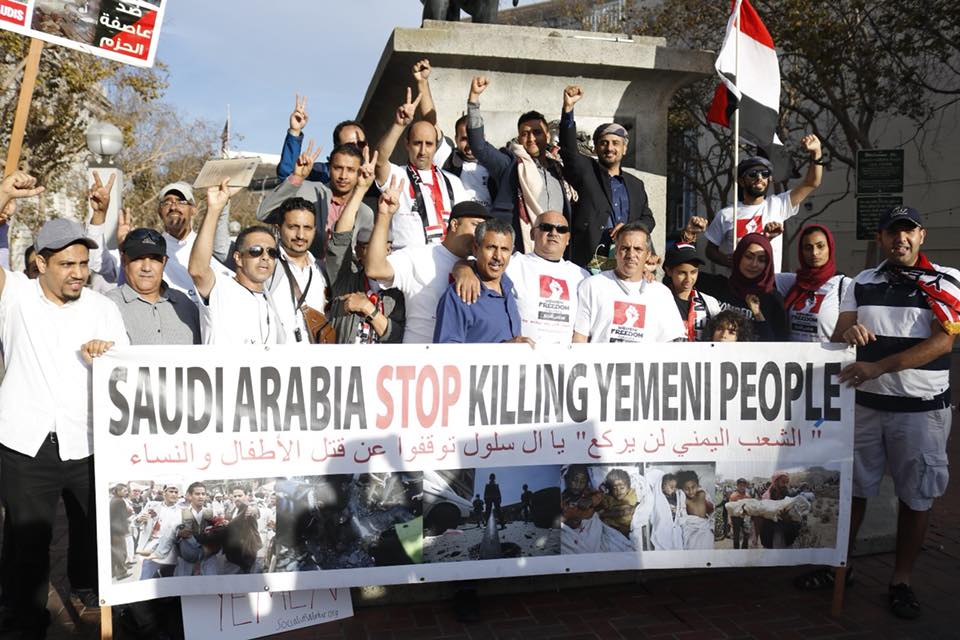 Mobilizing Muslim Resistance to the Saudi War in Yemen

Yemeni Americans organizing against the war hope more Muslim organizations will use their platforms to end to the world's worst humanitarian disaster.
By Huzaifa Shahbaz | August 2, 2019

Right now, the people of Yemen are suffering through the world’s worst humanitarian disaster.

The Saudi-led coalition, backed by the United States, continues to bomb Yemen and launch unlawful airstrikes that have hit homes, hospitals, schools, and mosques. This violence has left millions at risk of starvation and death due to repeated outbreaks of diseases like cholera, and an estimated 3 million women and girls at risk of violence. According to a recent UN-commissioned report by the University of Denver, even if the conflict were to end this year, it would account for 233,000 Yemeni deaths.

Amid this deteriorating situation, President Trump recently vetoed a series of bipartisan measures that were aimed at blocking the sales of U.S. weapons to Saudi Arabia. Trump’s veto signaled a strong message to the people of Yemen that the profits of U.S. arms manufacturers — and the Saudi-U.S. alliance — are more important than their human rights.

Saudi Arabia, of course, isn’t just a U.S. ally and a regional power in the Middle East. As the birthplace of Islam and home to its holiest sites in Mecca and Medina, the kingdom also brands itself as an authority on the faith. Yet as a Muslim American watching the Saudis cause the world’s worst humanitarian tragedy, I wonder: How Islamic is Saudi Arabia? Are they the righteous representatives of Islam they so desperately portray themselves to be?

For many Muslims in the west, including myself, it’s been increasingly frustrating to witness our faith being exploited and weaponized in service of a regime that so wantonly violates human rights. Whether it’s the domestic repression, the brutal murder and dismemberment of journalist Jamal Khashoggi, or the blatant human rights violations committed in Yemen, Saudi Arabia is acting against what it means to pursue justice against oppression in the name of Islam.

Don’t take my word for it — ask the Yemeni Alliance Committee (YAC), a community advocacy organization founded in the Bay Area. They work to resist anti-Yemeni policies and promote stability and security for Yemenis and Yemeni Americans.

I had the privilege to interview Jehan Hakim, chair of the Yemeni Alliance Committee and former community advocate for the Asian Law Caucus. I wanted to better understand the inspiration behind the formation of YAC and her thoughts on the Saudi-led war in Yemen, which group members started protesting in 2014 before officially establishing YAC in 2017. The group’s members include over 100 Yemeni-American Muslims, and they’ve forged alliances with progressive and peace groups across the country — including Win Without War, Just Foreign Policy, Action Corps NYC, and Freedom Forward.

Throughout our conversations, Hakim referred often to how she and other members of her organization have drawn from faith to speak out against oppression. “We have this perspective where our Islamic values come in where we have to fight for justice even in the face of a tyrant, even if it’s speaking against your own family,” she told me. Hakim argued it was a duty for every Muslim to uplift those who are oppressed and give voice to the voiceless.

In YAC meetings, Hakim and her team begin and end by remembering God in their work and reading hadith (sayings of the Prophet Muhammad) to remind themselves why they do this work. “It’s very draining and tiring,” Hakim reflected. “What keeps us motivated is faith and seeking justice.”

Around the Bay Area, YAC members have organized rallies calling for an end to the war and the U.S. role in it. They’ve met with California Senator Kamala Harris and Rep. Ro Khanna’s office to push for the congressional War Powers Resolution on Yemen — which was ultimately successful, before Trump vetoed it — and protested outside Speaker Nancy Pelosi’s office as well as on the streets.

By calling out Saudi Arabia’s violence as entirely contradictory to the tenants of Islam as most Muslims practice it, YAC has demonstrated what it means to pursue justice in the name of religion. Yet while they’ve formed alliances with anti-war movements and other advocacy groups, they hope that more Muslim organizations will use their platforms and lobbying efforts to put an end to the humanitarian disaster in Yemen.

The Muslim community must be united to oppose a system that has weaponized hate to legitimize wars. We must stand firm and reclaim the true spirit of Islam that has been abused by the Saudi government and their pro-war proponents. If you are ever in doubt of what Muslim activism looks like in action, remember the Yemeni Alliance Committee.

Huzaifa Shahbaz is a Next Leader at the Institute for Policy Studies.