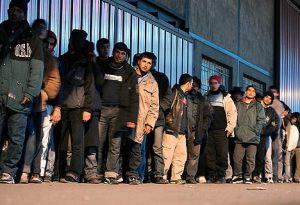 Most Asylum Seekers Are Not Cheaters

In the wake of the DSK case, stories of asylum cheats are spreading. But the reality is of honest, desperate people navigating a deeply flawed system.
By Anna Theofilopoulou | August 15, 2011

Allegations have surfaced that the Guinean woman who accused the former executive director of the IMF, Dominique Strauss-Kahn, of sexual assault had lied during her asylum proceedings. This story has fed into a larger narrative that desperate immigrants, assisted by unscrupulous enablers, cheat their way through the system to gain asylum. Some media outlets played their part to further advance this impression.

A front-page article by Sam Dolnick in The New York Times last month focused exclusively on false asylum claimants and their enablers who for money or misguided good intentions advise them to lie to gain asylum. Suketu Mehta followed with a piece in The New Yorker on the same subject and focusing on one specific such case. Both writers appeared to have interviewed only asylum cheaters and those who help them cheat. They didn’t bother to talk to anyone who actually assists asylum seekers present a truthful and honest case. Neither piece makes any attempt at balance or even mentions the many pro bono organizations and individuals who work with asylum seekers to guide them the right way toward legalization.

Such pieces in the liberal media inevitably produced fodder for the many xenophobes who tend to consider most immigrants illegal. The majority of the comments left on the The New York Times article’s blog, while registering satisfaction that the newspaper validated their point of view, demonstrated a complete ignorance of facts regarding asylum proceedings. The comments that called attention to the inaccuracies of the reporting and questioned the reporter’s point of view generally came from individuals with direct experience with asylum claimants who were knowledgeable about asylum proceedings.

The U.S. asylum process is long and complicated, and the burden of proof falls solely on the claimant. Weaknesses in the asylum procedure that invite and allow this type of abuse can be fixed. Despite a hopeful start, however, the Obama administration and Congress have abandoned all efforts at immigration reform, and the millions of irregular immigrants who provide badly needed support to the U.S. economy continue to live in the underbelly of society.

In an excellent opinion piece in The New York Times on July 5, Mike McGovern of Yale University cautions against stereotyping of all asylum seekers and invites readers to show empathy before judging the woman from Guinea. He describes the dismal socio-economic and political situation in Guinea, which could apply equally to many additional African and other developing countries. Large numbers of the citizens in those countries find that the only way to escape prison or torture or death is to flee their country.

Although some claimants are driven or advised to lie in order to improve their chances of asylum, the bar is very high for asylum applicants. They have to show and substantiate their most horrendous experiences while locating their own legal advice to guide them through the complex process. The burden of proof for the claims falls on the applicants. As for the deciding judges, they rely not only on their experience and intuition but on forensic medical and psychological evaluations performed by accredited U.S. professionals.

Having direct experience in working with asylum seekers through my pro bono services to the Refugee and Immigrant Fund (RIF), a small non-profit organization operating in New York City, I have met many claimants. I have also interacted with several individuals and organizations that help and guide asylum seekers on their way to legalization. The process runs as follows:

The Fund conducts a thorough in-take interview involving detailed questioning to establish the validity of an asylum seeker’s claim. There follows research of facts for the drafting of a legal affidavit that will be sent to the immigration authorities or courts on behalf of the applicant. Next comes the desperate search to find a pro bono legal provider to prepare the legal affidavit and submit the application before the one-year deadline. Once an attorney takes up the case, the applicant will be thoroughly questioned to tie up any loose ends in the narrative and if necessary, he or she will be directed to a mental health professional and medical centers and hospitals in New York to verify their mental and physical wounds and scars. The psychological evaluations prepared by health care professionals attesting to severe mental traumas of many of these claimants are submitted together with the legal affidavit and sometimes the mental health professional might be asked to also testify.

Finally the hearing by an immigration officer or judge involves detailed and meticulous questioning searching for veracity and consistency in the claim. When a case comes in front of a judge, the government’s lawyer role is to question and second-guess the claimant trying to prove that he/she could safely be deported to their country. After the hearing comes the anxious waiting for the decision. This can result in a celebration when the result is positive or heartbreak when despite all the valiant and honest efforts the decision is negative.

Based on the above process, Frank, a gay man from Cameroon, which has a penal code against homosexuality, won his asylum. Florence, a lesbian from the same country who had been imprisoned and raped by police before her family managed to scrape together the money to send her out of Cameroon, did not. Bushra and Abeer, two Iraqi women who are a Christian and a Shi’ite with one dependent child each and both fleeing abusive husbands and sectarian violence, also won their cases. However Madi, a former World Bank employee and opposition activist in Guinea who was imprisoned and severely tortured in jail and was hospitalized in New York while also suffering from PTSD, was denied asylum at the first hearing. He now has to wait another two years for a court hearing.

At RIF, if the first intake interview conducted by the head of the organization and the senior advisor raises validity questions, the claimant is referred to RIF’s legal advisor. He conducts a separate legal evaluation of the case. If he is not satisfied either, the claimant is told that RIF cannot assist. So, for instance, RIF turned down two missionaries from a worn-torn African country living and working in a neighboring country who claimed that security agents from both countries were after them because they had managed to get mineral extraction multinational corporations to invest in their country of origin. Their story had several gaps that could not be satisfactorily answered. RIF denies approximately 30 percent of claimants yearly, based on such reasons.

In 2010, the number of asylum claims in the United States reached 55,530, a 13 percent increase from 2009, compared to a 5 percent decrease by all industrialized countries together. In fact, the United States was the single largest recipient of asylum claims among industralized countries in 2010. Of those, 21,113 asylum cases were approved, a decrease from the 22,119 granted asylum in 2009 and a further decrease from the 22,838 accepted in 2008.

According to information from the Department of Homeland Security and the UN High Commissioner for Refugees in 2010, the United States approved 38 percent of asylum claims (not 51 percent as reported by The New York Times). A large number of these individuals have fled political violence or gender or religion-based abuse in their countries. Not knowing how to start the asylum process and who to turn to, not surprisingly, many of these asylum seekers fall into the hands of unscrupulous individuals who will seek to profit from their desperation by providing false or at best questionable legal assistance that more often than not derails their efforts toward asylum.

In the United States, no assistance is provided to asylum seekers before their hearings by the federal government, states and most local communities. In New York City, which gets more asylum seekers than anywhere else in the country, the number of reputable non-governmental organizations that provide pro bono legal assistance to asylum seekers is very small. Some individual attorneys provide pro bono or low bono assistance, however the overall numbers are nowhere near enough to cover the high demand. As would be expected, these providers are inundated with cases and have no option but turn down the more complicated claims that require a lot of time and effort on the part of the attorney.

The flaws in the system are many. There are a limited number of attorneys to represent asylum cases. Applicants have a one-year deadline within which to apply for asylum. Because of the high work loads of immigration judges and officers, there are long delays for hearings. Last but not least, few organizations are available to assist asylum seekers. Such organizations could address the innate fear of traumatized people toward authorities as well as their distrust and even shame of needing psychological or psychiatric help. At the same time they would guide them to find legal help and provide them with a warm and humane environment during the difficult time of adjustment in a new country.

Such an example is the Asylum Seeker Resource Centre (ASRC), Australia’s largest asylum-seeker organization which provides legal aid, advocacy, food, health services, and psychological counseling in a one-stop facility to address all immediate needs of freshly arrived asylum seekers. ASRC is independent and receives its funding from philanthropy, local communities, and state governments that recognize the value of the services for the asylum seekers and the states themselves.

Considering what the United States represents for the rest of the world, it is not surprising that it receives and will continue to receive the largest number of refugees in the developed world. However political extremism has recently been encouraging intolerance and xenophobia, and the country that was created by immigrants and welcomed the “huddled masses yearning to breathe free” has resorted to increased deportations and building fences along its southern border to deal with its immigration problems.

The majority of politicians seem to have forgotten that immigrants, refugees and asylum seekers have contributed to this country’s greatness and exceptionalism and that this country was built on the very simple idea that “we all aren’t here yet,” as MSNBC’s Laurence O’Donnell very aptly puts it.

Anna TheofilopoulouAnna Theofilopoulou is a contributor to Foreign Policy In Focus and a former UN official with background in the Middle East, Africa, and Latin America. She is currently senior advisor to the Refugee and Immigrant Fund, a New York-based non-profit organization providing asylum seekers with legal and psycho-social support on their way to legalization in the United States.