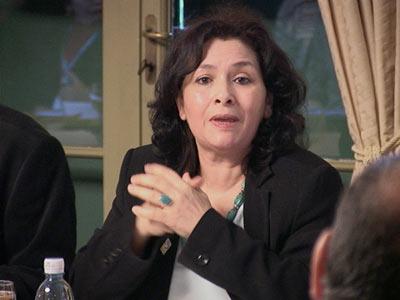 Mothers of the Jasmine Revolution

Tunisian women were at the forefront of their revolution, and they are trying to make their voices heard in the transition as well.
By Imed Labidi | January 31, 2011 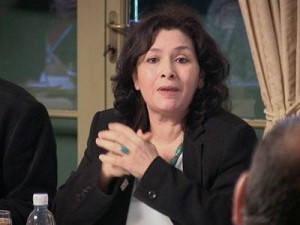 On January 14, 2011, the ousted former Tunisian dictator Ben Ali fled the country and found his way to Jeddah, Saudi Arabia. Just two days earlier, French Foreign Minister Michèle Alliot-Marie told her National Assembly’s Foreign Affairs Commission that French expertise could help suppress the Tunisian uprising and restore order. Although the French can take much pride in their history of revolution, and perhaps less in their government’s special police forces and creative methods of taming demonstrators, this faux pas came as no surprise. It simply reflects the reality of European politics and how little EU democracies, and France in particular, care about democratization in North African nations.

The U.S. reaction was not much better. In an interview with Al Arabiya television another powerful woman, Secretary of State Hillary Clinton, echoed the same indifference as the French foreign minister. “We are not taking sides,” Clinton said. Such a cold comment contrasted with her earlier insistence, on the pan-Arab TV show Kalam Nawaem, that “a woman’s voice must be heard and worthy of respect.”

The Tunisian mothers, wives, and sisters mourning the deaths of their fallen sons and daughters expected more sympathy from the international community, particularly from women in power. They may even have fantasized about a public figure showing her solidarity with other struggling women like Mannoubia and Samia Bouazizi, the mother and sister of the young man whose self-immolation triggered the country-wide protests. Shocking and cruel, the French foreign minister’s words ignored and invalidated 25 years of Tunisian women’s suffering and sacrifices. It denigrated these women’s commitment to defend their families, communities, and homelands, as well as their determination to be equal participants in the remaking of Tunisian politics.

Since the mid-1980s, exiled journalist and human rights activist Sihem Ben Sedrine wrote ceaselessly about the absence of basic rights, censorship, government surveillance, and retaliation against those who contest the regime’s undemocratic practices. In an open letter addressed to Ben Ali entitled “Time to Quit, Mr. President,” published only few days before the riots spread in Tunisian cities, Sedrine uncovered all the political decay in the Tunisian system, from staged elections to the dangerous leadership ambitions of unqualified wife of Ben Ali, Leila Al Trabelsi. For her efforts to engage with the government and encourage more democratic and productive public debate, Sedrine was labeled a prostitute by the regime’s agents. Both she and her colleague Naziha Réjiba, cofounders of the independent online magazine Kalima, faced smear campaigns and threats. But they prepared the ground for the revolution by teaching Tunisians to appreciate the values of democracy, independence, self-confidence, and tolerance.

Many of the images first beamed to the world of the Tunisian protests were of men, giving the illusion that it was only the men who wanted change. As Nadia Marzouki writes, “A surprisingly under-covered aspect of the Tunisian demonstrations is the impressive visibility of women, also in contrast to stereotypes about the ‘Arab street’ that propagate the image of a male-dominated public space.” In the cities of Zidi Bouzid, Ghafsa, Msaken, and Sfax, and then eventually in the streets of the capital of Tunis, the mothers of the Jasmine revolution claimed their space. National Public Radio’s Eleanor Beardsley reported that “female voices rang out loud and clear during massive protests that brought down the authoritarian rule of Tunisian President Zine el Abidine Ben Ali.” Women were on the frontlines of protest marches and fought against the oppressive rule of a ruthless regime supported by the whole democratic world. Gracefully, they rose on the shoulders of their brothers chanting “bread, water, and No Ben Ali.” This short phrase, when sung in Arabic rhymes, conveyed a strong message that Tunisians would no longer tolerate corruption, injustice, and political marginalization. In short, they were willing to accept the bare minimum to survive in exchange for abolishing the dictator’s rule.

Tunisian women were everywhere on social media outlets. On Facebook videos and on Twitter, young women and men strongly expressed their dissent. They held signs that read “Ben Ali Dégage” (Ben Ali get the hell out). They faced tear gas and bullets, the violence of Ben Ali’s informants and loyalists, and the rage of undercover police. They came from different generations, different backgrounds and social classes, and held divergent political beliefs.

They stood united, capturing videos on their phones and posting them online. Unidentified women were filmed, voicing their complaints directly to police forces and to the military personnel on the streets of Tunisia. Women were gunned down, such as a woman shot and killed in Nabeul, but the media rarely mentioned the women who took part in the demonstrations or who became the victims of the security forces.

Like their revolutionary and brave Algerian sisters, who in the 1950s helped bring one of the most developed and vicious colonial armies to its knees and ushered the end of a longstanding European empire, les Tunisiennes challenged the premise that resistance, revolution, and war are the work of men alone. Defiantly, the women continued the resistance until Ben Ali “got the hell out.” Now that he’s gone, Tunisian women are appearing on Arab television and participating in the formation of neighborhood watch groups. Since the country’s independence in the mid-1950s, Tunisian women benefited from a civil rights code that guaranteed their equality and gave them access to a good educational system. In the aftermath of the revolution, they are eager to secure those rights.

The Ignorance of the West

Nicholas Beau and Catherine Garciet, in their best selling book La Régente de Carthage, told the rags-to-riches story of the former first lady of Tunisia and wife of Ben Ali, Leila Al Trabelsi, and her family’s subsequent corruption. For most Tunisians, there wasn’t much new in this account. The book’s significance lay not in the information it exposed about the level of corruption, theft, money laundering, racketeering, and banking fraud, but in the analysis of France’s cooperation. The French government knew of these violations and human rights abuses, and supported the Tunisian ruling elite anyway. Soon after, Wikileaks revealed several cables proving that U.S. officials knew as much about the level of corruption as the French did.

Alas, Europe and the United States turned a blind eye. They knew Tunisia was run Mafioso-style, with power almost equally shared between Ben Ali, Leila, her family, and a few other corrupt families who pilfered the country. The World Bank, the IMF, France, and many other EU democracies helped Ben Ali’s rule promulgate the myths of the “Tunisian miracle” and the Tunisian regime as a model of stability.

The Tunisian miracle does exist. It is unfolding today on the streets of all Tunisian cities. Men and women are coming together in solidarity to pick up the pieces of a bloody revolution. Communities are forming and organizing cleaning campaigns during the day. Watch groups are providing security at night. Vigilant social media networks are disseminating information around the clock. People are staying united, sharing food and medicine.

And Tunisian women, who played such a vital role in the protests, are playing an equally vital role in rebuilding their society and inspiring Arabs in other countries to follow their example. “We demand the creation of a constitutional council to rewrite the constitution and harness all the forces that have contributed to this revolution so that the dreams of the people can be realized,” said Sihem Ben Sedrine. She is still occupying center stage in the political debate, securing women’s participation in the transition and making sure their voices are heard.

Imed LabidiForeign Policy In Focus contributor Imed Labidi is an international media and cultural studies scholar who currently lectures for the department of cultural studies and comparative literature at the University of Minnesota.