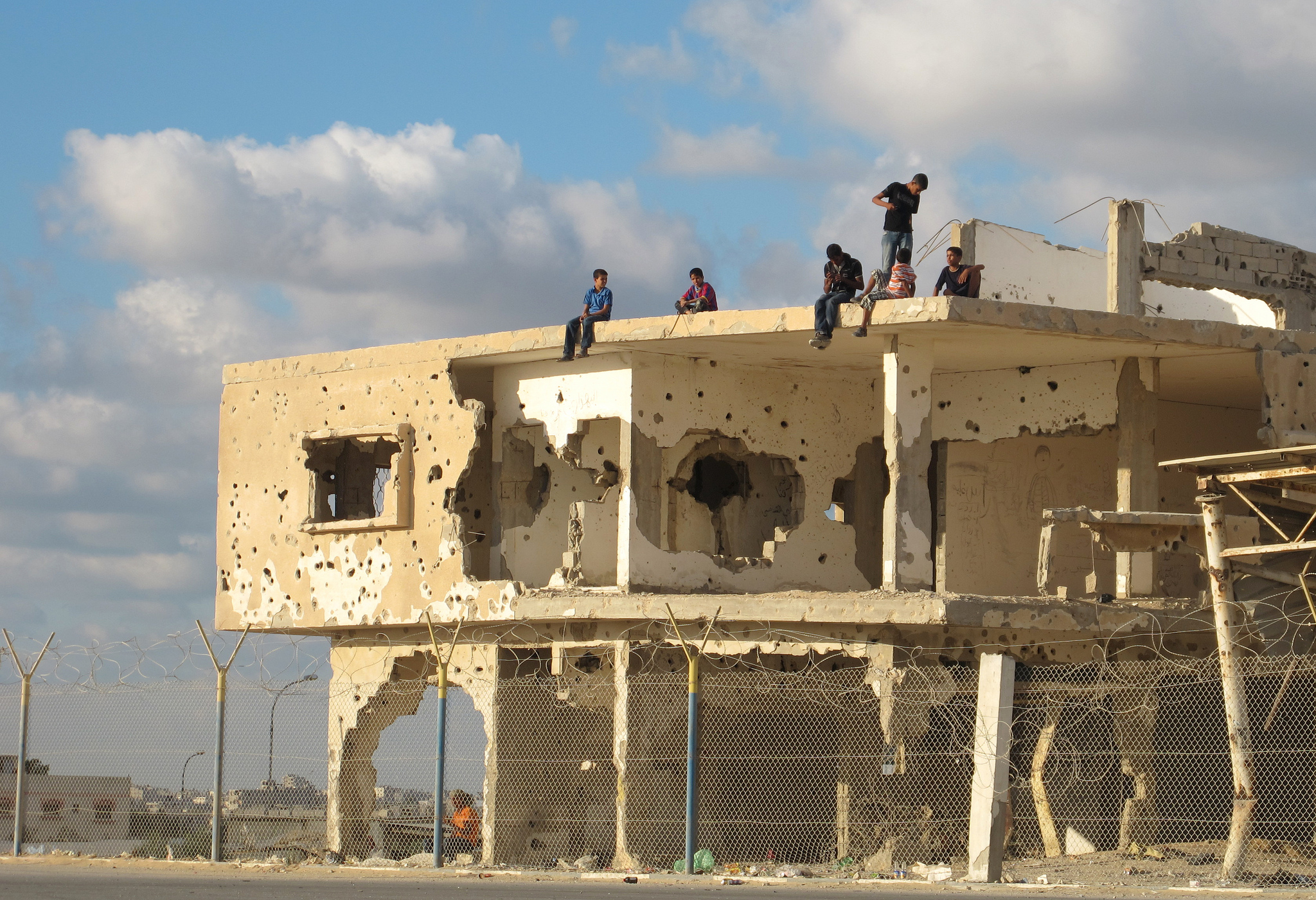 Israel's favorite metaphor for its periodic strikes on Gaza--"mowing the lawn"--suggests violence that is mundane, indiscriminate, and recurrent. (Photo: United Nations Photo / Flickr)

Mowing the Lawn in Gaza

Israel believes it can bomb Gazans into changing their interests. How long will Obama support this delusion?
By John Feffer | July 16, 2014

The Palestinians of Gaza are guilty of that new post-Cold War misdemeanor: voting while Muslim. The punishment for this crime has been eight years of economic hardship, international isolation, and periodic Israeli bombardments.

Like the Algerians in 1990 and the Egyptians in 2012, Gazans went to the polls in 2006 and voted for the wrong party. Rather than supporting the secular choice, they cast their ballots for Hamas. Not all Palestinians are Muslim (6 percent or so are Christian). But by opting for the Islamic Resistance Movement—Hamas, for short—Gazans had effectively nullified their own ballots.

It didn’t matter that the EU and other institutions declared the elections free and fair. The results were what mattered, and Israel’s judgment carried the day. Even though the newly elected government extended an olive branch to both Israel and the United States, the Israeli government didn’t consider Hamas a legitimate political actor.

“Israel stated that Hamas were terrorists and Western leaders did not challenge this line,” writes Cata Charrett in an excellent piece at Mondoweiss. “On the contrary, they refused to meet diplomatically with Hamas leaders, they cut off all possible financing to the newly elected government, and they supported Israel’s complete sanction and seizure of Gazan territory.” A direct peace overture to President George W. Bush offering a long-term truce went unanswered.

Voting while Christian or voting while Jewish has not led to similar results. Christian Democrats have won elections in Europe without generating boycotts or warnings about an imminent descent into clerical autocracy. The ultra-religious Shas party has participated in ruling coalitions in Israel without incurring the wrath of the international community.

But Hamas, its critics insist, is different because it is fundamentally anti-democratic. Ditto the Muslim Brotherhood. Even Turkey’s Justice and Development Party and Tunisia’s Ennahda are suspect, according to those who hold to the dictum that Islam and democracy are fundamentally incompatible.

The fear of Islamic fundamentalism taking over the Middle East through the ballot box began in 1990 when the Islamic Salvation Front won 55 percent of the vote in local elections in Algeria. The following year, with the Front poised to win the national elections, the Algerian government banned the party and jailed its leaders, precipitating a civil war that left more than 100,000 people dead. At the time, Assistant Secretary of State for Near Eastern Affairs Edward Djerejian declared that the U.S. government opposed what it called “one person, one vote, one time.” Washington worried about the possibility that Islamist parties would use democratic means to rise to power and then kick away the democratic ladder beneath them.

This prospective outcome prompted the United States to continue supporting its traditionally authoritarian allies in the region. The Arab Spring offered some hope that the United States had changed this policy, with the Obama administration withdrawing its support, albeit reluctantly, from Egyptian leader Hosni Mubarak just before he stepped down in early 2011. But the older preference for status-quo strongmen has reasserted itself, as Washington has looked the other way at Nouri al-Maliki’s obvious faults in Iraq, continued to support the royal elite in Bahrain, and quickly moved to embrace coup leader Abdel Fattah Al Sisi in Egypt.

Let me be clear: I wouldn’t vote for Hamas. And I would rather that the party clearly recognized the right of Israel to exist (just as I would prefer the Republican Party to recognize the right of gay marriage to exist).

But my preferences are beside the point.  Hamas represents a large constituency. Many Gazans voted for the party because they were disgusted with the corruption of the secular Fatah movement and were impressed with the social service system Hamas had created. Like other resistance movements—the African National Congress, the Irish Republican Army—Hamas was on its way toward becoming a political party. If such a party takes power only to behave undemocratically—as the Muslim Brotherhood arguably did in Egypt—that’s a different question. But if you claim to respect democracy, you must recognize the results of free and fair elections. And if you want a party to change its position—and it’s willing to talk—you have to sit down at the table and negotiate with it.

But Israel—and by extension the United States—didn’t choose this option. As a result, a border conflict has raged ever since, with two particularly severe flare-ups in 2008-9 and 2012.

Last month, Hamas and Fatah set aside their own substantial grievances and forged a unity agreement on administering both Gaza and the West Bank. Here was a perfect opportunity for Israel to move forward with a new deal. In reality, however, this was a signal for Israel to go on the offensive. It just needed an excuse. When Gazan militants linked to the Islamic State (formerly ISIS), but not Hamas, kidnapped and killed three Israeli teenagers, Netanyahu had his excuse.

Israel’s latest bombing campaign has already left nearly 200 Palestinians dead. Roughly 70 percent are civilians; more than 30 of the victims are children. Israeli bombs have fallen on houses, apartment buildings, a disability center, a café. Foreigners have even volunteered to be human shields at a hospital that has already been struck twice. The Israeli Defense Forces maintain that they warn residents of a building beforehand of a strike, but this practice is inconsistent.

Some Israelis refer to their periodic shelling of the Palestinian territory as “mowing the lawn.” It is a disturbing metaphor because it is so indiscriminate. They don’t talk about “weeding the garden” or “pruning the trees.” A lawnmower cuts down everything in its path—grass, weeds, wildflowers. Also, a lawn needs constant mowing, suggesting that Israel plans to conduct bombing campaigns on a seasonal basis.

But Netanyahu may well see an opportunity to eliminate Hamas altogether. The organization no longer can count on support from the Muslim Brotherhood in Egypt or Syria’s Assad. Ties with Iran were also strained by the support Hamas provided to rebels fighting in Syria. Nor can the territory rely on supplies coming in through tunnels from the Sinai. Those to the right of Netanyahu—unbelievably, the Israeli political spectrum has such ultraviolent frequencies—are reportedly pressing the government to launch a ground offensive. Mowing the lawn would then quickly become a scorched earth policy.

It’s not a fair fight. The casualty rates are grotesquely asymmetrical. Israel’s Iron Dome missile defense system has reduced the number of casualties on the Israeli side to a single death so far. Gazans have fled by the thousands to the southern part of the territory while Israelis have set up plastic chairs on a mountain overlook to watch the bombs explode in Gaza as if they were fireworks.

In this way, Israel has entered the same murky moral territory that the United States entered during the conflicts in Kosovo and Libya. It is currently waging effectively risk-free warfare. Governments that don’t have to deal with public response to the deaths of either soldiers or civilians are freed of the conventional political calculus involved in prosecuting a war. Such a government may also be less willing to compromise, for there is no significant counterweight to military action, at least when it comes to aerial attacks.

So far, however, it’s been Hamas that has rejected the latest ceasefire, brokered by Egypt. Hamas has its reasons. It wants the release of its members who were rearrested in June after being set free in a deal in 2011. And it wants an end to the blockade that has turned Gaza into a virtual prison for its inhabitants. But Egypt’s deal didn’t reflect any of these concerns.

The major players continue to violate the most fundamental rule of conflict resolution: taking into consideration the underlying interests of all parties to the conflict. The problem goes back at least to 2006, when Hamas won an election that Israel and the United States failed to recognize.

Netanyahu still believes that he can bomb Gazans into changing their underlying interests. The real question is: how long will the Obama administration persist in supporting this delusion?