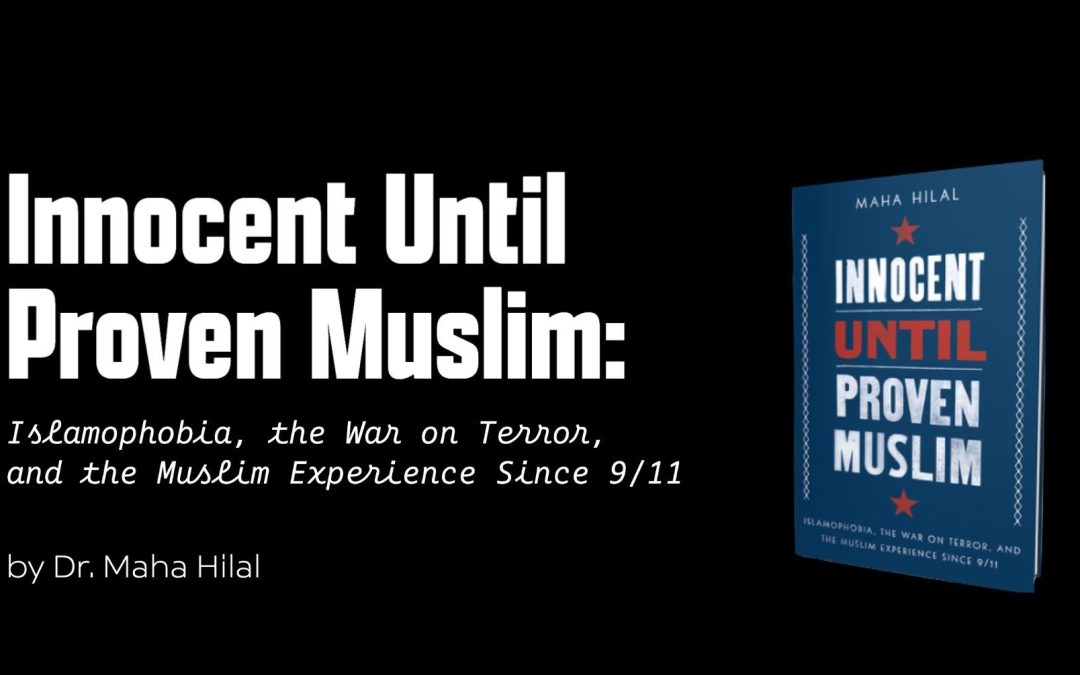 Innocent Until Proven Muslim: Islamophobia, the War on Terror, and the Muslim Experience Since 9/11, by Dr. Maha Hilal

Muslims and the War on Terror: Two-Plus Decades of ‘Othering’

The phrase “War on Terror” invokes many different feelings and images depending upon one’s position in America and the world. While many understand it merely as a descriptor for a new frontier in American foreign policy and war, for others it has meant a new set of violent interventions and disturbances to their way of life.

Last year’s somber reflections on the 20 years since 9/11 rarely engaged fully with the complexity and scope of the actions set in motion by American incursions into Afghanistan, Iraq, and multiple other countries in the years to follow.

While Rep. Barbara Lee did receive her “flowers” for her brave stance for urging restraint in the days after 9/11, and for being the sole member of either chamber of Congress to vote against the first Authorization of Military Force, the U.S. government itself has not been called to account for the human impact of its policy prescriptions and militaristic actions over the past two decades.

In Innocent Until Proven Muslim, author Maha Hilal clearly explicates the destruction caused to Muslim communities by the war on terror. Hilal provides countless examples across a range of policies and interventions that were used domestically and abroad to “fight terrorism.”

Bringing a unique perspective to these issues, Hilal systematically explores how the underlying doctrine of the War on Terror has proved remarkably durable — spanning 20 years and three different presidential administrations. She provides countless examples of how a wide range of violent policies and interventions, both domestically and abroad, were justified in the name of “fighting terrorism” and have since become institutionalized.

“The war on terror has allowed for the creation of an ever-expanding arsenal of anti-democratic policies and tactics, operating outside the reach of partisan politics and normal rules of international relations,” Hilal writes.

Hilal dives deeper into the practice of “targeting Muslims with impunity” with a thorough primer on legal and policy measures that may be unfamiliar, such as the 2008 Controlled Application Review and Resolution Program. The no-fly list itself derived from the terror watch list, an overly broad list used to monitor people — many of whom were arbitrarily added to the list often without notice.

Dr. Hilal’s book comes at a timely moment. In many ways the narrative framework developed at the outset of the war on terror parallels domestic attitudes around “public safety” that have been weaponized to justify police brutality, among other abuses. In both cases, an “ends justify the means” approach provides a  smokescreen for the real impact on people’s liberty and lives.

From an academic perspective, I understood the use of community focused anti-terrorism efforts as well as the parallels with criminalization of Black and other communities of color. Growing up in a radical Black household, I had no illusions of American exceptionalism and excellence. I knew the full impact of government attacks on Black movements for liberation and felt the continued presence of the surveillance state in our lives.

It’s also not a far stretch of imagination to see the connection between increased militarization abroad and the deployment of military tanks by local police departments against protesters challenging abuses of power at home. The American exceptionalism and white supremacy driving continued incursions abroad is reflected back to us in policies in cities across the country.

But knowing some of the components of a complex enterprise does not prepare one for the full breadth of what can be accomplished when all the moving parts come together. Hilal’s writing comes across as accessible for the layperson newly engaging with foreign policy but also offers much for the expert analyst looking for deeper conversation.

Telling the stories of what happened and the many ways in which humanity — and often even actual innocence — may have been disregarded is extremely important in helping to build a new path forward. While we cannot change what has happened, Hilal’s combination of storytelling and narrative shifting with vignettes from Muslims themselves offers a new lens for processing the impact of the war on terror.

The stories of Muslims targeted by this apparatus offer a stark contrast with the much softer approach taken to white extremists who’ve been accused of committing acts against the state, from plotting to kidnap a U.S governor to attacking the Capitol itself.

Between the lines of Innocent Until Proven Muslim is also the question of where constitutional rights begin and end for Muslims who challenge the American status quo.

In cases like that of Tarek Mehanna, an American-born Muslim who asserts he was targeted by the FBI after refusing to serve as an informant for the agency, rights seem to erode quickly. Another controversial topic — recognizing that people labeled as enemy combatants retained some legal rights — became a source of contention during the Supreme Court confirmation hearing of Judge Ketanji Brown Jackson.

But through Hilal’s exploration of multiple case studies of injustice in the criminal legal system, there is a clear concern emerging about the willingness of the state to set aside constitutional protections because a group of individuals is deemed unworthy of protection. As in the domestic context, the rush to over prosecute and reluctance to examine and remedy root causes of terror only furthers conflict and harm.

It is commonplace to associate the War on Terror primarily with militarism and warfare abroad —  and to lay the blame for the Islamophobic narratives that were used to justify these wars at the feet of the Bush administration. Some of the narrative devices softened under Obama, but the project of America remained constant regardless of party affiliation and personal promises of the leader in charge.

Many Americans were rightly outraged at the blatantly racist and xenophobic policies adopted during the Trump administration. Various iterations of the Muslim ban and hyperpolarization of “border control” deserve our collective ire. But Hilal shows how the groundwork, including the development of legal precedent, was laid by Trump’s predecessors. Trump’s exploitation of this machinery is another feature of the flawed system, not a bug.

Now with a new administration grappling with similar challenges of so-called security, the question remains: What lessons have been learned? And what, if anything, will be done with that knowledge? Ultimately, this is about the project of American empire, which doesn’t willingly yield ground to anyone deemed as “the other.”

Anoa J. Changa (@thewaywithanoa) is a lawyer, journalist, and organizer. She hosts The Way with Anoa podcast.