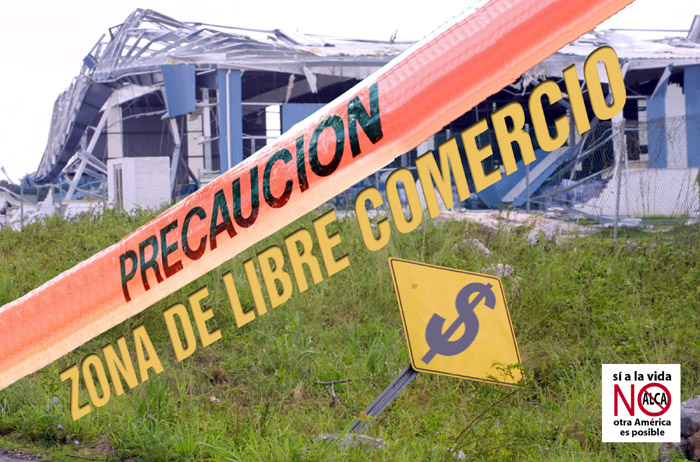 NAFTA and treaties like it grant transnational companies total freedom of movement for capital, goods, and services, coupled with the ability to sue countries in secret courts when governments attempt to get in their way. (Image: Hernán García Crespo / Flickr)

NAFTA at 20: A Model for Corporate Rule

Foreign Policy In Focus is partnering with Mexico’s La Jornada del Campo magazine, where an earlier version of this commentary appeared, to publish a series of pieces examining the impacts of the North American Free Trade Agreement (NAFTA) 20 years since its implementation. This is the third in the series.

Twenty years since the notorious North American Free Trade Agreement (NAFTA) went into effect, much has been written about its harsh impacts on workers and farmers across Mexico, the United States, and Canada. But NAFTA also rewrote the rules of international investment — and that may turn out to be its most insidious legacy of all.

NAFTA’s investment rules were ostensibly about ensuring that investors in the United States and Canada had a means to address conflicts with the government of Mexico, since the pact’s authors argued that the Mexican legal system was poor and corrupt.

But after a series of NAFTA lawsuits against both Mexico and Canada, it is apparent that the agreement’s investment dispute resolution process — a version of which has been included in thousands of subsequent international trade and investment treaties — is a powerful tool corporations can and will use to blackmail states out of implementing more socially and environmentally responsible policies.

Chapter 11 of NAFTA not only deregulated the movement of capital and facilitated the relocation of production across borders; it also included a powerful investor-to-state dispute settlement system (ISDS) that let multinational corporations directly enforce their ample protections under the agreement. These protections include so-called minimum standards of treatment and a prohibition on “indirect” expropriation of existing or future investments.

ISDS cases consist of claims by North American investors from one country against a decision, policy, law, or regulation in any other that the investor believes to have violated NAFTA investment protections. Effectively, this dispute settlement process has allowed companies or investors to force democratically elected governments to account for public policy decisions before investment arbitration panels like the one at the World Bank’s International Center for Settlement of Investment Disputes (ICSID).

For example, if a government implements a labor or environmental regulation that a multinational corporation doesn’t like, even if the regulation is legal and applied to all companies equally, that corporation can nonetheless sue for damages at the World Bank.

Canada and Mexico have so far been the biggest losers in this scheme. The U.S. government has faced several Chapter 11 lawsuits but has not lost a case. But all three countries have had to pay huge sums in legal costs, or in fees paid to arbitration courts. In all cases, the losers are ordinary citizens, because the money to placate corporations and pay these expenses comes from the public purse. And forever more, policymakers will have to think twice about passing any law to protect the public from corporate excesses.

Mexico has lost at least five disputes under Chapter 11, totaling more than $200 million in penalties, and many more cases may result from the privatization of mining concessions in the country. According to the Mexican Ministry of Economy, today there are 857 mining projects planned or in operation — of which two thirds are destructive gold and silver operations, which can badly pollute soil and drinking water. Any future legislation to halt or curb any of these projects could incur a claim under NAFTA rules, since the great majority of foreign mining companies in Mexico are of U.S. or Canadian origin.

Indeed, as the Institute for Policy Studies noted in the report “Mining for Profits in International Tribunals,” extractive industries are increasingly using investment protection rules under free trade or bilateral investment agreements to sue governments when public resistance, environmental assessments, or legal decisions interfere with destructive mega-projects. More than half of these ISDS cases, under NAFTA and other agreements, have been filed against Latin American countries. (Mexico itself has so far avoided this fate, since its government is notoriously permissive about issuing operating permits to extractive industries, but the rules don’t make finding the political will to resist them any likelier.)

The government of Canada, meanwhile, has lost or settled five NAFTA Chapter 11 cases, totaling over $157 million in compensation paid to foreign companies. Billions of dollars remain in dispute.

Two recent cases are instructive. In the first, Lone Pine Resources is asking for $250 million to compensate investors for Quebec’s publicly supported partial moratorium on fracking for natural gas under the St. Lawrence River. In the second, Eli Lilly is demanding $500 million for twice failing Canada’s more stringent test for proving a patent’s utility, resulting in the company losing patents (albeit at the end of their lifespans) for blockbuster anti-depression drugs. The Eli Lilly case is a direct attack on the independence of Canadian courts, and the Lone Pine Resource case wages war on the ability of Canadians to protect their environment.

Chapter 11 has served as a model for more than 3,000 bilateral investment treaties existing today. Many of them are contained under other free trade agreements, and the number of investor-state cases is soaring rapidly. There are today at least 500 pending corporate lawsuits against government decisions, and corporations are continually discovering how to use the ISDS to extract huge sums from public treasuries without even having to make tangible investments.

The “chilling effect” that these rules put on governments is now undeniable. The mere threat of an investment lawsuit can be enough to discourage new public interest legislation that could interfere with a corporation’s expected profits.

The effect on development is also pronounced, forcing local governments to give “national treatment” to multinational companies when they might prefer to support local small- and medium-sized businesses. Supporters will call this “leveling the playing field,” but the reality is that NAFTA has created an extremely imbalanced set of rules that favor multinational investors but ask nothing of them in return. Requirements, for example, that a multinational company in a certain jurisdiction agree to operate for a certain period of time, or source a portion of its inputs locally, have been prohibited as illegal “performance requirements” by NAFTA. Chapter 11 therefore created a set of rights, but no responsibilities, for foreign investors and corporations.

In many ways, NAFTA is more of a corporate power grab than a trade agreement, and nowhere is this more obvious than in its investment chapter. NAFTA and treaties like it grant transnational companies total freedom of movement for capital, goods, and services, coupled with the ability to sue countries in secret courts when governments attempt to get in their way.

The failure of this monolithic model is obscured by the boosterism of all three NAFTA governments, but this failure is increasingly apparent to the growing number of people who are challenging the expansion of corporate trade rules through transpacific and transatlantic free trade and investment agreements. The outcome of this new fight is uncertain. With courage and perseverance, we may one day be able to roll back the NAFTA legacy and introduce new ways of trading and investing that make the health and wellbeing of people and our planet their primary objectives.

Until then, we’re stuck with a model that puts corporations first and gives secret courts the last word.

Manuel Pérez Rocha is a Mexican national and an associate fellow at the Institute for Policy Studies in Washington, D.C. Stuart Trew is the trade campaigner for the Council of Canadians. They are both contributors to Foreign Policy In Focus.