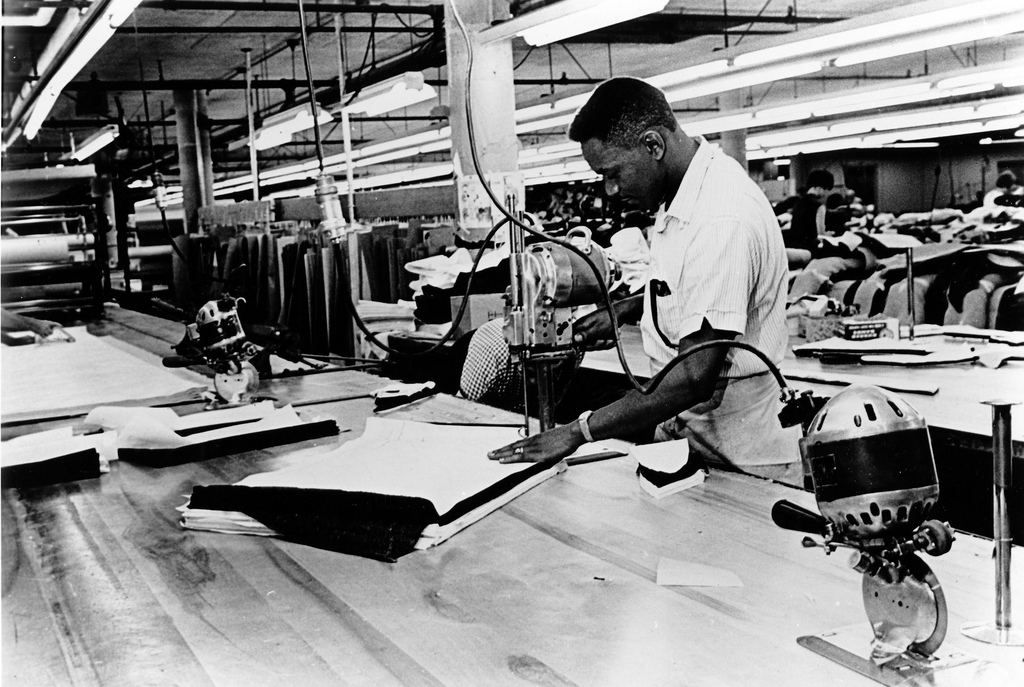 20 years later the verdict is in: the North American Free Trade Agreement (NAFTA) has been a disaster for workers on both sides of the U.S.-Mexico border. (Image: Kheel Center / Flickr)

NAFTA at 20: State of the North American Worker

Twenty years since its passage, NAFTA has displaced workers on both sides of the U.S.-Mexico border, depressed wages, weakened unions, and set the terms of the neoliberal global economy.
By Jeff Faux | December 13, 2013

Foreign Policy In Focus is partnering with Mexico’s La Jornada del campo magazine, where an earlier version of this commentary appeared, to publish a series of pieces examining the impacts of the North American Free Trade Agreement (NAFTA) 20 years since its implementation. This is the first in the series.

The North American Free Trade Agreement, or NAFTA, was the door through which American workers were shoved into the neoliberal global labor market.

By establishing the principle that U.S. corporations could relocate production elsewhere and sell their products back into the United States, NAFTA undercut the bargaining power of American workers, which had driven the expansion of the middle class since the end of World War II. The result has been 20 years of stagnant wages and the upward redistribution of income, wealth, and political power.

A Template for Neoliberal Globalization

First, it caused the loss of some 700,000 jobs as companies moved their production to Mexico, where labor was cheaper. Most of these losses came in California, Texas, Michigan, and other states where manufacturing is concentrated  (and where many immigrants from Mexico go). To be sure, there were some job gains along the border in the service and retail sectors resulting from increased trucking activity. But these gains are small in relation to the losses, and have generally come in lower paying occupations. The vast majority of workers who lost jobs from NAFTA, therefore, suffered a permanent loss of income.

Second, NAFTA strengthened the ability of U.S. employers to force workers to accept lower wages and benefits. As soon as NAFTA became law, corporate managers began telling their workers that their companies intended to move to Mexico unless the workers lowered the cost of their labor. In the midst of collective bargaining negotiations with unions, some companies even started loading machinery into trucks that they said were bound for Mexico. The same threats were used to fight union organizing efforts. The message was: “If you vote to form a union, we will move south of the border.” With NAFTA, corporations also could more easily blackmail local governments into giving them tax breaks and other subsidies, which of course ultimately meant higher taxes on employees and other taxpayers.

Third, NAFTA drove several million Mexican workers and their families out of the agriculture and small business sectors, which could not compete with the flood of products—often subsidized—from U.S. producers. This dislocation was a major cause of the dramatic increase of undocumented workers in the United States, putting further downward pressure on North American wages, particularly in already lower-paying labor markets.

Fourth, and ultimately most importantly, NAFTA created a template for the rules of the emerging global economy, in which the benefits would flow to capital and the costs to labor. Among other things, NAFTA granted corporations extraordinary protections against national labor laws that might threaten profits, set up special courts—chosen from rosters of pro-business experts—to judge corporate suits against governments, and at the same time effectively denied legal status to workers and unions to defend themselves in these new cross-border jurisdictions.

The U.S. governing class—in alliance with the financial elites of its trading partners—applied the NAFTA principles to the World Trade Organization, to the policies of the World Bank and IMF, and to the deal under which employers of China’s huge supply of low-wage workers were allowed access to U.S. markets in exchange for allowing American multinational corporations to invest there. The NAFTA doctrine of socialism for capital and free markets for labor also drove U.S. policy in the Mexican peso crisis of 1994-95, the Asian financial crash of 1997, and the global financial meltdown of 2008. In each case, the U.S. government organized the rescue of banks and corporate investors while letting the workers fend for themselves.

A Watershed in U.S. Politics

In U.S. politics, the passage of NAFTA under President Bill Clinton signaled that the elites of the Democratic Party—the “progressive” major party—had accepted the reactionary economic ideology of Ronald Reagan.

A “North American Accord” was first proposed by the Republican Reagan in 1979, a year before he was elected president. A decade later, his Republican successor, George H.W. Bush, negotiated the final agreement with Mexico and Canada.

At the time, the Democrats who controlled Congress would not approve the agreement. And when Democrat Bill Clinton was elected in 1992, it was widely assumed that the political pendulum would swing back from the right, and that therefore NAFTA would never pass. But Clinton surrounded himself with economic advisers from Wall Street and in his first year pushed the approval of NAFTA through the Congress.

Despite the rhetoric, the central goal of NAFTA was not “expanding trade.” After all, the United States, Mexico, and Canada had been trading goods and services with each other for three centuries. NAFTA’s central purpose was to free American corporations from U.S. laws protecting workers and the environment. Moreover, it paved the way for the rest of the neoliberal agenda in the United States: the privatization of public services, the regulation of finance, and the destruction of the independent trade union movement.

The inevitable result was to undercut the living standards of workers all across North America: Wages and benefits have fallen behind worker productivity in all three countries. Moreover, despite declining wages in the United States, the gap between the typical American and typical Mexican worker in manufacturing remains the same. Even after adjusting for differences in living costs, Mexican workers continue to make about 30 percent of the wages that workers make in the United States. Thus, NAFTA is both symbol and substance of the global “race to the bottom.”

Here in North America there are two alternative political strategies for change.

One is repeal: NAFTA gives each nation the right to opt out of the agreement. The problem is that by now the three countries’ economies and populations have become so integrated that dis-integration could cause widespread dislocation, unemployment, and a substantial drop in living standards.

The other option is to build a cross-border political movement to rewrite NAFTA in a way that gives ordinary citizens rights and labor protections at least equal to the current privileges of corporate investors. For example, all three NAFTA nations should adopt similar high standards for the protection of free trade unions, collective bargaining, and health and safety—and their citizens should have the right to sue other countries for violations.

This would obviously not be easy. But a foundation has already been laid by the growing collaboration among immigrant, trade unionist, human rights, and other activist organizations in all three counties.

If such a movement could succeed in drawing up a new continent-wide social contract, North American economic integration—instead of being a blueprint for worker exploitation—might just become a model for bringing social justice to the global economy.

Jeff Faux is the founder, and now Distinguished Fellow, of the Economic Policy Institute in Washington DC. His latest book is The Servant Economy.