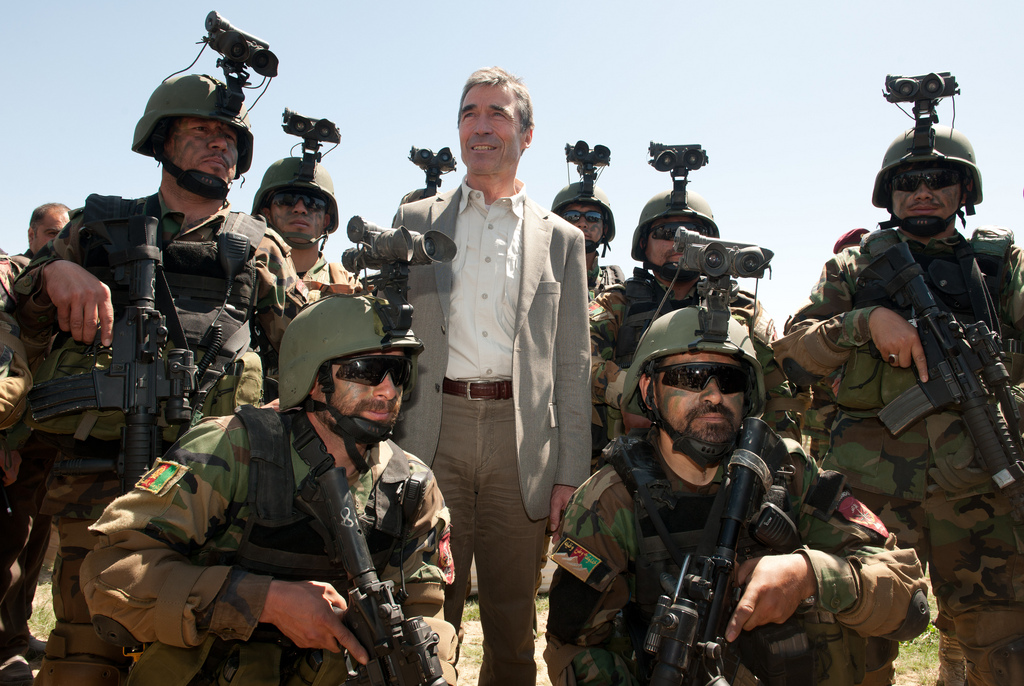 NATO Secretary General Anders Fogh Rasmussen takes a photo with Afghan Special Forces. Even with new tensions between Russia and the West, the alliance may have well outlived its purpose. (Photo: ISAF Media / Flickr)

At 65, NATO should get off its new meds and act its age. It’s time for downsizing and memoir-writing, not hanky-panky in the east.
By John Feffer | April 9, 2014

The North Atlantic Treaty Organization just hit 65. That’s retirement age, especially for an alliance structure that was born, grew up, and prospered during a bygone era. The war in Afghanistan is winding down. European countries are, by and large, reducing their military spending. The United States is theoretically engaged in a pivot to the Pacific.

NATO should be getting the message. Someone in Brussels should be ordering a big cake, compiling the festschrift, preparing golden parachutes for the top brass, and getting the “mission accomplished” banner printed up. Maybe there’s a retirement community for military alliances somewhere in Florida. Some underling in the NATO bureaucracy should find out the current whereabouts of the Warsaw Pact and SEATO and see if there’s a spot open in the adjoining condo.

The problem is: NATO has long resisted retirement. It has been cooking up new mandates ever since the Iron Curtain unexpectedly melted away and with it the alliance’s raison d’etre. First it rediscovered its military mojo during the collapse of Yugoslavia. Then it got involved in “out-of-area operations.” September 11 offered a full-blown coalition effort in Afghanistan. And Libya was an opportunity to test out the “responsibility to protect” doctrine. Every time that NATO appeared to be on its way out, a new crisis convinced everyone of the alliance’s necessity. And there has also been a steady stream of aspiring members who want to shelter under the umbrella in case of rain.

Five years ago, when NATO was celebrating its 60th anniversary, I wrote a brief for early retirement. The Afghan campaign was a failure on the ground, and it was driving a wedge between Washington and its European partners. The EU was considering beefing up its own independent military capabilities. And the more ambitious of NATO’s projects—“going global” by inviting in partners around the world—was looking increasingly untenable.

During its Cold War youth, NATO didn’t engage in military operations. In the post-Cold War era, when the collective defense of members had become largely moot, NATO justified its existence through combat. “It is still struggling with a Hamlet-like identity crisis: to attack or not to attack,” I wrote at the time. “The Afghan war has only underscored this central paradox. If the alliance doesn’t engage in military operations, everyone questions its ultimate purpose. But if it does go to war—and the war is unsuccessful—everyone questions its ultimate efficacy.”

Five years later, just when the testosterone levels seemed to be on an irreversible decline, NATO is back. The current crisis in Ukraine is the geopolitical equivalent of Viagra. “This is the age where giving up isn’t who you are,” the ads proclaim, and NATO has fallen for the copywriter’s hook.

There’s some disagreement over who slipped the pills into NATO’s medicine cabinet. I judge it to be a team effort, with the United States and Russia in a good doctor/bad doctor combo. The United States has urged NATO to get out more, court new friends, consider new relationships, become more expansive. Russia, clearly upset with this course of treatment, has favored a surgical intervention—on another patient entirely—to get NATO back up on its feet. And suddenly, NATO has returned to the preoccupations of its youth: staring down alpha males and providing collective security to the flock.

As part of this regeneration, NATO will also be getting a transfusion of new blood. Former Norwegian Prime Minister Jens Stoltenberg, the new secretary general who will be taking over in the fall, is perhaps an odd pick. He was once quite lukewarm about NATO, participated in anti-nuclear campaigns, and long ago threw rocks at the U.S. embassy in Oslo during anti-Vietnam War protests. He has since become considerably more mainstream in his positions. But he’s still a diplomat at heart, not a militarist. Maybe he can reinvent the alliance?

Consider how he might handle the deepening divide between Russia and NATO over Ukraine. “The current secretary general has adopted a hawkish response to the burgeoning confrontation with Russia,” writes Foreign Policy In Focus contributor Ian Davis. “But when the alliance seeks to mend relations with Moscow—as it surely must at some point—Stoltenberg may be an invaluable mediating voice. As a former prime minister, he has strong international networks, well-developed skills as an international negotiator, and friendly ties with Moscow. For instance, he negotiated a deal with Russia in 2010 that ended a four-decade Russia-Norwegian dispute over their Arctic maritime borders and thereby built a friendship with then-president Dmitry Medvedev.”

At the moment, NATO has no obligation to come to Ukraine’s aid if it is attacked, though some voices in Eastern Europe, like Czech President Milos Zeman, are urging the alliance to reconsider if Russia moves into eastern Ukraine. Kiev, meanwhile, has been careful not to hand Moscow any easy justifications. It has asked NATO for non-lethal supplies, not weaponry, and has emphasized that the country’s laws emphasize its non-bloc status. The hawks in the United States are pushing for a clear path to be opened up for Ukraine to join NATO; realists like Henry Kissinger want membership off the table. It pains me to say it, but Kissinger is right. It would be wise if Ukraine and NATO continued to maintain a low-level connection, but they should definitely not consummate their relationship.

Until the Ukraine crisis broke, Europe was on a clear downward trajectory in its military spending (with one or two exceptions like Poland). “We live in a different world than we did less than a month ago,” current NATO head Anders Fogh Rasmussen said. “I am the first to stress that Europe must do more.” Doing more means spending more. NATO wants its members to spend at least 2 percent of gross domestic product on their militaries. The NATO average last year was 1.6.

Geopolitics abhors an exception. Instead of emulating Japan’s “peace constitution,” the United States has been pressing the country to acquire a “normal” military. Instead of embracing the reductions in military spending in Europe, the United States has been pushing NATO members to “shoulder more of their burden.” We need to be praising European countries for their sensible military reductions and urging other parts of the world to follow suit. Next week on April 14, participants in the fourth Global Day of Action on Military Spending (GDAMS) will be doing just that. Find an action near you—or get out there and organize an action of your own—and tell world leaders that we’re still spending too much on our militaries when there are so many more urgent issues to address.

As for NATO, it’s important that Russian President Vladimir Putin gets the message: the more he meddles in Ukraine, the friskier the transatlantic alliance will behave. Again, Ukraine has responded with admirable restraint in dealing with the small band of pro-Russian demonstrators in its eastern territories. Once we get through this Ukraine crisis without further escalation—preserving the country’s current territorial integrity and holding free and fair presidential elections in late May—NATO should get off its new meds and act its age. It’s time for downsizing and memoir-writing, not hanky-panky in the east.