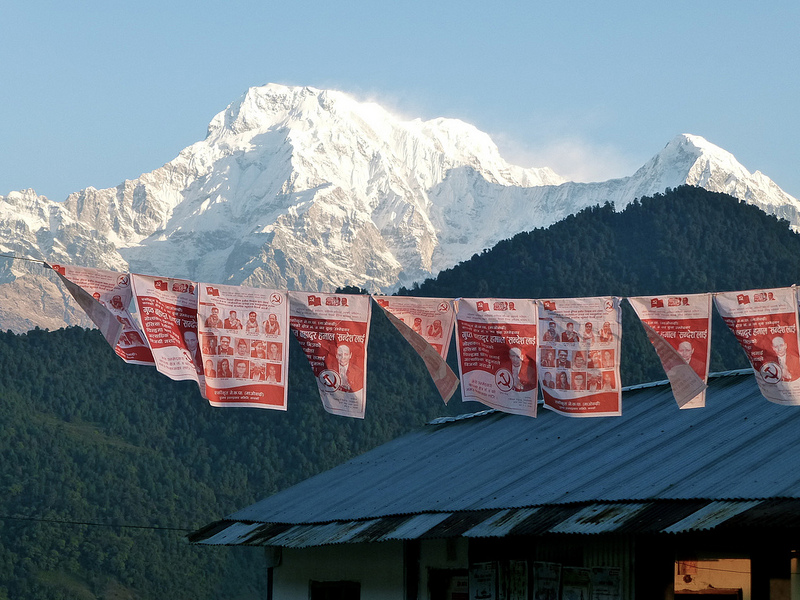 Nepal Goes to the Polls

Nepal, a strategically located country on the southern flank of the central Himalayas between India and China, has finally caught election fever.
By Deepak Adhikari | November 19, 2013

On a recent morning, dozens of men and women gathered in a small playground in Kathmandu to listen to Prakash Man Singh, a leader of the main opposition Nepali Congress (NC) and a candidate from a coveted constituency in the nation’s capital.

Son of a legendary NC leader and former cabinet minister, Singh harped on the values of liberal democracy his party espouses and asked the people to elect his party to a majority in Nepal’s 601-member assembly. He blamed the recent failure to produce the country’s first democratic constitution on the Maoist party, which launched an insurgency in the spring of 1996 before joining the political mainstream in 2006 and becoming the largest party in the last assembly.

Just a few meters away, supporters of his rival candidate were busy pasting posters and painting graffiti. Renu Dahal, the daughter of Maoist chairman Pushpa Kamal Dahal, better known by his nom de guerre Prachanda, is mounting an aggressive electoral campaign. Less than a kilometer away from the playground, her party’s office greets the visitors with a banner of photographs of communist pantheon—Marx, Engels, Lenin, Stalin and Mao. A revolutionary song blares from the tiny roadside office.

Singh and Dahal are both the scions of political families—a common feature of South Asian politics. But their parties stand far apart in the country’s political spectrum. Inspired by Chinese Communism during its formative stage, the Maoists have now morphed into social democrats and still identify with a sizeable section of Nepal’s marginalized communities. The NC, on the other hand, embraces liberal democratic values and enjoys a base of support among the middle class and urbanites.

Nepal, a strategically located country on the southern flank of the central Himalayas between India and China, has finally caught election fever. On November 19, the young republic is holding an election to a new Constituent Assembly after the first assembly of this kind, elected in 2008, failed to deliver a constitution and lapsed in May 2012.

The last assembly failed to deliver a constitution not because of the ideological differences between the Maoists and the liberal democrats. The major sticking point was the type of federalism that these two parties envision. Nepal is home to over 100 ethnic groups, and the Maoists argue that the country should be federated into a dozen or so states along ethnic lines. The NC and Unified Marxist-Leninist party (the third largest party, with a Communist name but a centrist ideology) say such a move would trigger ethnic conflicts. They advocate federalism based on economic viability and massive decentralization of power.

After the loss of over 16,000 lives in the decade-long war that ended in 2006 with the signing of the Comprehensive Peace Agreement between the government and the Maoist rebels, the country has largely remained peaceful. But political instability—the country has seen five governments since the 2008 elections—has pushed Nepal into crisis and impeded reconstruction of infrastructure damaged during the war. Despite the much ballyhooed slogan of “New Nepal” after the fall of monarchy in 2008, the country still ranks as one of the lowest in the world in terms of poverty and human development indicators.

Nepalese yearn for lasting peace and economic development. But the politicians have their own interests. “They persist with the narrow aim of acquiring the state power. And they achieve that by giving false hopes and promises to the people,” says Nepalese political scientist Dhruba Kumar. “Our politicians are keen to be in power not only to misuse the national treasury but also to pilferage the loans and aids granted by foreign countries and donors. This way they can amass property for generations to come and rest assured.”

And because their source of income is not the voters but external powers—the country’s two big neighbors, India and China—says Kumar, “they never become accountable to the citizens.” He adds: “Also, the elections help them achieve legitimacy in the eyes of international powers.”

The politicians seeking legitimacy may have their strongest foe in a Maoist faction that split from the original party in June last year. The Communist Party of Nepal-Maoist (CPN-M) has boycotted the polls, calling the interim election government headed by the chief justice of the Supreme Court “unconstitutional.” It has threatened to use violence to disrupt the polls. The group has engaged in arsons and attacks on the candidates.

Many political commentators believe the major political parties deliberately sidelined the CPN-M from the elections, terming them extreme leftists. “This is damaging to the politics of national consensus that the leaders claim to have tried to forge,” says Kumar, who is now a retired professor of political science.

The major concern in Nepal revolves around whether or not the new assembly will be able to write a constitution. The new assembly will likely be as fragmented as the previous one, and none of the coalitions will have the required two-thirds majority for the promulgation of the constitution. Despite some incidents of violence by the poll-boycotting parties, the country may have a newly elected assembly. But it is almost sure that a new constitution will not be forthcoming unless the parties come up with innovative ideas to settle the vexing problems facing the Himalayan nation.

Geopolitical dynamics have certainly been at play in Nepal’s elections. One of the factors that led to the assembly’s collapse was mounting pressure from Nepal’s two neighbors, both of whom wanted to have fewer federal states in their backyards. India didn’t want more than two states in southern Nepal bordering its two big northern states, and China feared that several autonomous states bordering Tibet would provoke the already volatile “roof of the world.”

After the opposition parties declined to go to polls under a Maoist government led by ideologue Baburam Bhattarai last year, the four major parties agreed on an election government headed by the country’s chief justice. Since the formation of this government in March last year, both India and China have urged the people to vote to end the political deadlock. Indeed, now both countries have lent their support to the November polls. On November 13, India provided 764 vehicles for use during the elections. Not to be outdone, the Chinese supplied more than a million dollars in election materials. With both neighbors backing the polls, despite the escalation of violence by the anti-poll groups, the elections will go ahead.

Deepak Adhikari
Deepak Adhikari is a Kathmandu-based journalist and contributor to Foreign Policy In Focus. His stories have appeared in Time magazine, the Pittsburgh Post-Gazette, OpenDemocracy, and other outlets. You can read more of his work on his blog.