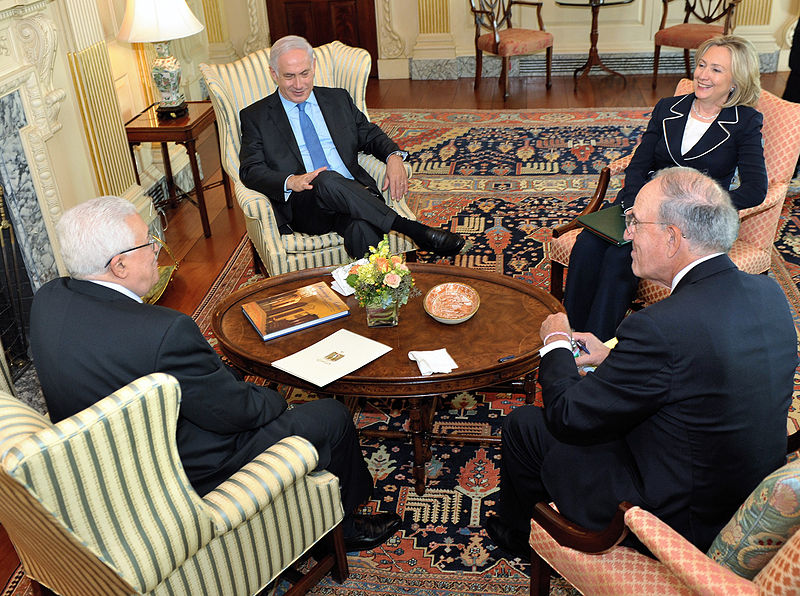 Netanyahu vs. the Spooks

Right-wing Israeli politicians like to boast about their country’s famed intelligence service, but they've gotten good at ignoring it when it tells them things they don't want to hear.
By Carl Bloice | January 21, 2014

Israeli politicians like to boast about their country’s famed intelligence service, long thought to be the most sophisticated in the Middle East.

Writing in the Los Angeles Times last November, for example, Israel’s outgoing U.S. ambassador Michael Oren bragged that the country’s “renowned intelligence community” had accurately predicted that the Arab Spring “would be hijacked by Islamic radicals” and that “years of brutal civil strife” would ensue.

Oren went on to declare that “when formulating policies vital to Israel’s survival, the prime minister consults with Israel’s renowned intelligence community, a robust national security council and highly specialized units of the Israel Defense Forces.” Then, cognizant of the Obama administration’s apparent willingness to sideline Israel to make peace with Iran, Oren got to the point: “Netanyahu may at times appear to stand alone on Iran, but he is backed by a world-class body of experts.”

Of course, Israeli politicians—like their U.S. counterparts and politicians all over the world—like to claim that they have the facts on their side. Just what Israeli intelligence agents have told the Israeli government last fall with regards to the overall political upheaval underway in the Middle East, the U.S.-sponsored peace talks with the Palestinians, or Iran is unclear. But there are strong hints out there that right-wing Israeli politicians are making it up as they go along.

About a month after Oren’s comment appeared, J.J. Goldberg, editor-at-large of the U.S. Jewish community newspaper The Forward, appeared to dispute Oren’s assertions. “Tensions between Israel’s political leadership and intelligence professionals appear to have returned to the state of open warfare that prevailed before 2011, judging by the noises coming out of the two camps,” he wrote. “The issue, once again, is Iran.”

“Tensions have been simmering under the surface since shortly after Prime Minister Benjamin Netanyahu took office in 2009, periodically bursting into the open,” Goldberg explained last December. “The latest round of trouble can be dated to late September, when the chief of military intelligence, Major General Aviv Kochavi, submitted a report to the prime minister detailing the ‘significant,’ ‘strategic’ political changes taking place inside Iran under its new president, Hassan Rowhani. The report noted that Rowhani had been elected by an outright majority, against the wishes of supreme leader Ayatollah Ali Khamenei, on a platform of repairing ties with the West and ending sanctions.”

Needless to say, Netanyahu did not share this view. “Days after receiving the report,” Goldberg reported, “Netanyahu flew to the United States and delivered a stinging, hard-line speech to the United Nations General Assembly, scoffing at the idea that change was underway and calling Rowhani a ‘wolf in sheep’s clothing.’”

Kochavi’s report is said to have been delivered to Netanyahu’s security cabinet November 26 at the headquarters of the country’s chief intelligence agency, the Mossad. It was later leaked to the newspaper Haaretz and detailed in reports in the daily Yedioth Ahronoth.

“The spooks’ view was largely upbeat,” Goldberg reported. “The chaotic aftermath of the Arab spring has tied up Israel’s most dangerous neighbors in internal troubles, leaving them in no position to confront Israel in the foreseeable future.” Moreover, with the recent interim accord over Tehran’s nuclear enrichment program, “Iran’s nuclear project has been frozen in place for six months, halting a decade of steady growth and buying time for America and the allies to attempt a permanent agreement that keeps Iran verifiably short of nuclear weapons capability.” And finally, “America, despite the public’s war-weariness, is unlikely to disengage from the Middle East, given the continuing importance of oil. And Hamas and Hezbollah, while worrisome, face their own external threats — Sunni jihadists in Lebanon, the Egyptian military regime to Hamas’s south — that make them unlikely to seek trouble with Israel in the near term.”

However, what Goldberg called “a closed circle of hard-line politicians, ideologues and think-tankers surrounding Netanyahu” summarily dismissed this assessment, instead propagating the paranoid delusion that the Obama administration was inclined to let Iran go nuclear.

Serious differences between the Israeli intelligence apparatus and the Netanyahu inner circle were again on display at the beginning of the New Year in the controversy surrounding the Jordan Valley.

As the year began, a campaign was underway to get the Knesset to pass a bill to annex the settlements containing 6,000 or more colonial settlers in the occupied Jordan Valley. Most of the valley, which falls entirely within the occupied West Bank, is under full Israeli military control. The bill has been endorsed by eight of the 11 members of the Prime Minister’s Ministerial Committee on Legislation, which voted in favor of the bill last December.

Palestinians regard the Jordan Valley proposals as an encroachment on their sovereignty and have requested an international force be stationed in the area to guarantee security. Palestine Authority President Mahmoud Abbas has said “this is, as far as we are concerned.” One report says the Palestinians suggested the possibility of a U.S. military force in the valley—an idea the Israelis are said to have quickly shot down.

“Security must remain in our hands,” Israel’s intelligence minister Yuval Steinitz recently told Israeli public radio. “Anyone who proposes a solution in the Jordan Valley by deploying an international force, Palestinian police, or technological means,” he insisted, “does not understand the Middle East.”

On the occasion of a December ceremony marking the expansion of a new settlement in the Jordan Valley, Gideon Sa’ar, a member of Netanyahu’s cabinet, told Ha’aretz, “There is a message we’re sending, and it’s that there is a consensus among the Israeli public that our presence here in the Jordan Valley is not a temporary one. The development of this area over two generations has enjoyed support by governments led by both Likud and Labor.”

“Our statement is clear. The Jordan Valley is Israeli and the Jordan Valley will stay Israeli. Our eastern border must be the Jordan River,” Sa’ar went on, adding that if Israel didn’t keep control of the area, “the Jewish state will lack ‘strategic depth’ necessary for its survival.”

It turns out that not everybody agrees with that assessment.

The Jordan Valley is not “essential” for Israel’s security, said former Mossad director Meir Dagan earlier this month. “I don’t like the ongoing argument about the Jordan Valley as an essential element to the security of Israel,” he added, calling it “manipulation and utilization of security considerations.”

There has been a clear pattern in the dealings of the right-wing Netanyahu government with the Obama administration.

Each time a note of optimism creeps into the story of U.S. Secretary of State John’s Kerry’s efforts to put together the basis for a Middle East peace agreement, someone in the governing Likud coalition attempts to change the subject. (Witness the prime minister’s recent absurd suggestion that peace is possible only if there are changes in the wording of textbooks used in schools in the occupied West Bank.) Netanyahu is now said to have told supporters that he will not accept any reference to Jerusalem in the framework agreement being drafted, or agree to a document that suggest the establishment of a Palestinian capital anywhere in Jerusalem.

This month, the Netanyahu government did it again. On January 10, the Housing Ministry announced plans for 1,400 new housing units in settlements in the West Bank and in East Jerusalem. The U.S. State Department called the building plan “not conducive to our efforts to move forward on peace,” and UN Secretary General Ban Ki-moon said he was “alarmed” by Israel’s plans. “Such activity is not only illegal but also an obstacle to peace,” he said.

Like the floating of the Jordan Valley proposal, this latest provocation doesn’t seem to fit with any recommendation of the Israeli intelligence community, but it does reflect the outlook of right wingers in the Likud. The differences are starting to surface even within the governing coalition, where sober warnings are beginning to emanate from Netanyahu’s own partners.

Justice Minister Tzipi Livni—a former intelligence agent herself—said last month that “the settlements are not part of Israel’s security, they are hurting it.” Livni, a Hatnuah Party member who is officially in charge of Israel’s peace talks with the Palestinians, lashed out at those she said “are happy whenever they can say that there is no peace partner,” so they tell us “do not even try.” She added that the same people say that “even if there was a partner we should not give up one meter of land, because they are not really ready for any compromise.” Such agitators, Livni charged, “use ‘security’ as an excuse to convince the public that there is no option” for peace.

Some observers think Netanyahu is only trying to appease his right flank as talks continue. “If construction were Bibi’s only negative signal, the sop-to-the-right argument might make sense,” wrote The Forward’s Goldberg. “But it’s just one in a series.”

Goldberg concluded, “it looks like Bibi has given up trying and is now opting for Plan B: telling Europe, America and the rest of the world to go to hell. On a practical level, he seems to be doing everything he can to short-circuit the talks, blame or no blame.”

If the talks fail, there will be plenty of blame to go around. But Netanyahu won’t be able to say no one tried to tell him better.

Carl Bloice
Foreign Policy In Focus columnist Carl Bloice, a member of the National Coordinating Committee of the Committees of Correspondence for Democracy and Socialism, writes for the Black Commentator. He also serves on its editorial board.