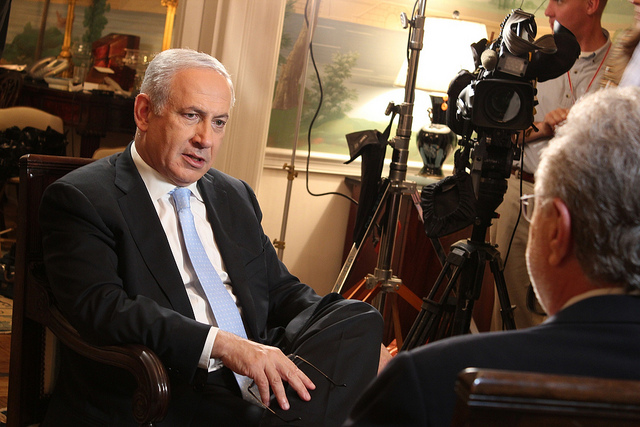 Netanyahu’s Victory Is Just as Bad as It Looks

The only silver lining to the Israeli prime minister's surprisingly strong reelection victory is that Washington and Brussels might finally get fed up with him.
By Mitchell Plitnick | March 18, 2015

Israeli Prime Minister Benjamin Netanyahu has scored a dramatic victory, far outpacing the pre-election and exit polls. The consequences for Israelis, Palestinians, and the rest of the world could be very grave.

This surprising result undoubtedly came about because of some combination of the pollsters simply being wrong and Netanyahu’s last-minute tactics, which included some blatant racism as well as an appeal to voters to block the possibility of a government led by the center-left Zionist Union. But the why is less important than the results.

Although coalition negotiations could drag on for days, they could also conclude fairly quickly, as it seems clear what the composition of the next governing coalition will be. Likud will dominate, with almost as many Knesset seats as they won in the last election, along with the hardline Israel Beiteinu party of Avigdor Lieberman. In order to seal the deal, Netanyahu will need Moshe Kahlon’s center-right Kulanu party, which will be the most moderate party in the new government.

Kahlon may hold Netanyahu hostage for a while, but he is almost certain to eventually agree to join. Naftali Bennett and his Jewish Home party have already connected with Netanyahu. Bennett was the big loser in this race, largely because Netanyahu went even further right, occupying a lot of Bennett’s political terrain (pun intended). Add in the two ultra-orthodox parties (Shas and United Torah Judaism) and Lieberman’s party, which also lost big due to a massive wave of scandals that hit them over the past months, and Netanyahu looks to have 66 or 67 seats. His majority will be composed entirely of the right and center-right.

Despite one blunder after another in this campaign, Netanyahu scored a smashing victory that no one saw coming. In the end, his strategy of fighting off his right flank and believing that Israel would not vote the center-left into power paid off. He gutted Bennett’s party as right-wing voters, surely panicked at the thought of the Labour Party’s Isaac Herzog in the Prime Minister’s Office, voted Likud instead of Jewish Home.

So, with a right-wing coalition in place, will Netanyahu no longer have to prove his ultra-right, tough-guy bona fides? Some may be hoping so, but it seems unlikely.

The election surely proved to Bibi, once and for all, that his future challengers will come from the right, not the current opposition. His coalition will not only support his belligerence but will push him to sustain it. That is not going to sit well in Washington or Brussels.

Netanyahu will probably quit pulling the flashier stunts to try to torpedo a nuclear deal with Iran, but he is likely to continue his efforts. He will encourage congressional Republicans from afar, with statements to the press and in speeches in Israel, rather than on Capitol Hill. Although it may be too late to rally enough Democrats to overcome a veto by President Obama of a new sanctions bill, the real fight for Obama is going to be selling a deal to the American public.

That’s where the more hawkish Democrats will come to the fore. Netanyahu will certainly keep up his anti-deal rhetoric, and he will not let up for a moment. There will be no significant voice in Israel expressing concern about the continuing rupture with the White House. The opposition is likely to be even quieter than it has been up until now.

None of this represents a real change from conditions before the election, of course. The only lingering question for Netanyahu is whether the sharp drop in the polls he experienced reflects real public concern about his handling of the controversy over his speech before Congress. It very likely did, so Netanyahu will opt for less dramatic tactics.

If things looked hopeless before for any kind of diplomacy, they’re absolutely dismal now. Netanyahu is sure to come up with some sort of double-talk to “explain” that he didn’t really mean to disavow the two-state solution, as he clearly did during the campaign. But he won’t walk it back too far, as even the parties in his likely new coalition who want to see talks resume (Kulanu, and to a lesser extent, Israel Beiteinu and possibly Shas) don’t necessarily support a two-state solution that anyone but them would recognize as one.

That’s going to present some difficulties for U.S. politicians. Obama is very likely to opt for some kind of pressure, either in the form of presenting an American framework for a two-state solution or, possibly, through a Security Council resolution pushing for an end to the occupation. How will Congress react?

Republicans will have an opening to fully back Netanyahu against Obama once again. But doing so also means joining him in practical opposition to a two-state solution. For Democrats, it will be very nearly impossible to do that, no matter what domestic pressures are brought to bear on them. The mainstream Jewish community continues to back a two-state solution. If its leading institutions try to follow Netanyahu down his path, the schism in the Jewish community will widen, and a lot more mainstream Jews will be raising their voices in opposition to Israeli policies.

In such a case, the Israeli opposition could conceivably rally. Likud’s dramatic and surprising victory overshadows the fact that the second, third, and fourth largest parties in the next Knesset will be in the opposition. But the number three party, the Joint List, is composed entirely of parties with which no mainstream Israeli party — except the left-wing Meretz, which looks like it will only have four seats — will join forces. That’s because the Joint List is made up of three small Arab parties and one Jewish-Arab communist party.

So, although the opposition controls some 53 seats, they come out of this election weaker than that because of the way the Arab parties are viewed in Israel. That’s going to blunt the opposition’s already weak influence within the Knesset, making it harder to even slow down settlement construction, let alone find an agreement with the Palestinians and end the occupation.

The only, very thin, hope is that the United States and Europe are finally so fed up with Netanyahu and the Israeli right’s adamant refusal of peace that they’ll finally exert significant pressure. Although it seems likely that the United States and European Union will do something, it’s far less likely that they’ll do anywhere near enough for either the Israeli government to feel the pressure or for the Israeli populace to grow concerned enough to take action.

Mitchell Plitnick is the Program Director at the Foundation for Middle East Peace and the former Director of the U.S. Office of B’Tselem.