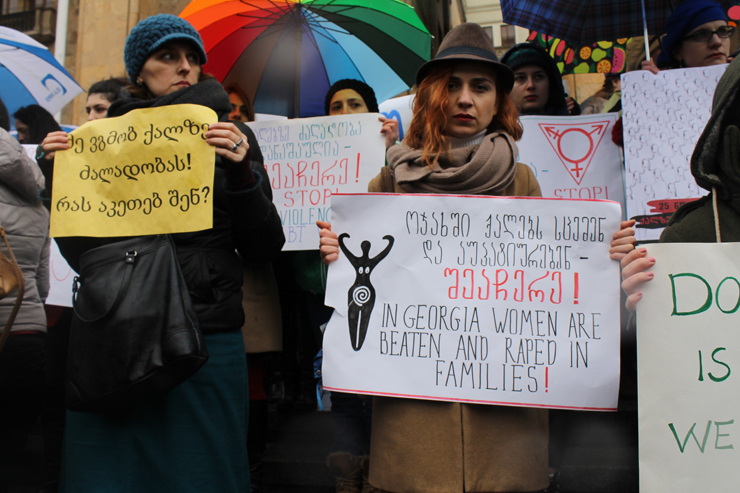 A New Women’s Movement in Georgia Takes on Misogynistic Violence

Outrage over domestic violence is giving new life to women's movements in Georgia and throughout the South Caucasus.
By Krista Walton Potter | December 12, 2014

Thirty-three year old Maka Tsivtsivadze was teaching her English class at Ilia State University in the Georgian capital of Tbilisi when her former husband arrived at her classroom unexpectedly. Maka left her students in the room and joined him in the university hallway. There he shot her several times and killed her. Then he turned the gun on himself.

Maka is just one of 24 women in Georgia who were murdered this year in domestic-violence related incidents. Cases of serious domestic violence are on the rise in Georgia. Last year, 21 women were murdered, and six were killed in 2012.

In fact, violence against women in Georgia is distressingly common.

A survey conducted by the Anti-Violence Network Georgia found that one in three women experiences some form of domestic violence, 58 percent of women don’t feel safe on the streets, and nearly half don’t feel safe inside their own homes.

But amidst this tragedy, there is cause for hope. Global Fund for Women’s allies on the ground in Georgia report that the recent murders have led to renewed and increased motivation among Georgians to call for greater protections for women.

“Even though patriarchal norms are very rooted in Georgian society, I think the recent killings of women alarmed many people and made them cautious about violence against women in general,” says Ekaterine Gejadze, a Global Fund for Women advisor and Program Coordinator for the Women’s Fund in Georgia. “I could sense through conversations I had with my relatives, neighbors, and friends that the issue has become important and the problem is recognized as an important one to tackle and fight against.”

Additionally, our sources on the ground say that the Georgian media has contributed more coverage to incidents of domestic violence than is typical — the result of activists’ tireless efforts to raise the visibility of violence against women. Combined with intrepid work by local women’s organizations and informal collectives, these efforts are fomenting the beginning of what many are calling the most powerful women’s movement the country has ever seen.

“The situation is devastating and heartbreaking, but there also is a positive development. It has really united citizens against violence against women,” says Mariam Gagoshashvili, Global Fund for Women’s Program Officer for Europe and Central Asia. “I have never seen greater mobilization, collaboration, and joint action in Georgia.”

On November 25, thousands of women and men across the country, organized under the name the Georgian Women’s Movement, held the largest demonstration in memory to condemn violence against women and raise awareness. As demonstrators in 24 cities and towns across Georgia gathered simultaneously, an estimated 2,000 people converged in the capital of Tbilisi.

“This was the first ever demonstration of this kind [in that it] had nothing to do with party politics and was about a social issue for women’s rights,” said Natia Gvianishvili, Program Director for the Women’s Initiative Supporting Group, a Global Fund for Women grantee partner. “There is the feeling that the women’s rights movement is gathering strength. There is an energy that we haven’t had before, with a lot of women gathered around the same cause, with the understanding that this violence is absolutely devastating and has to stop.”

Although Georgia has laws in place to improve the status of women, including laws on prevention of domestic violence, those laws are rarely enforced. Women’s rights remain a taboo topic in Georgian society, where the conservative Georgian Orthodox Church is extremely influential.

“There is a huge discrepancy between the country’s official — and quite superficial — gender equality strategy and the real situation of women and girls,” says Gejadze.”The legislative gains made in the past two decades were accompanied by growing backlash against women’s rights and gender equality. In Georgia, women still face such problems as exclusion from public and political life, violence, and rigid gender roles and stereotypes.”

Demonstrators on November 25 signed a petition that calls on the Georgian government to enforce the implementation of existing laws meant to protect women. The movement is also urging police to change their policies, improve their response to domestic violence, conduct proper investigations into all cases of femicide, and prosecute perpetrators. The petition also calls for zero tolerance of violence against women. Local women’s rights activists say this kind of public women’s rights activism — especially from unaffiliated citizens of all ages and genders — is unprecedented.

The movement is also showing signs of uniting women’s rights and LGBTQI advocates in Georgia. One of the other victims this year was the transgender activist Sabi Beriani, who was murdered in her home in November. “Some of the demonstrations had photos of the murdered women printed out, and they included Sabi,” says Gvianishvili. “Our society is so homophobic and transphobic, so it was very touching to see that solidarity.” The 25-year-old Beriani often appeared on television speaking out for transgender rights. Georgian LGBTQI rights groups are now calling for her murder to be classified as a hate crime.

For now, women’s rights advocates remain hopeful that the tide is changing in support of greater women’s human rights, starting at the grassroots level. “We hope to raise awareness of the public to change their thinking so that violence against women is considered a public concern rather than just a private issue,” says Gejadze. In the November protests, “we saw exceptional solidarity among women being united under the same cause. We hope that this will continue and we will see the emergence of a bigger and more influential feminist movement.”

Although there have been attempts in Georgia and its neighboring countries to research the prevalence of violence against women on a larger scale, attaining consistent results has been challenging, even within one country, let alone the region. Activists in the South Caucasus region are reporting cases of femicide and gender-based violence more than ever before, which may mean there is indeed growing violence against women or may mean simply mean that a long-standing issue has finally surfaced.

“The sensitivity of the issue of violence against women, together with the lack of public recognition of it as a social problem and the general lack of knowledge about its forms and manifestations, often distorts the real picture,” says Gagoshashvili. “All these factors influence both respondents and researchers, especially in former Soviet countries such as Georgia, where sociological research does not have a long tradition.”

Compared to its neighboring countries, Georgia has witnessed more legislative progress to address violence against women. For example, Georgia adopted a law against domestic violence in 2006, which has since been modified several times. Although Azerbaijan also adopted an anti-domestic violence law in 2010, Armenia does not yet have one in place, despite the tireless advocacy of Armenian activists.

Although activists are breaking the taboo around violence against women and more actively speaking out against it, a strong anti-feminist backlash has also taken place in the South Caucasus, especially in Armenia and Georgia. “Attempts by women to liberate themselves from violent relationships, from rigid gender roles, and from discrimination are often met with outrage and more violence,” explains Gagoshashvili. “This is a critical moment in history: activists need to resist the backlash to maintain the gains they have made in the past two decades and make new achievements toward gender equality.”

Foreign Policy In Focus guest columnist Krista Walton Potter is the digital communications and editorial manager for the Global Fund for Women.