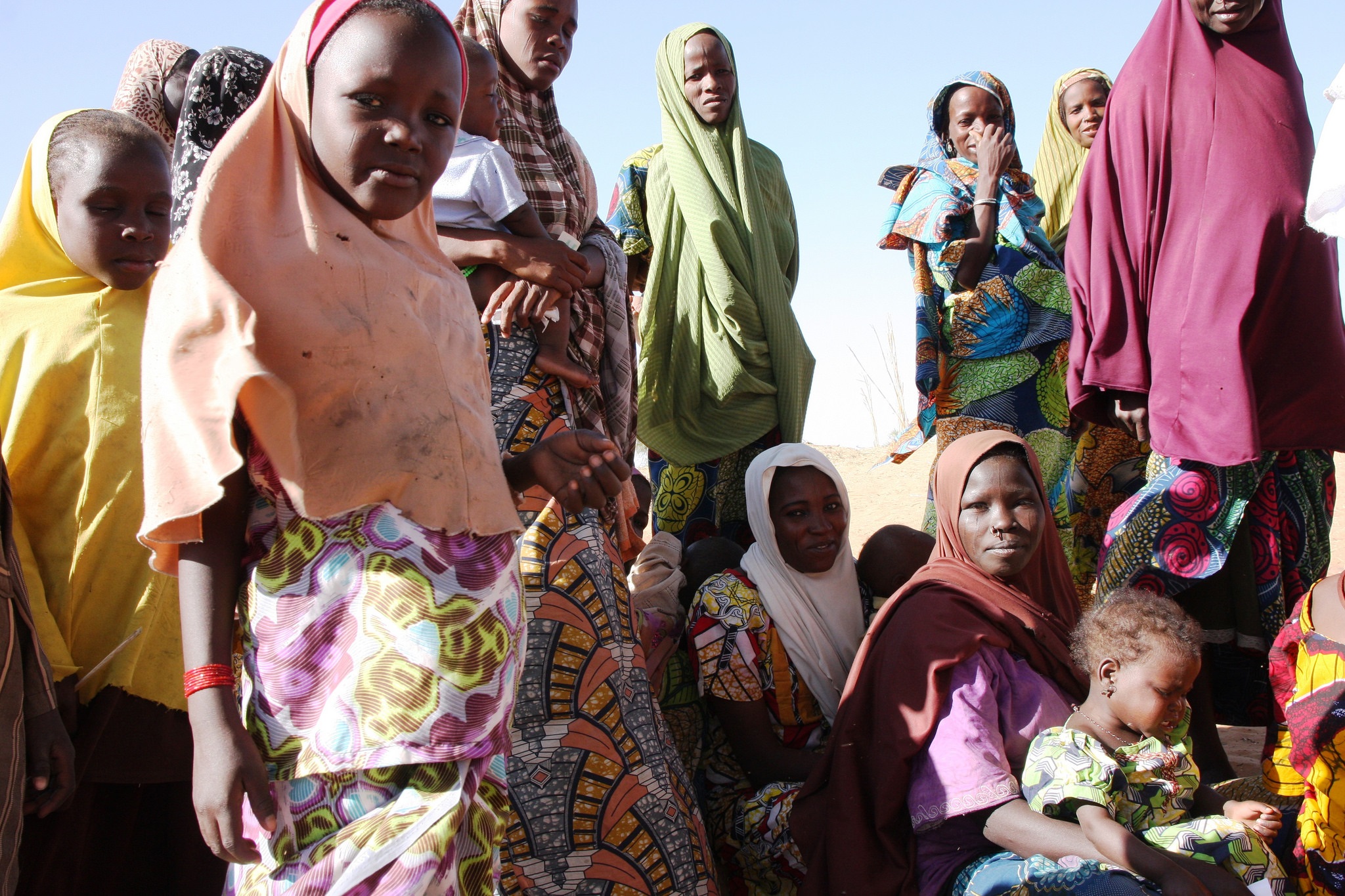 Nigerian Women in the Crosshairs

Amid a delayed election and a horrific Boko Haram insurgency, Nigerian women and girls are increasingly becoming targets — and tools — of violence.
By Krista Walton Potter, Anna Tenuta | March 9, 2015

The Nigerian authorities recently postponed elections that had been scheduled for February, ostensibly to give them more time to fight Boko Haram, the militant Islamic extremist group with ties to the Islamic State and al-Qaeda. The delay heightens the already intense levels of fear and instability in the country.

Of particular concern is the safety of Nigeria’s women and girls, who are increasingly becoming targets — and tools — of violence.

“I really fear for this country in the sense that I think that Boko Haram will escalate the violence — and women and girls are instruments in this battle,” says Udy Okon, the executive director of the Youth Alive Foundation, a non-profit focused on youth empowerment and advocacy, especially for girls and young women. “They’ve been used to set off bombs, they’ve been kidnapped, they’ve been raped. I think Boko Haram now knows that when they attack women and girls, they get attention. They get the world to notice.”

In recent months, Boko Haram has reportedly engaged in widespread rape and used girls as young as 10 years old as suicide bombers.

“What does a 10-year-old girl know about throwing a bomb somewhere? She doesn’t even know whose side she’s on,” says Christiana Okechukwu, president and CEO of the Inwelle Study and Resource Center in Enugu, Nigeria, a Global Fund for Women grantee focused on girls’ education and using access to technology to empower girls. Okechukwu calls it “scary” that girls are being manipulated in these ways and says that the increased violence in the country means that “girls’ vulnerability is heightened.”

In a brutal and deadly massacre on January 12, terrorists invaded the town of Baga, launching grenades, pursuing residents on motorcycles before shooting them down, and burning people in their homes. Many of the estimated 2,000 victims in Baga were women, children, and the elderly who “could not run fast enough” from the assailants. Some survivors report that Boko Haram fighters have raped the women who remain in Baga.

“Boko Haram has been deliberate and opportunistic in their attacks against women’s freedom. Women and girls have remained vulnerable and exposed,” said Saudatu Mahdi, secretary general of WRAPA, which empowers women and is mobilizing women to vote in this election. “They are either left behind by fleeing family heads or deliberately taken away as spoils of the attacks of the insurgents.”

In response to the uptick in attacks, authorities announced that the election, originally planned for February 14, would be postponed six weeks to March 28, in order to give the military time to make polls safer for voters. However, many Nigerians doubt that this was the real reason for the delay. Some speculate that the incumbent, President Goodluck Jonathan, wanted more time to campaign.

“People are not happy about it — they feel that the reasons given are not the real reasons,” says Okon. “If we’ve been trying to do something about Boko Haram for so long, what’s going to be different in six weeks?”

Boko Haram’s attacks will certainly affect Nigerian’s ability to vote. The violence has displaced about 1.5 million people, many of whom will not be able to vote. In large parts of the country’s northeast, violence by Boko Haram may impede polling.

Beyond Boko Haram, the election could bring additional acts of violence. The previous election in 2011 resulted in unprecedented violence, with more than 800 people killed as long-standing ethnic and religious tensions came to a head.

“People have concerns that this postponement might actually increase violence — the tension is higher now,” Okon adds. “We’re trying to amplify the message [to young people] to abstain from violence. We really don’t want the country to descend into chaos.”

Bring Back Our Girls

Activists say that no matter the outcome of the election, the government must place a greater emphasis on the security of women and girls, who are increasingly the targets of Boko Haram.

Although last year’s #BringBackOurGirls social media campaign calling for the release of the 273 schoolgirls that militants kidnapped from the classroom briefly shone a spotlight on the issue, most of the schoolgirls are still being held in captivity. And many Nigerians feel the government has not done enough to rescue the girls.

“The abduction of the Chibok girls really put the matter of security of lives of women in very sharp focus for everyone in the country so that the whole issue of security has become — whether explicitly acknowledged or not — an election issue,” said Oby Ezekwesili, who co-founded the Bring Back Our Girls movement in Nigeria to demand government action for the kidnapped schoolgirls. “The [newly elected officials] are going to have to hit the ground running trying to prove to Nigerians that the security of all citizens — especially women — matters to them.”

Some of the candidates have expressed similar concerns. “We believe that there is faulty intelligence and analysis,” the leading challenger for the Nigerian presidency, Muhammad Buhari, said about the government of President Goodluck Jonathan. “They ought to know [the location of] the Chibok girls, who have been abducted for more than 10 months now.”

In Nigeria, as in many countries, women’s rights groups provide an early warning system for systematic violations of women’s and girls’ human rights. “Women’s groups in Nigeria were reporting on increased kidnappings and the need to invest more in safety and security for women and girls more than a year before kidnapping of the schoolgirls in Chibok,” says Jane Sloane, Global Fund for Women’s vice president of programs.

Okechukwu emphasized the need to bridge ethnic divides once and for all in order to drive the country forward. “More people must forget about personal interests and come together for the sake of girls and women,” she says, adding that the elected leader must be ready to bring people together at this critical time. She concluded that Nigerian voters need to ask themselves, “Who is going to make Nigeria the great country it should be?”

Krista Walton Potter is the digital communications and editorial manager for the Global Fund for Women. Anna Tenuta is the group’s communications manager. Both are guest columnists for Foreign Policy In Focus.