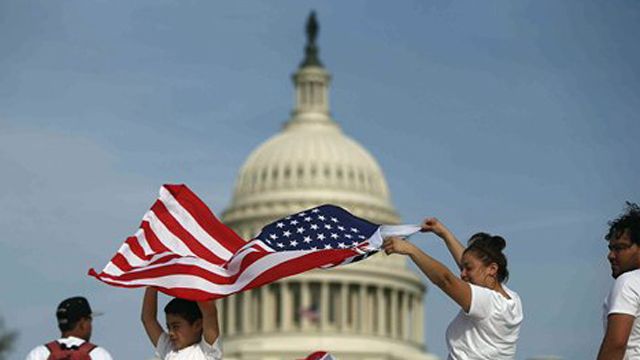 No Immigration Reform at All

More than anything else, the Senate immigration reform bill is really a continuation of old policies.
By María Isabel Verduzco | July 15, 2013

The Border Security Opportunity and Immigration Modernization Act, created by a bipartisan group of eight U.S. senators, recently passed the U.S. Senate and will soon be deliberated in the House of Representatives, where anti-immigrant legislators are likely to give it a chilly reception.

This initiative has been broadly promoted by the Obama administration, and it has been well received in public opinion—mainly because it aims to provide a path to citizenship for millions of foreign workers and their families, almost 30 years after the amnesty resulting from the 1986 immigration reform.

Although it is not going to “fix the broken immigration system of the United States”—a promise that helped Barack Obama win a large majority of Latino votes in his second presidential campaign—undoubtedly approval of this initiative will satisfy the president’s more populist expectations.

But little has been said about the limitations and possible negative effects of the law were it to pass. Will it really contribute to resolving the problems related to immigration in the United States?

House Republicans have already indicated that they have no interest in taking up a comprehensive bill, planning instead to consider incremental reforms. Still, the three main components of the Senate legislation—”border security,” a pathway to citizenship, and an expansion of work visas—are likely to resurface in the House debates. Each presents unique obstacles.

Border security, as expressed in the legislation’s very name, is one of two major elements of the bill. In this sense, it’s not really an immigration reform at all—the emphasis on border control is no departure at all from current policy. To the contrary, it proposes that the U.S. government continue undertaking the same actions to control the border that it has been using since at least 1994, only now with greater intensity.

The initiative only proposes measures for the southern border. They include: continuing to expand the budget for border control, building walls, increasing the number of agents on the southern border (including military agents), and installing more land and aerial surveillance equipment. If this law is approved, Obama will continue on with the same border control mechanisms that have caused the deaths of more than 7,500 migrants on the U.S.-Mexico border.

Beyond treacherous journeys through the desert, violent confrontations with border patrol agents, and indefinite detention in the United States, the ultimate violence of border control is deportation. The first Obama administration enacted the largest number of deportations in U.S. history, expelling a total of about 1.4 million people—one and a half times the number of deportations that occurred during both administrations of President George W. Bush.

Under the restrictive immigration policy that President Bill Clinton initiated in 1994, the logic of detentions was one of “catch and release.” That is, detain undocumented migrants near the border and deport them to their country of origin without making criminal charges.

In recent years, a different and more harmful deportation policy has been in effect – one that consists of looking for people in irregular situations in every state of the country, capturing them in their workplaces, and returning them to their countries of origin, without regard to their length of residency in the United States. This has had a terrible impact on migrants’ families, creating tremendous emotional and economic stress when a family member is expelled from the country. We don’t know the exact number of families in this situation, but the Applied Research Center calculates that there are more than five thousand minors who have been left in the custody of the U.S. government as a result of their parents being deported.

To carry out this form of detention and deportation, the government criminalizes people who lack immigration documents. While in 1995 more than 90 percent of undocumented immigrants were captured on the border and returned without criminal charges, in 2011 more than half the people were detained far from the border zone and, of the total number repatriated, about a quarter received criminal charges.

According to Jorge Durand’s analysis of available data about Mexicans deported in 2011, it’s possible that we are seeing a “specific persecution” by profiling. In other words, before being deported, they are charged with the crime of “looking Mexican.”

The second core theme is the possibility that at least 11 million immigrants, the majority of whom are Mexicans, will be able to regularize their status in the United States. However, there are few guarantees that this will be possible.

The families able to apply for a provisional immigrant status are the ones that arrived in the United States prior to 2012. To initiate the process, they will have to pay a fine of $500. The process to acquire residency with a green card will last at least 10 years, and will be awarded only to those who have had a continuous presence in the country, paid taxes, been regularly employed, learned English, and learned the laws and civil regulations. To obtain a green card, they will need to pay another $1,000 fine.

This 10-year period is double the usual length of time. And it places immigrants in a situation of greater vulnerability, because if they were ever to face a problem with the justice system, their process would be stopped and they could be deported to their country of origin. This measure could potentially lead to an increase in deportations and the further restriction of immigrants’ rights. It could even be an invitation for various federal and local authorities to continue racially based harassment of immigrants and Latinos.

This, of course, presumes that House Republicans will permit any pathway to citizenship at all, which appears increasingly unlikely.

The third primary initiative involves increasing the number of H-1B visas given annually to qualified foreign workers. It would go from 110,000 to 115,000 and—in exceptional circumstances—up to a maximum of 180,000. This would depend on the labor market conditions of the United States.

This is not a change in approach, merely an increase in quantity, to respond to the U.S. economy’s need for foreign workers. It keeps the process of recruiting workers in the hands of private companies, so that the government does not assume any responsibility for ensuring that employers comply with even the most minimal labor standards. Moreover, given the failure of the U.S. government to develop bilateral accords with the governments of countries from which workers are recruited, there are no possibilities for those governments to be involved in—and take responsibility for—regulating the working conditions of people from their countries.

Apparently, the conditions to apply for other temporary work visas (H2A and H2B) will also remain the same. These visas have proven conducive to abuse during the recruitment process and in working conditions for foreign workers.

The Mexican government, which until now has decided to remain silent, should have much to say about this initiative, and could do so without infringing on U.S. sovereignty—this is, after all, just as much a Mexican issue. For more than a decade Mexico has been acting as a migration police force at the southern border of the main country demanding foreign workers. And a sizable portion of Mexico’s economy relies on remittances from Mexican nationals working in the United States.

It is clear that “immigration reform” is not going to “fix a broken immigration system.” And it is certainly not oriented toward implementing the measures recommended to the U.S. government by international human rights organizations.

María Isabel Verduzco is a contributor to Foreign Policy In Focus.