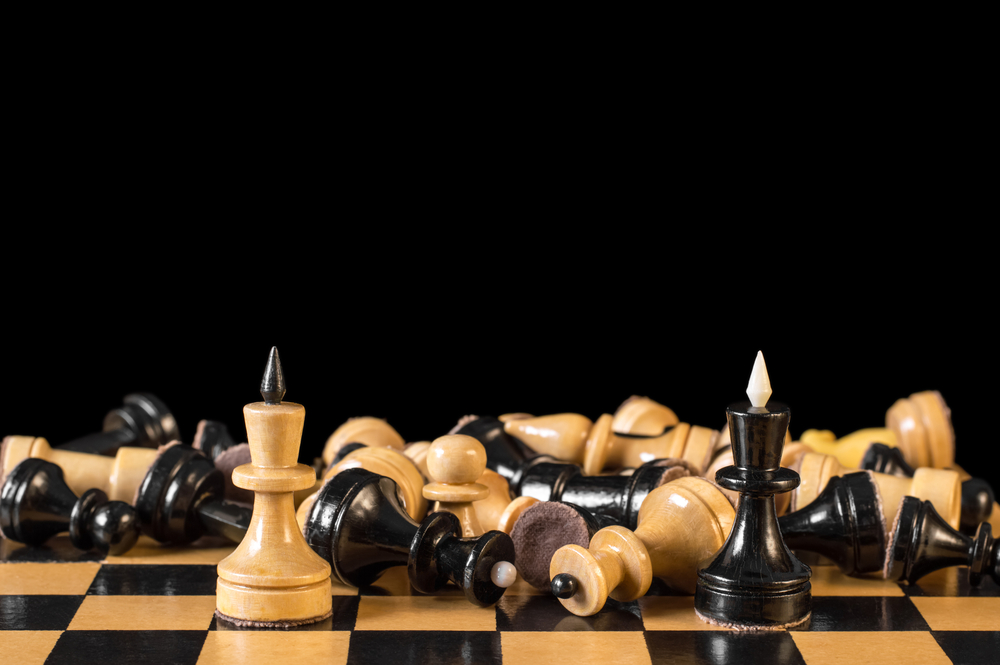 Dealing with stalemates between Russia and Ukraine, environmentalists and climate change, and COVID and humanity.
By John Feffer | May 11, 2022

Imagine an Olympic final in basketball, not unlike the one last summer between the United States and France. The score is tied in the final minutes, and tension is mounting among the flag-waving partisans in the stands.

France is in possession of the ball when something strange happens. A sudden fog descends upon the play. The fans stand up to see what’s happening on the court. They try to clear away the fog with their hands, but to no avail.

When the fog finally clears a few frustrating minutes later, the game appears to be over. Players from both sides lie on the court, injured, some of them badly.

The referees confer. They make an announcement.

There is no winner.

It’s not a tie. There will be no overtime. The result of the game is just…undecided.

The fans stamp their feet and howl. It doesn’t matter. This year, there will be no medal winners: no gold, no silver, no bronze.

Of course, this scenario is absurd. The Olympics are designed specifically to produce winners. Individuals and teams battle one another to achieve clear and undisputed victories. There is no such fog in sports.

But that doesn’t prevent politicians from attempting to prove their decisiveness and the efficacy of their policies by announcing that they have accomplished one mission or another.

Last year on July 4, for example, Joe Biden declared a kind of victory over COVID-19 in his speech celebrating Independence Day. “Today, while the virus hasn’t been vanquished, we know this: It no longer controls our lives, it no longer paralyzes our nation and it’s within our power to make sure it never does so again,” he said.

It was, like George W. Bush’s infamous declaration of “mission accomplished” in the Iraq War on May 1, 2003, a premature pronouncement. Several new variants of COVID-19 subsequently swept through the United States. Around 400,000 Americans have died of the disease since Biden’s announcement – that’s more than any country other than India and Brazil has lost during the entire pandemic.

This month, the United States is passing the grim milestone of a million COVID deaths, the largest total of any country. With another super-infectious variant on the rise, Americans might well be asking themselves, “What does victory in the fight against COVID look like?”

A thick fog of indeterminacy has descended upon the human race, and we all shudder to imagine the casualties that lie behind this particular veil of ignorance.

The Failures of the Pandemic Era

It was easy to blame Donald Trump for the astonishing failures of the United States at the outset of the COVID pandemic. As president, he was slow to react to the crisis, prone to believe puerile nonsense rather than scientific evidence, and reliant for the most part on advisors who were similarly ill-equipped to handle serious matters.

But there was an underlying problem that predated Trump. The United States had a data collection problem.

As the podcast 99% Invisible outlines in a recent episode, the United States did not have a system in place when COVID-19 hit that could provide even the most basic health information such as infection rate, number of tests, and rate of hospitalization. States gathered some of this information but there was no federal clearinghouse for the data. In response, a group of volunteers had to step in to form the COVID Tracking Project to collect the info from the states.

This information was necessary for such basic steps as contact tracing, allocation of resources, and accurate projections. The United States could do none of this properly. It was as if a fog had indeed descended on the country, for policymakers and healthcare professionals were in the dark about how to minimize the impact of the new pathogen.

Thanks to the volunteers, the data collection became more precise. But absent a federal initiative to set up a robust emergency response system, the data didn’t necessarily help responders navigate in the dark.

To give one example, I received an automated contact-tracing call last fall approximately 10 days after a possible exposure. I was informed that someone on the Amtrak train I’d taken to Massachusetts had contracted the disease. I was not told whether I’d been sitting next to the infected person or six cars away. And the ten days between potential exposure and notification provided me with ample opportunity to unwittingly pass the disease on to others.

Since the introduction of vaccines, a different problem has handicapped Americans. Of the people who died since Biden’s announcement on July 4, approximately 60 percent could have survived exposure if they’d simply gotten vaccinated beforehand, according to a Kaiser Family Foundation study. With the blood of over 200,000 people on its hands, the anti-vax movement has been the most successful mass murderer in modern U.S. history.

Given these two problems, our “victory” over COVID will not come any day soon. And when it does take place, it will likely resemble our efforts to defeat influenza/pneumonia (over 50,000 deaths in 2020), gun violence (around 45,000 deaths in 2020) or the opioid crisis (over 100,000 deaths from overdose in 2021). Even as the COVID mortality rates decline, the disease will remain endemic as the deadly background static to our lives.

The Russian government celebrated its victory over Nazi Germany this week by parading soldiers through the center of Moscow. Russian President Vladimir Putin gave a speech defending his invasion of Ukraine by connecting it to the battle against the Nazis 80 years ago.

“You are fighting for our Motherland, its future,” he told the gathered troops, “so that nobody forgets the lessons of World War II, so that there is no place in the world for torturers, death squads and Nazis.” Given the war crimes that Russian troops have committed in Ukraine, Putin’s remarks were positively Goebbels-like in their disinformation.

Since the outset of this latest phase of the war against Ukraine, Putin has defined “victory” in maximalist terms: the absorption of as much of the country as possible into Russia proper and the replacement of the “Nazi” government in Kyiv. Thwarted in his land grab by a determined Ukrainian population, Putin has now focused on consolidating Russian control over what modest territorial gains his military has made in the eastern Donbas region and along the southern coast connecting Crimea to the Russian mainland.

The Kremlin may well redefine “victory” to connote a “frozen conflict” like the ones in Georgia and Moldova. There, Russia has managed to diminish the sovereignty and geopolitical maneuverability of two countries by supporting secession movements within their territories. It is now in the process of applying this model to Ukraine. A military stalemate at new borders favorable to Russia, border changes unrecognized by the international community, and a Ukraine so hobbled by the conflict that it remains a shadow of its former self: that seems to be Putin’s new game plan.

For Ukraine, “victory” also has its minimalist and maximalist versions. According to the minimalist scenario, negotiations yield a ceasefire, the Kremlin stops shelling Ukrainian cities, and Russian troops are pushed from as much of Ukraine as possible. But there are some in Ukraine who would prefer to take advantage of all the new weaponry pouring into the country to expel Russia completely, including from the Donbas and Crimea.

Given all the horrors that have taken place so far in the Ukraine war, it’s hard to talk of “victory” in any absolute sense. Russian troops out (of as much of Ukraine as possible) and an end to the killing on the one hand and Ukrainian neutrality on the other might be the closest thing to a viable compromise that negotiators can achieve at this point. Both sides will have sustained considerable death and economic damage. There’s no victory in that.

Victory over the Planet?

Humans have long waged a war of conquest against this planet. We have invaded pristine places, killed the species that preceded us, dug up the buried treasure, and despoiled the landscape like drunken, pillaging soldiers. Then we have had the gall to hold press conferences to declare “victory” in the form of “extraordinary economic progress.”

That “victory,” however, has given us an enormous hangover in the form of climate change. The headaches are myriad: droughts and forest fires and superstorms and the drip-drip water torture of rising seas. Our hangover cure has been to maintain the addiction to over-consumption but change the drug of choice from fossil fuels to something more “sustainable” like lithium (for batteries). Talk about hair of the dog.

Various Green New Deals in the Global North are presented as “win-win” policies that pull people out of poverty and save the planet at the same time. That would indeed be a win-win, but again the fog of wishful thinking obscures the fact that communities throughout the Global South are making all the sacrifices to achieve this “victory” over climate change. Of course, a continued reliance on fossil fuels would produce a blowout loss, so indeterminate outcomes are better than obviously bad ones.

But let’s focus on the fog for a moment.

In his novel The Buried Giant, Kazuo Ishiguro imagines a strange English past in which a memory-destroying mist has settled upon the land. This fog has the singular quality of suppressing all memory of past animosities in a population divided between warring Saxons and Britons. It’s a powerful metaphor for the amnesia that societies experience, from one generation to the next, that allows them both to go to war (who remembers the atrocities of the last conflict?) and to establish some semblance of peace (who remembers why we even went to war last time?).

Already the fog of forgetfulness is settling on a supposedly post-COVID America as airline passengers throw their masks in the air in jubilation and celebrities gather for super-spreader events even as they joke about attending super-spreader events. It’s astonishing that, while living through the worst disease outbreak in U.S. history, Americans are doing whatever they can to normalize the horror.

The fog of forgetfulness has also settled on the Russian soldiers who have marched out to slaughter their neighbors, the very people their leader has identified as their brothers and sisters. What happened to the bonds of intermarriage, of economic trade, of mutual tourism?

The fog of forgetfulness has allowed humanity to collectively spew more carbon emissions in 2021 than ever before in history, after annual output actually decreased sharply during the pandemic in 2020.

It’s naïve to expect that we can declare victory over all these different fogs. Such fogs seem to be a constitutive part of the human experience. And, of course, a little fog can be useful sometimes. If we thought about nothing but the horrors of the pandemic—the suffering, the death—we might not be able to get out of bed in the morning.

Or consider what must happen on the frontiers of Europe, after the last shots are fired and the last war crimes are investigated. Eventually Russians and Ukrainians will again have to learn how to live side by side peaceably. No one will celebrate that day, just as the French and the Germans do not commemorate the moment when they began to forget all of their mutual atrocities. But it will be a kind of victory nonetheless.