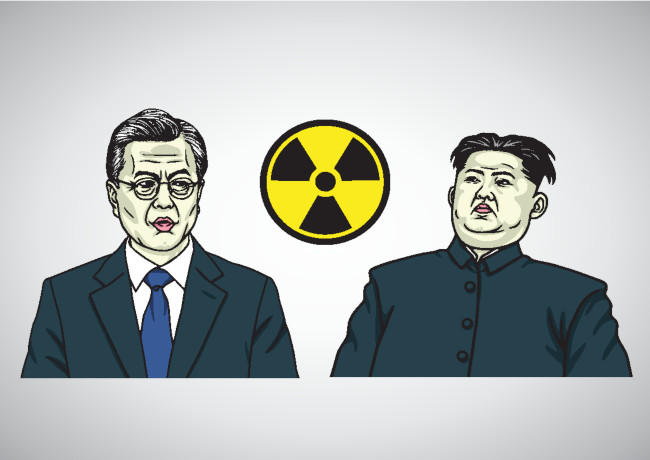 Nuclear weapons have held the world hostage for more than 70 years. Although they possess terrifying power and the world has come close to nuclear war on several occasions, these weapons have only been used twice, in 1945, by the United States against Japan.

Advocates of deterrence believe that nuclear weapons actually kept the peace during the Cold War. The United States and Soviet Union, according to this theory, did not attack each other directly because of the fear that one side or the other would launch an ICBM, the conflict would quickly escalate, and the world would go up in smoke.

Over the course of the nuclear era, there have been plenty of conventional wars. Those conflicts have left millions dead, injured many more, and created today’s unprecedented refugee crisis.

The United States has expended a great deal of energy to prevent other countries from acquiring nuclear weapons. It hasn’t eliminated its own arsenal, nor has it of late vigorously pursued arms control agreements with Russia that would achieve global disarmament any time soon. Meanwhile, the United States has initiated or supported a disproportionate number of wars around the world, including ones in Afghanistan and Iraq, Syria and Yemen.

In general, the United States has prioritized nuclear non-proliferation over the prevention of war.

That helps to explain the muted U.S. reactions to the recent Pyongyang summit between North Korean leader Kim Jong Un and South Korean President Moon Jae-in. But it doesn’t make those reactions any less frustrating.

As a result of the third inter-Korean summit, the two countries have agreed to a remarkable set of security measures. The two Koreas will cease military exercises along the Military Demarcation Line (MDL), establish a no-fly zone above the MDL, and establish a maritime peace zone around the Northern Limit Line in the West Sea. Even more dramatically, they announced a plan to turn the most visible symbol of inter-Korean division and hostility – the border area at the 38th parallel – into a peace zone, beginning with the withdrawal of 11 guard posts from the DMZ, the demilitarization of the Joint Security Area, and the creation of a joint team to recover remains within the zone.

And what was the predominant U.S. reaction to these momentous changes? Even though Kim Jon Un did make several proposals to move forward on nuclear disarmament, U.S. politicians and pundits focused on what was missing, namely unilateral moves before the United States reciprocates. These skeptics somehow expect North Korea to provide an inventory of the country’s nuclear capabilities, relinquish its existing weapons, or shut down its plutonium and highly enriched uranium processing facilities simply to show good faith and in the hopes that Washington will remove economic sanctions. In other words, the U.S. skeptics are not interested in the give-and-take of negotiations. They want some sign that North Korea is bending to pressure.

His Republican colleague in the Senate, Lindsey Graham (R-SC) tweeted much the same thing: “While North Korea has stopped testing missiles and nuclear devices, they have NOT moved toward denuclearization.”

“Talk is cheap,” said Bruce Bennett of Rand Corporation. “What Washington has been looking for is action.”

The Trump administration has praised the results of the recent inter-Korean summit. But here, too, U.S. officials have talked about the need to advance the denuclearization agenda.

Obviously, the U.S. preoccupation with nuclear non-proliferation has blinded the foreign policy elite to what is ultimately a more profound development. The two Koreas are not waiting for a peace treaty to replace the armistice that ended the Korean War in 1953. They’re not relying on a U.S. declaration that hostilities have ended. They are actively dismantling the very mechanisms of war on the Korean peninsula.

I don’t necessarily believe that nuclear deterrence kept the peace during the Cold War. First of all, the nuclear powers were exceptionally lucky not to have blown each other up. Second, there were plenty of hot wars during that period, including the Korean War and the Vietnam War, and several of these wars could have escalated to the use of nuclear weapons.

For these and other reasons, I think it’s important to push for nuclear disarmament. Nuclear weapons, even if they haven’t been used in more than 70 years, are extraordinarily dangerous.

But ultimately, the most important task is to prevent war – to prevent the circumstances that would give rise to the potential use of nuclear weapons. In this way, the two Koreas have gotten the order correct. They are focusing on dismantling war structures before the talks on nuclear weapons have really started.

This is a profound lesson for Americans. Instead of seeing the inter-Korean talks as a prelude to the “more important” discussions on nuclear weapons, the United States should see the denuclearization negotiations as supporting Korean efforts to end war on the peninsula.

As long as Washington’s preoccupation with nukes goes hand in hand with conflict reduction between the two Koreas, the non-proliferation agenda is part of the solution. But if denuclearization gets in the way of peace – if squabbling over the particulars of North Korea’s nuclear program disrupts the progress North and South have made on reducing tensions – then it’s part of the problem.

John Feffer is the director of Foreign Policy In Focus and the author of the forthcoming novel, Frostlands.